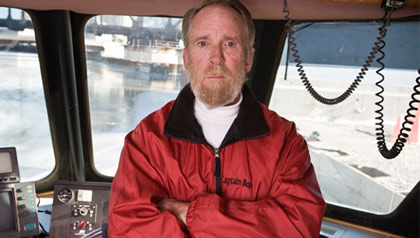 In June 2004, Elizabeth Parker took her 86-year-old husband, Robert, to an emergency room in Tomahawk with abdominal pain and nausea. He was admitted, and a few days later hospital staff told his wife he could no longer live safely at home with his multiple sclerosis and dementia and should be placed in a nursing home.

The next day, their son, Robert Parker Jr., now 67, of Milwaukee, accompanied his mother when his father was admitted to Golden Livingcenter-Golden Age in Tomahawk, a nursing home that treats patients with dementia.

"It was a stressful, traumatic time for my mother," Parker recalled. The facility's social services director brought Elizabeth a 23-page stack of documents, telling her which pages to sign and where.

Six months later, Robert Sr. fell out of his wheelchair, fractured his hip and hit his head. The wheelchair had an alarm, but no one responded immediately. He died four days later, but his fall was not mentioned as a cause of death.

"What was so upsetting was that only one nurse aide was on duty to care for between 13 and 18 Alzheimer's patients," Parker said. "My father fell just when she was trying to feed all those patients."

When the Parkers looked into suing Golden Livingcenter-Golden Age, they were stunned to learn that among the documents Elizabeth had signed was an agreement requiring any disputes be resolved through binding arbitration. Such agreements limit a facility's liability and exposure in cases of neglect, abuse or wrongful death.

Nursing homes, especially those belonging to for-profit chains, routinely use admitting documents that contain binding arbitration agreements. After an injury or death, many families are surprised to learn they have unwittingly signed away their rights to a jury trial.

Some nursing homes allow residents to bypass arbitration — with restrictions. For instance, Harmony Living Centers, which operates about two dozen assisted living centers in Wisconsin, allows residents to opt-out of arbitration if they pay an additional monthly fee of $300.

"We think the mandatory arbitration agreements aren't friendly to families. If a family member is injured or dies while in the care of a nursing home, they shouldn't have to give up their rights to take their case to court."

Parker insists the nursing home's social worker did not discuss the arbitration agreement when his mother was signing the admission papers. He has sworn that he'd have spoken up, adding that neither he nor his mother was given copies of the agreements.

On the Parkers' behalf, Milwaukee attorney Jeffrey Pitman attempted to challenge the arbitration agreements in Wisconsin circuit and appellate courts, but lost both efforts. Pitman has also argued that arbitration hearings give the facility a home-court advantage because they are usually held at the nursing home.

The Parkers' case is still pending final arbitration. Arbitrators are selected from members of arbitration associations and must be agreed to by both parties. There is no appeal of an arbitrator's decision.

Milwaukee attorney Robert Johnson represents Golden Living, which owns more than 300 Golden Livingcenters in 21 states. He maintains that arbitration agreements at its facilities are "not mandatory but strictly voluntary" and "not a condition of admittance."

Barbara Abel is a freelance writer living in Wauwatosa, Wis.