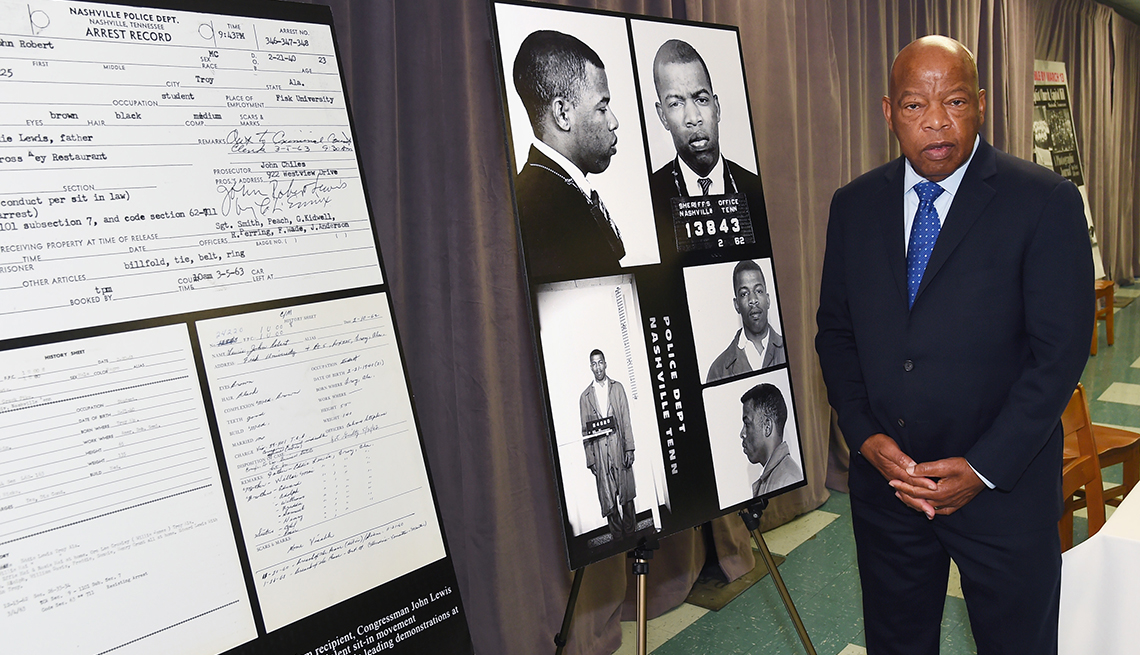 John Lewis views for the first time images and his arrest record from March 5, 1963, for leading a nonviolent sit-in at Nashville's segregated lunch counters.

As a civil rights activist at age 25, John Lewis was beaten so badly his skull was fractured, and the TV images in 1965 from Bloody Sunday in Selma, Alabama, forced a nation's awakening to racial discrimination.

Today, at 79, Lewis is facing an even more deadly foe: advanced pancreatic cancer.

"I have been in some kind of fight — for freedom, equality, basic human rights — for nearly my entire life,” the Democratic congressman from Georgia announced in late December. “I have never faced a fight quite like the one I have now."

Lewis is the last survivor of the Big Six civil rights activists — a group once led by the Rev. Martin Luther King Jr. — who helped organize the 1963 March on Washington for Jobs and Freedom.

And Lewis made clear that he has no plans to step aside from the House seat he has held since 1987. Since the House returned to session Jan. 2, he has not recorded a vote.

"I may miss a few votes during this period. But with God's grace I will be back on the front lines soon,” Lewis said in December. “I have a fighting chance."

John Lewis was the youngest of the leaders of the six civil rights groups that organized the Aug. 28, 1963, March on Washington for Jobs and Freedom. Martin Luther King Jr., who was assassinated in 1968 at age 39, was the first and youngest to die.

Doctors told Lewis that recent medical advances have made his type of cancer treatable in many cases, he said. He added that “treatment options are no longer as debilitating as they once were."

Yet the five-year survival rate for late-stage pancreatic cancer, cancer that has metastasized to other parts of the body, is less than 3 percent, according to the National Cancer Institute. Almost 57,000 people were diagnosed with pancreatic cancer in 2019.

Jeopardy! host Alex Trebek, only a few months younger than Lewis and also battling stage 4 pancreatic cancer, had a message of support for Lewis earlier this month as he talked about his prime-time special, Jeopardy! The Greatest of All Time.

"We're starting a new year, and let's see if we can't both complete the year as pancreatic cancer survivors,” Trebek said.

Sometimes called the “conscience of the Congress,” Lewis led hundreds of protesters across the Edmund Pettus Bridge in Selma. He was at the head of the march when police knocked him to the ground and beat him.

The nationally televised images forced the country's attention on the racial inequalities that King and so many others were fighting. Though King was not in Selma on Bloody Sunday, after Lewis was injured, King returned to the city for the two other protests that finally resulted in the four-day march to the state capitol in Montgomery.

Lewis turned to politics in 1981 when he was elected to the Atlanta City Council.

In 2011 he received the Presidential Medal of Freedom from President Barack Obama, who also marched with Lewis hand in hand in Selma on the 50th anniversary of the Bloody Sunday attack.

House Speaker Nancy Pelosi was among those who sent her best wishes to Lewis after his illness was announced.

"We are all praying for you following this diagnosis, John. Know that generations of Americans have you in their thoughts and prayers as you face this fight,” she said in a statement. “We are all praying that you are comfortable. We know that you will be well."