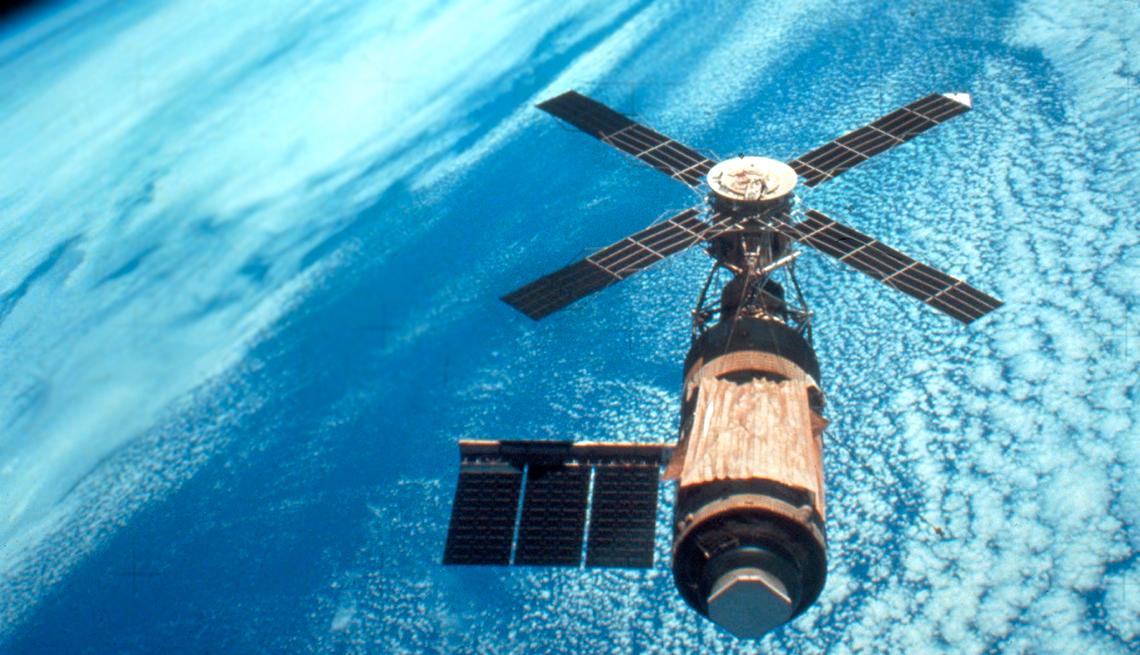 The 82 ton Skylab space station re-entered the Earth's atmosphere on July 11, 1979 — and parts of it landed in Western Australia.

Stop us if this sounds familiar: A massive space station may be about to fall to Earth. There are considerable questions about where the debris will fall, or how much will make it through the atmosphere, or whether it might be a threat to people.

That’s the scenario involving the Chinese space station Tiangong-1, which looks like it will lose its battle with gravity in the very near future. And if this triggers a certain sense of deja vu … well, do you remember Skylab?

Skylab was a U.S. space station that orbited Earth from 1973 to 1979, when it basically fell out of the sky. It hosted three manned missions and numerous scientific experiments, but an increasing emphasis on the space shuttle program and costs of keeping crews there caused the last manned mission to end in 1974.

There were problems from the start. Space.com notes Skylab was damaged during its launch and was plagued with power issues throughout its life — issues that contributed to its eventual demise.

NASA decided to act to bring the space station down in as controlled a manner as possible. But as the day of its demise approached, things got weird.

Skylab was huge — more than 77 tons — and although NASA took steps to try to force a descent away from land, it could not absolutely guarantee that would happen. That led to twin developments: near-panic among some people, and a certain spacey entrepreneurship among others.

“In various parts of the country, wags painted X’s on their neighbors’ roofs or sported T shirts with targets on the back. Entrepreneurs sold plastic helmets and Skylab survival kits complete with bags for collecting stray parts of the spacecraft and letters suing NASA for damages,” Newsweek reported.

There were Skylab parties. The San Francisco Examiner offered $10,000 to the first person who showed up at the newspaper with a piece of the station within 72 hours of the crash.

On July 11, 1979, Skylab came down. NASA tried to divert the station toward the Indian Ocean, but some of it fell in lightly populated areas of western Australia.

In the small town of Esperance, Australia, Stan Thornton grabbed a few small fragments of Skylab and headed to San Francisco. He got there in time to claim the $10,000. President Jimmy Carter apologized to Australia for raining space junk on it. Esperance officials issued a $400 fine to NASA for littering (a fine eventually paid by a Nevada radio station as a promotional stunt). No one was hurt.

There’s still a Skylab exhibition at the Esperance Museum, featuring various pieces of debris — including a fairly hefty oxygen tank that made it through the atmosphere. Purported Skylab fragments still show up on eBay.

Despite some reports questioning their claims, Chinese officials say they have Tiangong-1 under control and will direct it to fall into “a designated area of the sea.” According to the European Space Agency the station is estimated to re-enter the Earth's atmosphere between March 31- April 1. It weighed a little more than nine tons at launch, so it’s less than an eighth of the weight of Skylab. But it’s still big, and people will still be watching to see if there will be at least a little bit of a repeat.