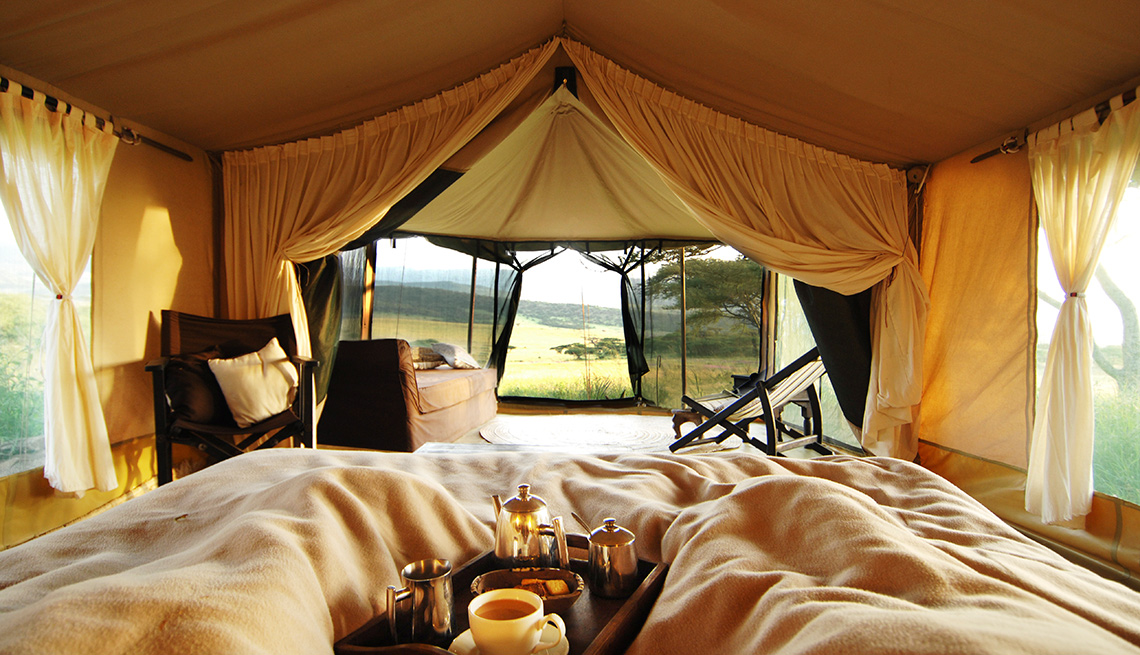 “Glamping” meaning outdoor camping with amenities and comforts not usually used when camping, gets its stamp of legitimacy in the dictionary.

The people at Merriam-Webster have thrown a new batch of words and definitions into their ubiquitous dictionary, basically codifying the use of such slang as “mansplain,” “welp” and even a word that got a passing reference in the cartoon series The Simpsons.

That word is “embiggen,” which Simpsons-heads know is part of the Springfield town logo: “A noble spirit embiggens the smallest man.” That word was made up for an episode 22 years ago, subsequently slipped into pop culture and hasn’t left. (The definition: "To make bigger or more expansive.")

There are a number of more serious entries among the 850 newcomers. For example, “Silver Alert,” defined as “a widely publicized bulletin that alerts the public when an elderly person or a person with a cognitive disability goes missing,” makes its first appearance. Also joining that phrase is “self-care,” a fairly self-explanatory entry. There are financial phrases such as “cryptocurrency” and “microcredit” — and even “initial coin offering,” defined as “the first sale of a cryptocurrency to the public conducted for the purpose of raising funds.”

Words with roots in the tech world have become a rich source for Merriam-Webster, and this wave of additions is no exception. For example, there’s a new definition of unicorn: “A start-up that is valued at $1 billion or more.” “Subtweet” (“a usually mocking or critical tweet that alludes to another Twitter user without including a link to the user's account and often without directly mentioning the user's name”) is now in the dictionary. “Blockchain” is now in there as well, as is “life hack.”

There’s still plenty of fun: “Wordie” joins older entries “foodie” and “groupie.” “Glamping” (outdoor camping with amenities and comforts not usually used when camping) gets its stamp of legitimacy.  And several mashed-up dog breeds make the dictionary, including Yorkie-poo (a cross between a Yorkshire terrier and a poodle).

Of course, you may feel this is all a "dumpster fire" (definition: "an utterly calamitous or mismanaged situation or occurrence"). Well, it appears you’ll need to just live with that, or perhaps you can "hate-watch" ("to watch and take pleasure in laughing at or criticizing") some television to get your mind off things.

Merriam-Webster assures everyone there is solid logic behind the new entries. "Each word has taken its own path in its own time to become part of our language — to be used frequently enough by some in order to be placed in a reference for all," the company states in a blog post. "If you're likely to encounter a word in the wild, whether in the news, a restaurant menu, a tech update, or a Twitter meme, that word belongs in the dictionary."