Hurricane Irma has resulted in the cancellation of a number of cruises, but cruise lines are putting the ships to work — helping areas devastated by the storm.

Royal Caribbean said Monday that it already sent a ship to hurricane-pounded St. Martin for a humanitarian stop. Another ship is on its way to St. Thomas, and it will also stop in St. Martin, to deliver goods and help evacuate people who are stranded there.

American tourists are among those stuck on the islands, and they’re telling desperate stories of survival. In an interview with ABC News, one person talked about how they moved hotel furniture to block the ocean-facing windows as Hurricane Irma plowed through.

Norwegian Cruise Lines is also sending a ship to deliver supplies to St. Thomas. Ahead of the storm the company made the decision to return some ships to their original ports in Florida and give vacationers the opportunity to end their trip early so that they could get home to secure their belongings. Other passengers wishing to continue their voyage — or unable to get a flight home ahead of the hurricane — were able to board the 4,000-passenger Norwegian Escape and sail opposite the cyclone. On Sunday, the ship safely docked in Cozumel, Mexico. Once ports are reopened, the ship plans to return to the United States. 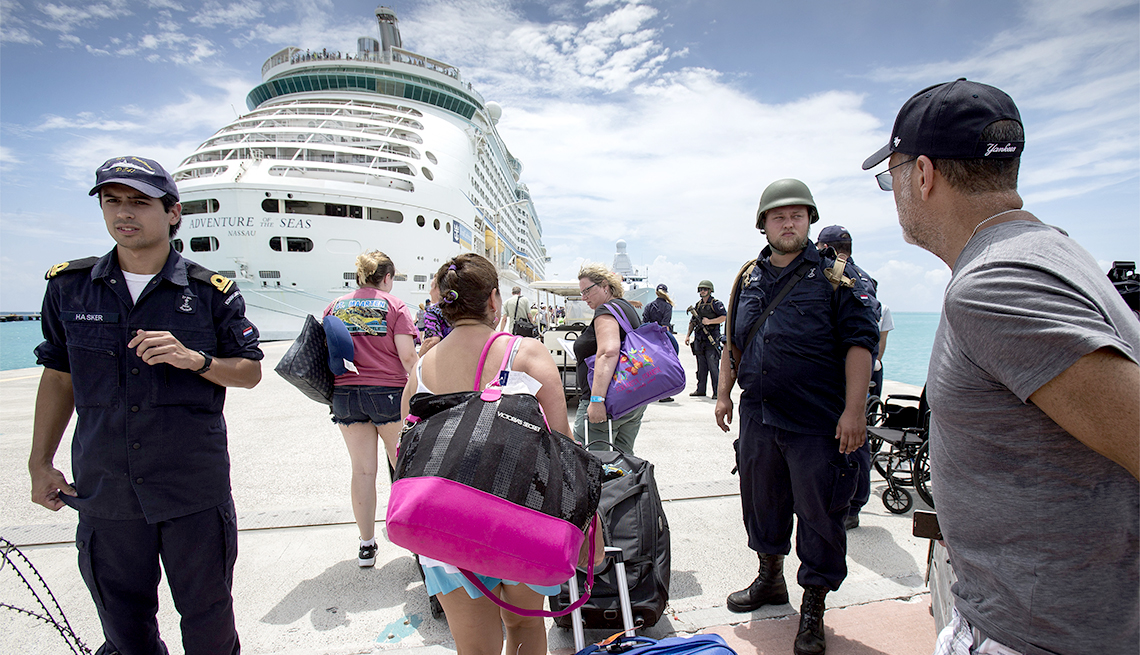 A Royal Caribbean Cruise ship arrived in St. Martin Sunday to provide support after Hurricane Irma hit the island as a Category 5 storm.

Royal Caribbean’s Majesty of the Seas is expected to arrive in St. Thomas on Tuesday. In addition to dropping off water, ice, food and other goods, the ship will offer meals to first responders, according to the Miami Herald. The ship will then take stranded tourists to San Juan, Puerto Rico, where they’ll be able to catch a flight home. The cruise line said it would also coordinate with the U.S. government to further assist in hard-hit areas, including possibly the Florida Keys.