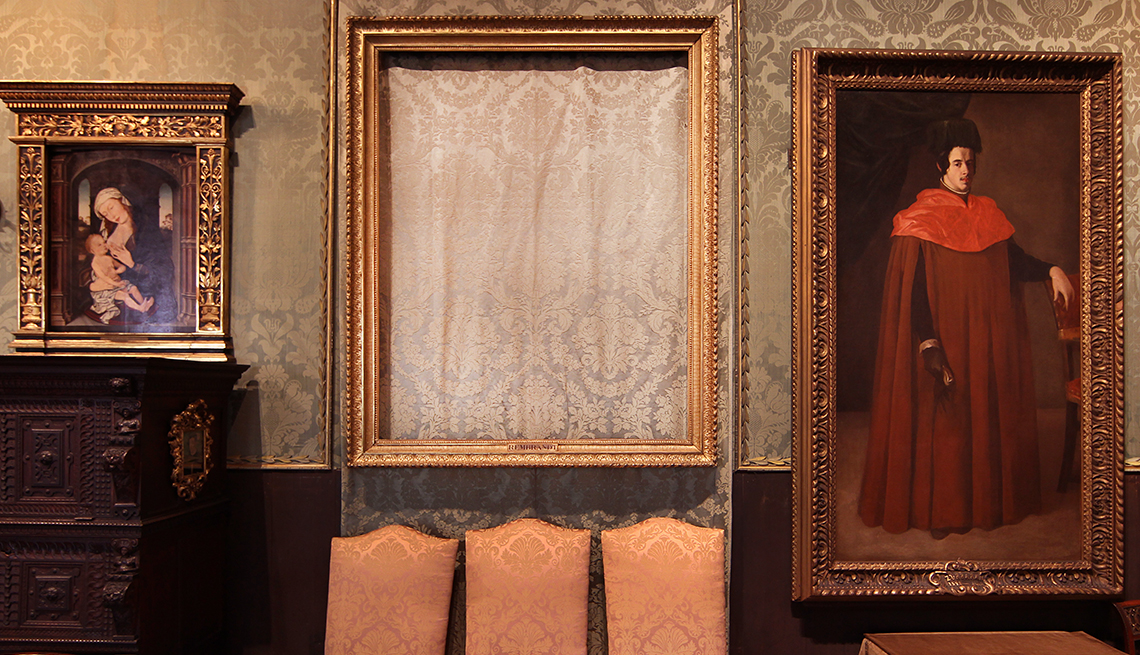 An empty frame hangs in the Isabella Stewart Gardner Museum, the site of a $500 million heist in 1990.

The story has all the elements of a great heist movie like The Thomas Crown Affair or Ocean's Eleven: Shortly after midnight on March 18, 1990, two men wearing Boston police uniforms buzz the security desk of the Isabella Stewart Gardner Museum, a private art gallery in Boston, reporting that they’re responding to a disturbance. They’re allowed into the building by 23-year-old security guard Richard Abath, whom they then handcuff and bind with duct tape to an electrical box in the museum's basement. They make their way into the museum’s display rooms, where, over the next 81 minutes, they rip and cut priceless works of art — among them Johannes Vermeer’s The Concert and Rembrandt’s The Storm on the Sea of Galilee and A Lady and Gentleman in Black from the museum's Dutch room — from their frames. The thieves and 13 pieces of artwork disappear into the dark of night.

It has been nearly 28 years since the theft that made headlines across the world, yet no amount of money has been able to entice a tip to the location of the missing art — today valued  at more than $500 million. There are just two days left for anyone in the know to claim the $10 million reward, which the museum's board of trustees increased from a long-established $5 million in May in the hope that bigger money —  even for a limited time — might make a difference. At midnight on Jan. 1, the reward reverts to $5 million.

Anyone who has news about the art is home free. The statute of limitations on the crime ran out in 1995, and the FBI — who took control of the case on the grounds that the art likely would have crossed state lines — has said it will not charge any one who voluntarily turns in the artwork. Still, nobody has come forward.

The most notable of leads came in August 1997, when Boston antiques dealer William Youngworth announced he could lead authorities to the missing paintings, in exchange for immunity and the then-$5 million in reward money. Youngworth drove Boston Herald reporter Tom Mashberg to a warehouse in Brooklyn, where Mashberg was given a quick glimpse of what appeared to be The Storm on the Sea of Galilee, as well as a vial of paint chips to verify the painting’s authenticity. While the chips showed traces of belonging to a Dutch 17th-century painting, they did not match the famous Rembrandt. Youngworth quit cooperating with the FBI shortly thereafter.

The Gardner's director of security, Anthony Amore, 50, remains optimistic. "We have received a few good calls with important information, and we hope to receive more before the end of the year," he told NPR this week. Amore says the only priority is getting the masterpieces back, telling NPR that he is "focused like a laser beam on one thing and that is recovering our stolen art and putting it back on the walls here at the museum, where it belongs." To this day, the empty frames remain hanging on walls as reminders of the missing artwork — which includes 11 paintings as well as an ancient Chinese gu and a Napoleonic bronze finial.

Two days remain on a $10 million reward, and Amore is waiting by his desk phone for anybody with knowledge of the art's whereabouts. Reach him at 617-278-5114, or send an email to theft@gardnermuseum.org. The museum guarantees confidentiality and anonymity to anyone who comes forward.