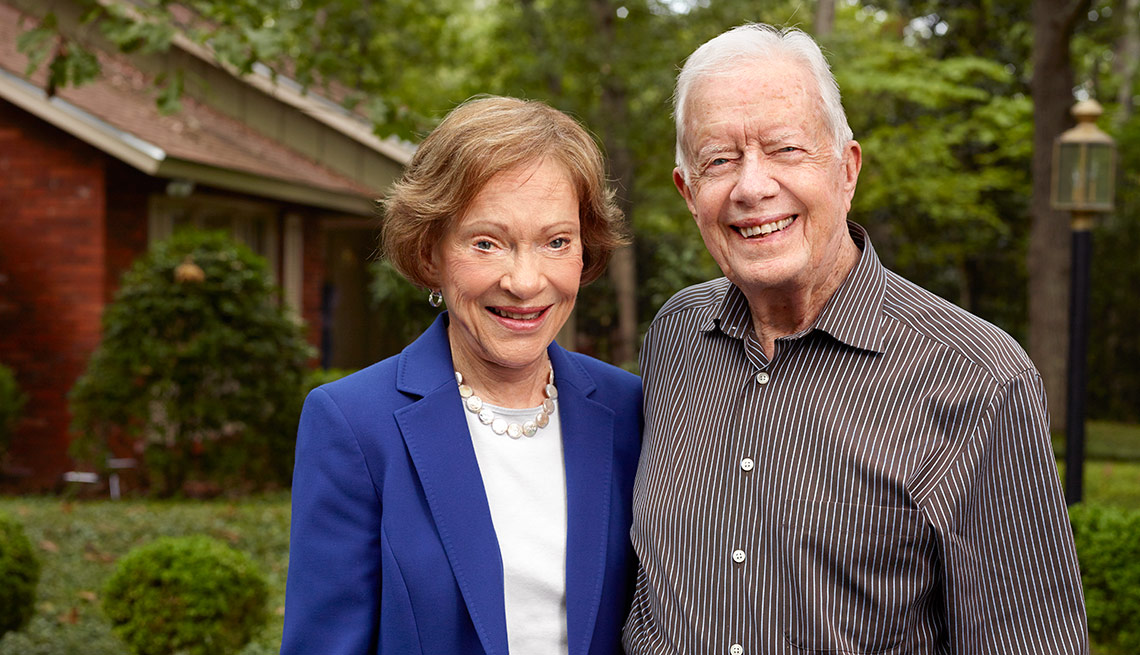 Portrait of Rosalynn and Jimmy Carter. Former President Carter is the author of the upcoming book A Full Life: Reflections at Ninety.

Last October, you joined George H.W. Bush in a very exclusive club: former U.S. presidents age 90-plus. How is 90 treating you?

Quite well. I've just gotten back from a long trip through the Arab countries. The Carter Center has programs in about 70 countries, and I try to stay up with those in Africa, Latin America and the Middle East.

Are there things you miss from when you were younger?

I used to be a long-distance runner. I don't run anymore since I got two new knees about three years ago. I still ride bicycles, still swim, I still walk a lot and I'm still an avid fisherman and outdoorsman. Basically my life is pretty much like it was 50 years ago.

The 2016 presidential campaign is gearing up. Given the role of money in politics, do you think you could have run for president today?

No. I don't think anybody now can hope to be the nominee of the Democratic or Republican Party if they can't raise like a quarter of a billion dollars. This massive infusion of money automatically polarizes our country. When hundreds of thousands of dollars are spent tearing down the reputation of an opponent in order to get elected, animosity and negativism carries on into Washington. There was harmony among congressmen when I was there, and I got just as much support from Republicans as I did from Democrats. I can't imagine myself as a successful candidate today.

Race relations have always been important to you. How would you assess them now?

The recent publicity about mistreatment of black people in the judicial and police realm has been a reminder that the dreams of the civil rights movement have not been realized. Many Americans still have racist tendencies or feelings of superiority to people of color.

You were technically proficient enough to serve as a naval officer on a submarine. Do you take technological advances in stride?

I've got an iPhone, I've got an iPad, I've got a computer. I have a massive email correspondence. We decided, maybe erroneously, not to become involved in Twitter or in Facebook.

As president, you made a point of treating the two ex-presidents at the time, Richard Nixon and Gerald Ford, with respect.

Have any of your successors shown you that kind of level of respect?

George H.W. Bush, along with his secretary of state, James Baker, did. But he's the only one, and I'm not derogating the others when I say that. Somebody who has been out of office for 35 years is much less helpful to an incumbent president than either Gerald Ford or Richard Nixon were to me, because they had only been out of office just a few months or years.

It's got to hurt, though, when you're not even asked to speak in person at the 2008 Democratic National Convention.

I was a little upset at the time, but now I've gotten over it.

You and Rosalynn have been married for 69 years. Early in your marriage, you made some pretty important decisions unilaterally.

Yes, I did. That's the way my father did and that's the way most of the men did, at least that lived around us. They made the major decisions, and their wives were free to run the household and take care of the children and buy groceries and stuff like that.

You're a little better about collaborating now than you used to be?

See Also: 10 Must-See Items at the Museum of African American History and Culture

You end your new book by saying you and Rosalynn look forward to the future but that you are "prepared for inevitable adversity when it comes." Can you elaborate?

I know that there's going to come a time in the near future when I can't be so vigorous and travel around the world and spend all night on airplanes and tromp into the deserts and jungles of Africa. But I have a lot stored up that I can do around Plains. So we're prepared for that — and we're obviously prepared, I'd say in a religious way and psychological way, for inevitable death.

Well, I haven't been very belligerent in my life, maybe because of that ancestral background. I've been primarily devoted to peacekeeping. I've stayed in a peaceful mood.

Charles Green, a former editor of National Journal, is a freelance writer.