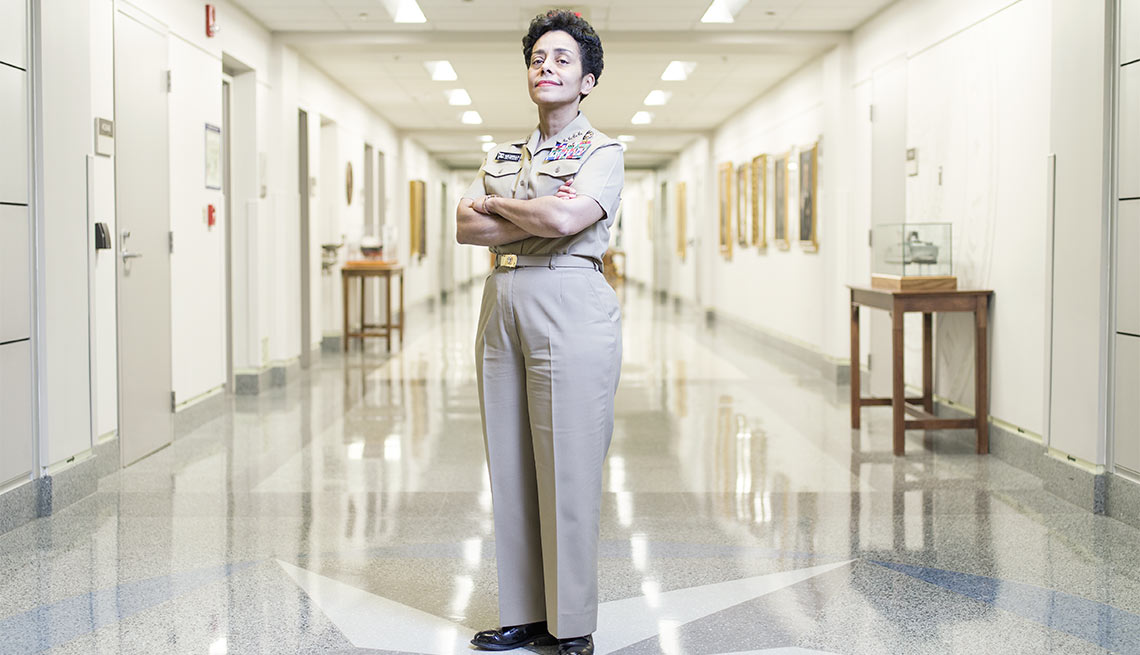 The U.S. Navy's first woman four-star admiral, 54, has a favorite saying: "The best ambassador is a warship." Behind the tough talk, Michelle Howard reveals how she felt about breaking barriers in the military, what being a role model means to her and why she became a Trekkie.

Q: Your father retired from the Air Force as a master sergeant. How did he react when you told him you were going into the Navy?

A: He definitely would have preferred I had gone into the Air Force. He didn't get over it until I graduated.

Q: What was it like to be a woman and African American at the U.S. Naval Academy in the late 1970s?

A: I don't know that those are divisible things or attributes. I was in the third class of women, so there were all the frictional points that come with change, both in the country and at the service academies. There were folks who didn't want us there and behaved that way.

Q: Are there any doors that women still need to break through in the military?

A: When the combat exclusion laws that focused on combat aviation and combatant ships were repealed in the early 1990s, the majority of what women did in our service opened up. But still closed are Special Forces. The last big barrier for the Navy was submarines, which opened up three years ago. Honestly, if someone had asked me as late as 2007 if I would still be around when submarines opened up, I would have said no.

Q: You were involved in the rescue of Capt. Richard Phillips, whose cargo ship was taken hostage by Somali pirates in 2009. And Tom Hanks starred in the movie.

A: Oh yes, and we even got tickets for the movie premiere. My husband goes, "Oh, look, free popcorn!"

Q: Tell me about your role in that mission.

A: I was embarked on the USS Boxer in the Gulf of Aden when Capt. Phillips was captured. I had been on the job a few days. As the task force commander, my role was to work through the mission development, synchronize all of these assets and information, and help come up with and develop a plan to rescue him.

Q: What was it like to have that type of assignment? I guess you just had to draw on all of your experience.

A: No, I started preparing for the job before I got out there. You don't wait until the day you show up to figure out how to do the job. I read everything I could [on piracy] and started talking to people. I spent a lot of time asking questions. I probably was as knowledgeable on piracy as anybody could be.

Q: What sacrifices did you have to make to get to where you are today?

A: In the end, for military people, it's the family that makes a lot of the sacrifices. They are intrinsic to military members' being successful.

Q: You've become a role model for many, especially women. Are you comfortable with that?

A: By the time I was lieutenant commander, I knew that that's the way it was going to be. Whether or not I was comfortable with it was not something I worried about.

Q: Whom do you admire and why?

A: My husband [retired Marine Wayne Cowles], for his persistence; and he's well-grounded. And then my mother [Phillipa] because she's where I get my warrior spirit. She's definitely a "live free or die" kind of personality.

Q: What women in history stand out for you?

A: Harriet Tubman. And Grace Hopper, a Navy rear admiral. We have a ship named after her. This is a woman who is probably the best-known computer scientist before we had the term "computer scientist."

Q: You have a very high-powered job. What do you do to have some fun?

A: I like to trout-fish. It's up there with walking and hiking. I also like reading history and murder mysteries. Maybe I like murder mysteries because in almost all of them, justice comes out in the end.

Q: I understand that you're a 'Star Trek' fan.

A: I am. Lt. Uhura, the communications officer, is a big favorite of mine. It was one of the shows my mother would let us stay up late and watch. There was nobody on television doing what Uhura did who looked like Uhura. And Uhura was a member of a team. She was Bluetoothing it before there was Bluetooth!