For paralyzed Vietnam veteran and antiwar activist Ron Kovic, 65, the premiere of the film Born on the Fourth of July 22 years ago today was the realization of a dream. But the movie, based on his searing memoir of the same name, almost didn't get made.

It was in 1977, he said in a telephone interview with the AARP Bulletin from his home in Redondo Beach, Calif., that he first met with a struggling screenwriter and Vietnam vet named Oliver Stone about turning his book into a movie. Al Pacino was set to play Kovic, but at the last minute financing fell apart. Stone promised Kovic that if he ever made it in Hollywood as a director, he would tell Kovic's story. 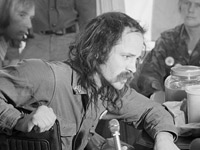 A look back at Ron Kovic on the anniversary of the 1989 film Born on the Fourth of July."

Stone kept his promise. In 1986, with the breakout success of Stone's Platoon, he was able to get backing and shoot the film, this time with Tom Cruise in the lead role.

Kovic and Stone went on to share a Golden Globe award for best screenplay. The film won several other Golden Globe and Academy awards.

Born on the 4th of July in 1946, Kovic grew up on Long Island, one of six children in a staunchly patriotic Catholic family. His parents met while serving in the Navy during World War II. He was an all-American boy, so proud of being born on his country's birthday, he said. A natural athlete, he idolized Mickey Mantle and dreamed of growing up to play for the New York Yankees. "We were always expecting to win all the time, just like America back then," Kovic said.

Inspired by John Wayne movies and two uncles who had been in the Marines, he enlisted right out of high school and later volunteered for a second tour. "I remember thinking how much I wanted to set my own example, like my father and the fathers of our neighborhood who had fought in World War II and won a great victory. And I was determined to go back to Vietnam."

But his life would be changed, "profoundly and forever," he wrote in his book, when he was wounded in Vietnam in January 1968. A bullet tore through his spinal cord, paralyzing him permanently from the chest down.

He was treated in the Bronx Veterans Hospital, where rats ran across the floors of the filthy wards and veterans were left unattended for hours because of staff shortages. In a 1970 cover story, "Our Forgotten Wounded," Life magazine described it as a "medical slum."

The "unspeakable" hospital conditions, he said, made him question for the first time why he had gone to Vietnam. "It truly made me wonder whether I and the others who had gone to that war had gone for nothing." 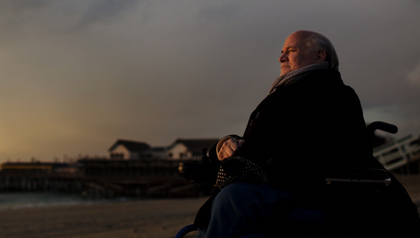 Ron Kovic continues to work as an antiwar spokesperson.

After leaving the hospital, Kovic attended Hofstra University on the GI Bill and began to read and listen to other points of view. His antiwar activism was inspired by the 1970 shootings at Kent State University, and he soon attended his first demonstration.

It was also at Hofstra that Kovic picked up a copy of All Quiet on the Western Front and thought, "I've got to write a book like this someday. I've got to tell my story."

By the time his book was published in 1976, Kovic was fully engaged in the antiwar movement, and he burst onto the national stage when he disrupted Richard Nixon's acceptance speech at the Republican National Convention in Miami in 1972.

That activism continues to this day. He's been arrested a dozen times over the years, but not recently. War is the "worst possible way" to solve problems, he said. "I'm tired of seeing our young men and women's lives wasted in senseless wars. It's about time that we respect these precious young men and women who are serving our country and to bring them home now and not squander their lives."

Energized by the Occupy Wall Street movement, he spoke to the Occupy group in Los Angeles several times.

In his apartment just blocks from the ocean, he spends time working on a sequel to Born on the Fourth of July. Never married, he enjoys going to the movies with his girlfriend of nearly five years. He also volunteers his time at the Long Beach veterans hospital, where he's helping to set up a peer program for wounded veterans.

The nightmares have all but disappeared for Kovic, but being in a wheelchair for nearly 44 years has meant dealing with increasing physical pain and difficulty sleeping. His sense of humor has sustained him, he said.