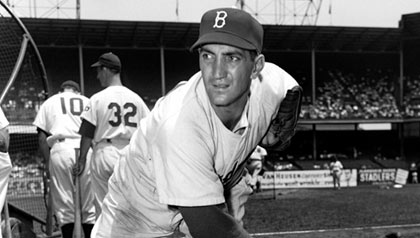 A distraught Ralph Branca sat disconsolately in front of his locker in the Polo Grounds. "Let me alone," the Brooklyn Dodgers pitcher moaned. "Let me alone. Let me be, will you? You saw what happened... All I could think was, 'Why me? Why me? Why did it have to be me?' "

It was Oct. 3, 1951, and minutes earlier Bobby Thomson of the New York Giants had hit what would become arguably baseball's most electrifying home run ever - the Shot Heard 'round the World, giving the Giants a 5-4 playoff victory and the National League pennant.

See also: So you think you know baseball?

What made the moment so historic wasn't just Thomson's home run. It was Russ Hodges' frenzied description of it. He was calling the game locally on WMCA-AM, the Giants radio station. Most of the nation didn't hear it at the time.

The Giants had overcome Brooklyn's 13 1/2-game lead, winning 37 of their final 44 games, and tied for the pennant. The teams split the first two games in the best-of-three playoff.

The Dodgers led the third game 4-1 in the bottom of the ninth, but a tiring Don Newcombe gave up singles to Alvin Dark and Don Mueller and, with one out, a run-scoring double to Whitey Lockman. Mueller tore tendons in his left ankle as he stepped awkwardly on third base. Clint Hartung pinch-ran for him.

Branca was warming up alongside Carl Erskine in the Brooklyn bullpen. When Erskine bounced a curveball just as manager Charlie Dressen called the bullpen, coach Clyde Sukeforth mentioned it and Dressen told him to send in Branca.

Branca's first pitch to Thomson was a fastball down the middle. Thomson watched it. "I was hoping he'd swing at it," Branca said. "He would have popped it up." His second pitch, also a fastball, was intended to set up a low-outside curveball.

Here's how Hodges called it:

In that mystical instant, Branca and Thomson became as one, fused forever in memory like Abbott and Costello, Burns and Allen. In a baseball sense they became immortal.

Branca grew up a Giants fan in Mount Vernon, just north of New York City. He pitched in high school and, thanks to a letter by an older sister to New York's three teams, was invited by each for a tryout. Only the Dodgers asked him back, to pitch batting practice in the summer of 1942 and again the following year.

In the summer of '43 he was summoned to meet with Dodgers president and general manager Branch Rickey and was told to bring a responsible adult with him. Branca brought his mother.

"Rickey offered me a contract for $90 a month to sign with Olean," Brooklyn's Class D team 80 miles south of Buffalo, N.Y. "I really wanted to play. I didn't care where, and the money didn't matter. I was 17. I told my mother, 'Sign it,' and Rickey said, 'You have an anxious boy,' and she signed it."

On June 12, 1944, he made his big-league debut in relief at the Polo Grounds. "In one year I went from rooting for the Giants to pitching against them," Branca said.

The 1947 season was his best - 21 wins and 36 starts, tied for second in the major leagues. It was Brooklyn's second-best story of the season - a distant second to Jackie Robinson shattering baseball's color line.

In July of '49 he was invited by a friend to double-date at a dinner-dance. He didn't have a date, but he knew Ann Mulvey. They had met in 1945 when he was 19 and she was 14 and with her parents, who owned 25 percent of the Dodgers, at spring training in upstate New York.

Four years later, they had become friends. She was a student at Marymount College, not far from Mount Vernon. He called and asked her to the dance.

"She was beautiful," he said. "She looked kind of like Katherine Hepburn, but she was prettier." When they weren't dining with the other couple or dancing, they talked baseball. Being around the game, she knew it well. Soon they were dating. He proposed before the 1951 season. They set a wedding date for just after the World Series.

Branca was waived by the Dodgers during the 1953 season, and Detroit claimed him. He retired from baseball after the 1956 season and went into the investment banking and life insurance business. Now 85, he still goes to his office in White Plains, six hours a day, four days a week.

He and Ann live at the nearby Westchester Country Club. They will celebrate their 60th anniversary Oct. 20. They have two daughters, "both housewives," he said, and three grandsons. Patti's husband, Bill Barnes, sells fire extinguishers, smoke detectors and the like. Mary's husband, Bobby Valentine, an ESPN baseball analyst, formerly managed the Texas Rangers and New York Mets.

Branca has written a book, A Moment in Time, out this month, about his life, the home run and the aftermath.

He said he learned in 1954 that the Giants had been using a telescope during the 1951 season in the center field stands to steal the signals of opposing teams, but said nothing. "I didn't want people to think I was a whiner. And Bobby was a good man who'd become a hero. I didn't want to destroy that." Josh Prager, a Wall Street Journal reporter, detailed the whole operation in a 2001 story.

Slowly, a friendship between the two players blossomed, starting in 1984 when they began doing two or three baseball card shows a year together. "We'd talk while we were waiting for people to show up," Branca said. "That's when we got to know each other."

Thomson, who died Aug. 16, 2010, at age 86, admitted he received stolen signs but denied knowing in advance the home-run pitch he hit. "We never talked about it," Branca said, "but I know he knew and I think he knew I knew."

Technology preserved the moment and propelled Branca's and Thomson's fame. It's was all due to a fan.

As Lawrence Goldberg, a Giants fan in Brooklyn, left for work that day, he asked his mother to record the ninth inning. It was the only recording of the radio coverage; WMCA hadn't bothered to tape it.

Goldberg loaned the recording to Hodges, who sent copies as Christmas gifts. The following spring, Chesterfield, the team's cigarette sponsor, borrowed it for a promotion and paid Goldberg $100 and access to its box seats. Only then did Hodges' home-run call become a part of baseball lore.

Would Branca have wanted immortality for a failed moment or would he have preferred to save the game and been just another forgettable name?

"No problem," he said. "Getting Thomson out and saving the game. Then I'd have been known as the guy who no-hit the Yankees in the '51 World Series."