We remember Don Larsen for just one moment ­ — throwing a third strike past Brooklyn Dodgers pinch hitter Dale Mitchell. It was his 97th and final pitch for the New York Yankees on Monday, Oct. 8, 1956, the culmination of the only perfect game in World Series history.

Twenty-seven batters up, 27 down. None reached base. There have been 18 perfect games in major league baseball since 1900, its modern era. Three had come before Larsen's, the last one in 1922, seven years before he was born.

The instant that home-plate umpire Babe Pinelli ended New York's 2-0 victory in Game 5 by punching the air with his right arm, Larsen trotted off the Yankee Stadium mound, not fully aware of what he had just accomplished.

"I knew I had the no-hitter going all the way. … I didn't know it was a perfect game until somebody told me in the clubhouse after the game," Larsen, now 81, told the AARP Bulletin in a telephone interview from his home in Hayden Lake, Idaho. "I didn't know what a perfect game was."

A few steps from the first base line, catcher Yogi Berra leaped onto him. The grainy black-and-white photograph of that moment is one of baseball's iconic images.

Pinelli's call was, and still is, hotly debated by Brooklyn's players and many Dodger fans who insisted the pitch was high and outside. So did some of the Yankees on the field that day, outfielder Mickey Mantle, third baseman Andy Carey and shortstop Gil McDougald among them.

The game was an extraordinary moment in Larsen's otherwise unremarkable 14 seasons. The right-handed pitcher's overall record: 81 wins, 91 losses. His nickname: Gooney Bird, given him by his Yankees teammates in recognition of his widely known rambunctiousness.

"Larsen was easily the greatest drinker I've known, and I've known some pretty good ones in my time," Mantle (a pretty good drinker in his own right) was quoted as saying in the book Perfect: Don Larsen's Miraculous World Series Game and the Men Who Made It Happen, by Lew Paper.

Larsen's only other contribution to Yankees lore was being traded to the Kansas City Athletics after the 1959 season. It brought Roger Maris to New York; in 1961 Maris would break Babe Ruth's record for most home runs in a season. 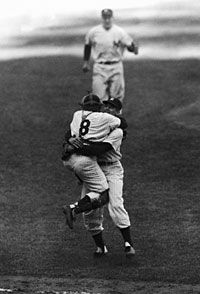 Larsen was born to James and Charlotte Larsen on Aug. 7, 1929, in Michigan City, Ind., and was 15 when the family moved to San Diego, where he starred at Point Loma High School.

After graduation in 1947, the St. Louis Browns offered him a $500 signing bonus and a $150-a-month contract to pitch for the Class C Aberdeen (S.D.) Pheasants. In 1953 he made his big-league debut with the Browns. The next year, the franchise moved to Baltimore.

With his no-windup delivery, Larsen started Game 2 of the 1956 World Series. Manager Casey Stengel pulled him out during Brooklyn's six-run rally in the second inning. Larsen thought he would spend the rest of the World Series in the bullpen — but before Game 5 he found a baseball tucked into a shoe in his locker. It was Stengel's way of letting him know he would be starting.

On the game's 50th anniversary, Berra said in an interview that he "knew pretty soon [Larsen] had his best stuff going for him. He went to three balls on just one hitter, Pee Wee Reese, in the first inning. After that he had great control. He never shook me off. He was throwing the pitches I called for, and he was getting them all in the right spot."

In the fourth inning, Mantle got the first of New York's five hits off Sal Maglie, a home run over Yankee Stadium's 45-inch fence, barely inside the right-field foul pole, just 296 feet from home plate. Hank Bauer's sixth-inning single scored the other run.

In the fifth, a sprinting Mantle made a backhanded catch of Gil Hodges' drive to left-center field. In the seventh, Duke Snider flied out to Mantle in "Death Valley," deep left-center field, where the distance to the fence was 457 feet.

By then, both teams were acutely aware of what was unfolding.

"I think it must have been the third or fourth inning, and somebody on our bench said, 'We haven't had a base runner yet,' " Brooklyn pitcher Carl Erskine told the AARP Bulletin from his home in Anderson, Ind. "It got pretty tense about the sixth, seventh, eighth inning."

In the Yankees' dugout, "they wouldn't talk to me," Larsen said. "They sort of avoided me. They were afraid to say anything. They probably believed in the jinx or something." When he mentioned the no-hitter to Mantle, "he just walked away from me."

In the clubhouse afterward, Stengel was asked if it was the best game he'd seen Larsen pitch. "So far," Casey deadpanned.

In his five seasons with New York, Larsen's record was 45-24; with six other teams, it was a combined 36-67. His career ended quietly. He spent all of 1966 and most of 1967 in the minor leagues before appearing in three Chicago Cubs games. The next year, Larsen was back in the minors. Then he was gone.

On Dec. 7, 1957, shortly after a first, brief marriage ended in divorce, Larsen married — and remains married to — the former Corrine Bruess, then a TWA flight attendant and registered nurse. They have one son and two grandsons.

In 1968, Larsen returned to San Diego but couldn't find work, so the family moved up the coast to San Jose, where he spent 25 years on the road making sales for Blake, Moffitt and Towne, a paper company, before retiring.

Seventeen years ago, Don and Corrine Larsen moved to Hayden Lake in the Idaho panhandle, where he spends his time fishing for bass, pike, trout and the occasional salmon.

As the most valuable player in the World Series, Larsen was awarded a Corvette by Sport magazine. He did a few endorsements, Camel cigarettes among them, appeared on Bob Hope's television program, and did the rounds of celebrity appearances and speeches for a couple of years.

"He does not like to speak, so he never really has done a great deal of public appearances," Corrine Larsen told the AARP Bulletin. "He's done more card shows now since he's been retired," and he attends some Yankee reunions.

Still, Larsen said he never tires of talking about that magical day: "Best thing ever happened to me."

"I think we both had good days, " Larsen said of Halladay. "He worked hard enough, and maybe sometimes you get a little lucky, too."

Larsen admitted, "I'm always happy when I'm watching a World Series when there's a walk or a base hit. I figure … I'm safe for another day." As for comparisons between Halladay's playoff game and his World Series performance, Larsen said: "Well, I think the World Series is number one."