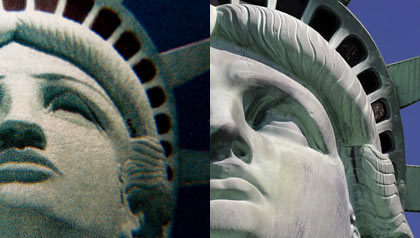 Side-by-side comparison of the Statue of Liberty postage stamp mistakenly based on the scaled-down replica at the New York, New York Hotel in Las Vegas and the real statue.

After 40 years at the U.S. Postal Service, the last 20 as head of stamp development, Terry McCaffrey has taken the credit or blame for the good, the great and the bungled. Until he retired at age 68 last December, he was responsible for the images on more than 2,500 American stamps. That number is more than half of all postage issued by the U.S. Postal Service since the very first stamp appeared in 1847. 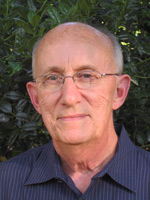 Now that McCaffrey is retired, he's hoping to write a memoir of his time in the Washington office, which includes the latest post office "blunder" discovered earlier this year — the Statue of Liberty stamp.

Q. How did the photo of a replica instead of the actual Statue of Liberty recently find its way onto the "forever" stamp?

A. We were always looking for something patriotic and I searched through stock agency files. We've done many Lady Liberty stamps but we'd never done a tight close-up of her face, which is harder to find. Eighteen months ago I picked out one that made a strong visual symbol and we developed it. The stock agency had simply labeled it "Statue of Liberty." When it was issued last December, it alternated in a coil with the American flag. It wasn't until March that some eagle-eyed collector caught the mistake: We'd printed the face of a figure that stood in front of a Las Vegas casino instead of the real thing. If we'd known it wasn't the New York statue, we'd have chosen another photo, but we felt it was still a good stamp image. There's a billion out there we'd have to pull back from America's 33,000 post offices.

Q. Weren't there some other stamp errors on your watch?

A. A few. For example, some years ago, we issued a series of Legends of the American West stamps. Among others, we featured a black cowboy, Bill Pickett. The research department had cleared his dossier and declared that he had no heirs. After 184 panes of Bill Pickett's image had been sold, over 200 heirs were discovered. One of them called immediately. "This is not Bill Pickett. The picture on your stamp is that of his brother!"

Next: How long does a stamp stay in circulation? >>

Q. Mistakes happen, but you've had many more hits than misses. Of which stamp are you most proud?

A. After 9/11 we issued a stamp featuring the American flag flying and the motto: United We Stand. It appeared just six weeks after the event, and it's been one of our most popular. It's sold two-and-a-half billion stamps.

Q. Will you follow up with a 10th anniversary stamp commemorating the fall of the twin towers?

A. No. The USPS doesn't print stamps that commemorate disasters. We want to pay tribute to positive things.

Q. Are there other restrictions?

American postage stamps don't honor living people — one must wait five years after death for that commendation. U.S. presidents are the exception; their images can follow their demise after a year. In fact, we plan ahead and are already working on Clinton, Bush, Carter, all waiting in the archives.

Q. How long does a stamp stay in circulation these days?

A. Generic stamps are ordinarily available for two to three years. Commemorative designs, like our Legends of Hollywood issue, a year or so.

Q. There was a rumor that you doctored an image of Bette Davis. Did you really remove the cigarette from her hand in her iconic photo?

A. Someone had already done away with the cigarette from the black-and-white photo we used as a reference for the portrait — we didn't.

Q. Who actually designs and creates our stamps?

A. Forty years ago most designs were done by the Bureau of Engraving and Printing. In the late '60s and early '70s we started using outside artists. Thousands of portfolios are submitted every year, and we look at every piece of art. Still, many professional designers have failed because it's difficult to work on a small palette and work very simply. Also, thousands of requests come from the public asking to put this or that on postage; they think it's a great piece of art and would make a great stamp. Well, not quite!

Next: Complaints about stamp design.

A. Oh, we get complaints! People will always find something they don't like. When we ran a picture of Mother Teresa, some wanted to know, "What happened to the separation of church and state?" Of course, we get fan letters, too.

Q. What was the most popular commemorative stamp ever issued in U.S. postage history?

A. Elvis Presley. His face sold over 500 million stamps.

Q. Did you personally choose Elvis as a subject?

A. There is a procedure that all designs go through. The Citizens' Stamp Advisory Committee is a group of prominent people from diverse backgrounds that include the arts, academia, politics. They meet every three months, divide into two groups, one to choose the subject, the other to confer on the illustrations. An average of 30,000 to 35,000 suggestions for subjects come from the public every year. I finalized the projects upon approval of the committee, and of course the postmaster general has final authority.

Q. You've seen many changes in the last 40 years at the post office. How is it doing these days?

A. Our volume has dropped dramatically — email, people paying their bills online plus the recession caused a lot of it — a double whammy. The post office is in financial trouble.

Q. Some stamp collectors have made a killing. Do you collect stamps?

A. It would have been a conflict of interest while I was working at the post office, so I never did, and still don't.