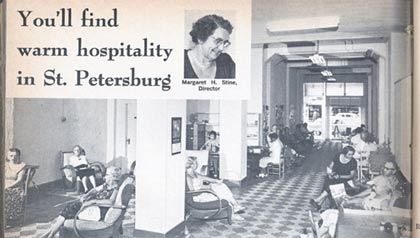 En español | From AARP's beginnings in the late 1950s to its ongoing Drive to End Hunger, Florida has loomed large in AARP's history.

AARP's founder, Ethel Percy Andrus, chartered the organization in Washington, D.C., on July 1, 1958. Within a few months, she opened a Hospitality Center in downtown St. Petersburg to assist Northern retirees seeking a warm, friendly place to spend the winter.

"She wanted a place where she knew a lot of people, particularly up north, would want to come," said Jeff Johnson, interim AARP Florida director. "It's a really cool part of the history."

The Hospitality Center played a key role in AARP's early growth. "In the first seven months of 1960, well over 3,000 men and women became AARP members at the Center," Modern Maturity reported in its August-September 1960 issue.

"They had roughly four to five pharmacists that worked the counter to the walk-in pharmacy, and then they had probably six to eight pharmacists that filled prescriptions for the mail-order pharmacy," said Lynn Magnusson, 47, AARP Florida senior operations administrator and former secretary to the pharmacy manager.

The Hospitality Center closed in the early 1970s, and the pharmacy closed in 1996, but their legacy lives on as a rich part of AARP's history in Florida.

Today's AARP Florida is still focused on services that benefit its nearly 2.7 million members, including job training and referral services to prospective employers. The AARP Foundation's WorkSearch program trains lower-income people and places them in nonprofit and government jobs to gain work skills they need to move into better-paying jobs in the private sector. Dave Bruns, AARP Florida communications manager, said the WorkSearch program's 74 percent placement rate in Florida last year was the best in the nation.

To promote awareness of hunger among older people, AARP and AARP Foundation last year launched the Drive to End Hunger with Hendrick Motorsports and driver Jeff Gordon. The goal of the multiyear effort is to attack the growing problem of hunger among older Americans. In Florida, 18 percent of the 7 million residents 60 and older are eligible for the Supplemental Nutrition Assistance Program (SNAP), formerly known as food stamps.

Gordon's No. 24 Drive to End Hunger car debuted at the Daytona 500 in February. "This is a truly unique opportunity to help people, and it's a completely new, cause-driven approach to sponsorship," Gordon said at a news conference last October launching the drive. "Every single day, millions of older Americans are forced to make a choice between food, medicine and utilities."

Daytona International Speedway donated leftover food from the event to the food bank. "Enough food for 8,000 meals was left over," Krepcho said. "If they didn't make that commitment, it would have gone into the Dumpster."