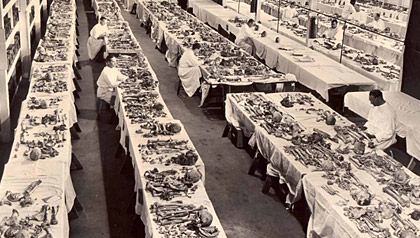 Scientists working in the Central Identification Laboratory at Schofield Barracks, Hawaii, in the 1940s attempt to identify the remains of servicemen killed during World War II.

When Bill Sopp received a call from someone claiming his second cousin had been tentatively identified among the remains of the men who went down with the USS Oklahoma at Pearl Harbor, he thought it was a scam. As far as he knew, he didn't have a cousin who died at Pearl Harbor.

But an investigator from the Pentagon was able to persuade him to give a sample of his DNA, and Machinist's Mate First Class Charles H. Swanson of Maywood, Calif., was identified nearly 69 years after he died. Sopp, 65, of Webster, N.Y., his brother, and their families buried their cousin with full military honors last July in Arlington National Cemetery.

"The effort and the testing that they went through to identify his body was phenomenal," Sopp, a Navy Vietnam veteran, said. "They only had five bones. It's really incredible they were able to identify him. But they better get it done pretty quick because a lot of us won't be around too much longer."

Even as DNA technology improves, making more identifications possible, investigators agree they are racing the clock as family memories fade and records are lost. Some 88,000 U.S. soldiers, sailors, airmen and Marines killed in combat during World War II, the Korean War and the Vietnam War remain unidentified, more than 70,000 of them from World War II alone. That includes all but a handful of the men who went down on the Oklahoma, even though their bodies were first recovered in the 1940s.

The men who were killed on the Oklahoma present two particularly difficult problems for the investigators.

The first is the condition of the remains.

"We're often dealing with things that were done 60 years ago because no one thought of DNA back then," said James Canik, deputy director of the Armed Forces DNA Identification Laboratory in Rockville, Md.

After the bodies of the 429 men of the Oklahoma were recovered between 1941 and 1943, efforts were made to identify them. Several years later, the Navy buried the remains of more than 390 men who couldn't be identified in 53 caskets in Oahu's National Memorial Cemetery of the Pacific, also known as the Punchbowl. One of the caskets was disinterred in 2003 after Ray Emory, an amateur historian and Pearl Harbor survivor, made a convincing argument that some of the remains in that casket could be traced.

When investigators opened it, they discovered the remains had been comingled — skeletons split up and buried in different caskets.

"In that one casket alone, there are the remains of at least 127 different individuals," Canik said. "We suspect all 53 [caskets] are probably in the same state."

The lab is working to identify other sets of comingled remains, including a group referred to as the Korea 208, remains that North Korea returned to the United States in the early 1990s. The lab has determined that instead of 208 individuals, the remains represent up to 400 men.

Despite these difficulties, the remains of 42 men have been identified and returned to their family members. 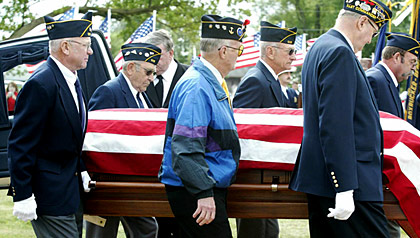 The remains of Lawrence A. Boxrucker, who died when the USS Oklahoma was sunk at Pearl Harbor in 1941, are buried in Dorchester, Wis., in 2008. Boxrucker was one of 42 men from the Oklahoma whose remains have recently been identified by the military using new DNA techniques.

The second problem the investigators face with the Oklahoma, and with so many of the service members who died in combat and were not identified, is the length of time that has passed.

The remains are so old that the type of DNA most commonly used in forensic identifications has broken down and can't be used. So investigators have to use mitochondrial DNA, which is not as precise in identifying individuals and is passed down through the maternal line — meaning only some relatives will have it.

As they puzzle through the problem of extracting DNA, the investigators have furthered the science, developing a protocol that allows the scientists to work with smaller samples while still leaving something to return to the family. The protocol is now used around the world, according to U.S. Army Lt. Col. Louis Finelli, the laboratory director.

The Pentagon has drawn fire from a group of family members of the men of the Oklahoma for not disinterring more of the caskets still buried in the Punchbowl. Bob Valley, of Escanaba, Mich., the brother of one of the men who died in the ship and remains unidentified, says he has evidence that four of the graves should probably contain 22 specific men. He said he and another researcher have tracked down family members of most of those men.

Canik said the lab would need at least 10 years, if it were able to work exclusively on the Oklahoma, to identify all the remains. And that's if they had DNA samples from family members for comparison.

"There may be somebody out there who lost a relative on the Oklahoma," Canik said. "We need them to get in touch with us."

The Pentagon has a team of 600 forensic anthropologists, logisticians, policy officers, DNA scientists, genealogists and equipment experts who work on hundreds of cold cases a year. In trying to track down family members, sometimes they go so far as to petition courts to briefly unseal adoption records.

"We had to explain to the court that if this person isn't located, this service member will never be identified," said Larry Greer, public affairs director of the Defense Prisoner of War/Missing Personnel Office.

Because of privacy issues, the Pentagon won't say whether that's what they did in the case of Swanson, who was the son of the biological sister of Sopp's maternal grandmother. Sopp's grandmother may have never known about her nephew. She was adopted as a child.

"They won't tell us how they did it, but I'm glad they did," said Sopp.

Susannah A. Nesmith is a freelance writer based in Miami.

﻿Once a month, 30 government specialists in DNA, genealogy and archaeology travel to a different city around the country to hold group and individual sessions with family members of unidentified soldiers, sailors, airmen and Marines killed in combat. The government sends invitations to the events to the families they know are interested, but investigators welcome any family members who think their relatives might be among the missing.

Larry Greer, public affairs director of the Defense Prisoner of War/Missing Personnel Office, urged anyone in that situation to contact his office.

"If you think we don't know where you are, contact us," he said. "Eventually, we may need to come back to you and say, 'We think we've found him. We need a DNA sample.' "

The labs are identifying about 100 people a year, with the goal of doubling that by 2015. The specialists come to each meeting prepared to take DNA samples and with individual files prepared for each of the families they know are coming. Greer said many families bring children, grandchildren, nieces and nephews of the service members.

"Frequently, it's the first time these young people have ever heard about the effort to find Uncle Joe or Granddad," Greer said.