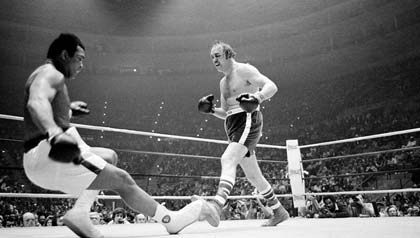 The butterfly Muhammad Ali goes down in the ninth round of the heavyweight title bout against challenger Chuck Wepner. In the 15th round, the bee Ali knocks out Wepner to retain his title.

It's called a "puncher's chance." A fighter with powerful fists, no matter how outclassed he might be against a faster boxer with more endurance, can always — with good luck and perfect timing — win by a knockout.

And in the ninth round on the evening of March 24, 1975, Chuck Wepner believed he was about to be crowned heavyweight champion of the world.

Wepner headed to his corner where Al Braverman, his manager, was waiting. "I said, 'Al, start the car. We're going to the bank. We're millionaires,' and Al said, 'You'd better turn around. Ali's getting up and he's really pissed off,' " Wepner told the AARP Bulletin.

Ali had bounced to his feet even before referee Tony Perez began a standing eight count. Late in the 15th round Ali unleashed a withering fusillade that staggered the exhausted, gelatin-legged challenger, finally battering him into the ropes and to the canvas.

Perez started the count over the dazed and bloodied Wepner, then waved an end to the fight 19 seconds before the final bell.

Sylvester Stallone, a relatively unknown actor, watched the fight on pay-per-view and was inspired to write a screenplay. Rocky, made for about $1.1 million, debuted Dec. 3, 1976. It grossed about $225 million worldwide, won the Academy Award for Best Picture, and spawned five sequels.

For years, Stallone referred to Wepner as the catalyst for his films and used his name to promote them. Wepner filed a $15 million federal lawsuit in 2003, alleging that Stallone had misappropriated his name. Three years later they settled out of court, the terms undisclosed.

The fight with Ali at the Richfield Coliseum near Cleveland, and Rocky, made Wepner an enduring celebrity. A film biography starring Liev Schreiber is in the works.

In his free time Wepner, 72, is a public speaker, mostly for charities. He and his younger brother, Don, a retired iron worker, were raised by their mother, Dee, in Bayonne, N.J., after their parents divorced. He still lives there with his third wife, Linda, whom he married in 1994. His three grown children from the previous marriages live in Bayonne as well. He and Linda also have a time share on Paradise Island in the Bahamas.

As a youngster, Chuck, whose father had been an average heavyweight, began boxing at Police Athletic League smokers. At 17 Wepner joined the Marines. He was chief of a crew that pulled pilots from planes that had crash-landed.

Next: Fighting in his spare time. >> 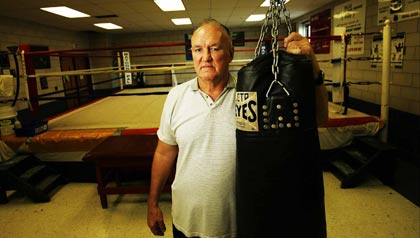 Sylvester Stallone's inspiration for Rocky, Chuck Wepner is one of the few fighters to knock down Ali.

He also made the boxing team, and was heavyweight champion of the Marine air base at Cherry Point, N.C. When he was discharged in 1959, he returned to Bayonne, where he already had a wife and two children.

Fighting in his spare time, Wepner was a security guard, then a bouncer, and for the past 41 years he's been a full-time salesman for Allied Liquor. In 1978, three years after fighting Ali, he retired with 35 wins (17 by knockout), 14 losses and two draws.

"Barney Felix, the referee, he wanted to stop it. He told me, 'Chuck, you're all busted up,' " Wepner said. "I said, 'Barney, let me finish the fight. I'm OK,' and he said, 'How many fingers do I have up?' I couldn't see, but Braverman had his hand on my shoulder and he tapped me three times. I said, 'Three,' and Barney said, 'OK, you can come out.' "

He didn't. The ring doctor stepped in, took one look and stopped the fight. Wepner wound up with broken ribs, a broken nose, eye socket and cheekbone, 72 stitches, and an enduring nickname.

Rosie Rosenberg, editor of the Jersey Journal daily newspaper, had been at ringside. "He had on this beige suit," Wepner said, "and every time Liston landed a punch, blood would splatter and it got all over his suit." Rosenberg's story the next day said Liston had beaten the Bayonne Bleeder.

Beginning the following year, 1971, Wepner was listed among the top 10 heavyweights for 42 straight months. He was ranked eighth when he fought Ali.

"Don King had sent me out to Salt Lake City to fight a guy named Terry Hinke," Wepner said. "If I beat him I was supposed to fight George Foreman."

Wepner stopped Hinke in the 11th round. Three weeks later, in the "Rumble in the Jungle" in Zaire, Ali rope-a-doped Foreman and won back the heavyweight crown.

"I figured my chance was over," Wepner said, "but Don King called me and said, 'I promised you a shot at the title. You're gonna be fighting Muhammad Ali.' He said he'd told Ali, 'Wepner'll be like a tune-up. He cuts easy.' "

Angelo Dundee, considered one of boxing's greatest trainers and Ali's perennial cornerman, said, "Nothing's a tune-up in boxing. Stories that King was looking for someone to prepare Muhammad for his next fight? Baloney. Chuck got the fight because he deserved it."

Allied Liquors gave Wepner seven weeks off. For the first time he could actually train full time for a fight. He received $100,000, far more than for any other fight. Ali got $1.5 million.

Whether Ali was knocked down in the ninth round — that's what Perez, the referee, ruled — is debatable. Ali claimed after the fight that he fell because Wepner was standing on his right foot when he was backing away. A photo of the moment appears to confirm it.

Wepner begs to differ. "In a fight, if somebody steps on your foot and knocks you down, you jump up and start screaming. Ali never did that. He took the eight count."

Still, he has a framed photo of a young Ali, sent to Wepner when he married Linda. Ali's inscription reads: "To Chuck and Linda: Good luck to my dear friends. Love, Muhammad Ali. After me, there will never be another. (Get off my foot)."

A few days before the bout, Wepner bought a powder-blue negligee for his then-second wife, Phyllis. "As I left the hotel the night of the fight I told her, 'I want you to wear this to bed because tonight you're going to be sleeping with the heavyweight champion of the world,' " Wepner said.

"After the fight I come back to the hotel and walk into the room and she's sitting on the edge of the bed, wearing the negligee, and she says, 'Am I going to Ali's room or is he coming to mine?' "