Of the six recipients of the 2011 BET Honors — premiering Feb. 21 on Black Entertainment Television — Lonnie G. Bunch III is the sole historian and the lesser known among fellow honorees like actress Cicely Tyson and musician Herbie Hancock. 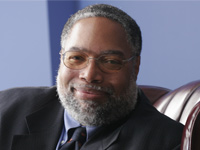 But as founding director of the Smithsonian's National Museum of African American History and Culture, the $500 million institution that opens on the National Mall in Washington in 2015, his job is just as high-profile, with an impact that is widespread and potentially longer lasting.

Bunch, 58, is the first to keep things in perspective.

"I'm flattered, I'm humbled, but this isn't about me," he says. "I'd much rather people talked about Frederick Douglass or Sojourner Truth than me."

An educator, author and self-professed "drum major for history," Bunch has spent much of his career at museums, the bulk of it at the Smithsonian. He started in 1978 as an education specialist at the National Air and Space Museum, where Apollo 11 astronaut Michael Collins, the museum's director, made an early impression.

"I was so moved by the way he talked not only about his life but the importance of aviation and space," Bunch says. "He took someone who was a 19th-century historian, who knew absolutely nothing [about aviation] and said, 'Come work for me.' "

From 1983 to 1989 Bunch was curator of history for the California Afro-American Museum in Los Angeles. From 1989 to 2000, he was back at the Smithsonian, holding various positions at the National Museum of American History. He was tapped to lead NMAAHC in 2005 while he was president of the Chicago Historical Society.

Bunch was happy in Chicago and had no plans to return to the Smithsonian for a third time. He initially rejected the job offer. But talk about making NMAAHC the best black museum in America changed his mind.

"This gives us an opportunity to go beyond just saying this is a story by blacks for blacks. What I want people to realize is that the African American story is their story, regardless of who they are," he says.

The National Museum of African American History and Culture was created by an act of Congress in 2003 to be the Smithsonian's 19th museum. It is the only national museum devoted exclusively to the documentation of African American life. When it opens near the Washington Monument not far from the White House, NMAAHC is expected to attract 5 million to 6 million visitors every year. The 313,000-square-foot museum sits on five acres and will be topped with a bronze corona that itself is a work of art.

Bunch tirelessly travels the country raising awareness of the museum, while also raising $250 million in public donations that will be matched by Congress.

"The fundraising is crucially important, but I also think the notion of crafting a vision that makes this a museum for the 21st century is really one of the bigger challenges. I think it's fair to say that over the next 12 to 18 months, we will meet all the numbers we need to," he says. 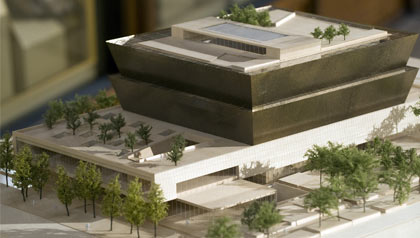 The winning architectual design of the National Museum of African American History and Culture. The architect firm Freelon Adjaye Bond/SmithGroup won the design.

The search for artifacts

Another challenge is building a collection of artifacts that will tell the story.

As a Smithsonian museum, NMAAHC has access to the institution's vast collection, which Bunch says would only be about 20 percent of what he needs. Curators started from scratch building the collection and have gathered 10,000 objects. The goal at opening is 30,000.

So far, they have amassed a rich collection of objects ranging from intimate and personal to monumental: Harriett Tubman's hymnal, military uniforms from early African Americans in the Navy, a Pullman porter's hat, artwork by Jacob Lawrence.

Some artifacts are controversial.

In 2009, the family of Emmett Till donated his original casket to the museum. Till, a 14-year-old black teenager from Chicago, was visiting relatives in Mississippi in 1955 when he was brutally murdered for allegedly whistling at a white woman. His mother, Mamie Till Mobley, who died in 2003, insisted that her son's casket be open during his memorial service so the world could see his mutilated body.

Till's body was reburied in a new casket in 2005. The original one was in ruin when it was discovered in 2009 during a scandal involving Oak Burr Cemetery in which corpses were unearthed and dumped allegedly by workers in order to resell burial plots.

Bunch, who befriended Mobley in Chicago, says Till's casket is as much the story as anything else.

"It's a way that the public can understand that change cannot come without loss," he says.

On Bunch's wish list: the set from Julia, the 1968 TV sitcom starring Diahann Carroll that was one of the first television shows to feature blacks in a professional setting; also a pair of shoes worn in the 1965 march in Selma, Ala. Topping the list: more Frederick Douglass material, who Bunch says doesn't get the public attention he deserves.

An offshoot of artifact collecting is artifact preservation. Save Our African American Treasures is NMAAHC's signature Antiques Roadshow-like program that encourages residents across the country to clean out their attics and closets and learn how to preserve items of cultural significance. NMAAHC partners with museums and libraries and works to keep most of the artifacts in local institutions.

That outreach strategy successfully serves all museums, not just NMAAHC.

"As our boat rises, so do all the other museums that care about African American culture," Bunch says. "If we do this museum right, we will create a place that will create a fuller, richer story and understanding of America."

Sharon Shahid is a writer in Maryland.