Claude Pepper is probably best known for championing the 1986 federal law that protects older Americans from being forced out of their jobs by mandatory retirement policies. But “Red” Pepper, as he was known in his younger days (for both his hair color and his fiery liberal rhetoric), accomplished a lot more — especially for older Americans — in his 60-year political career. 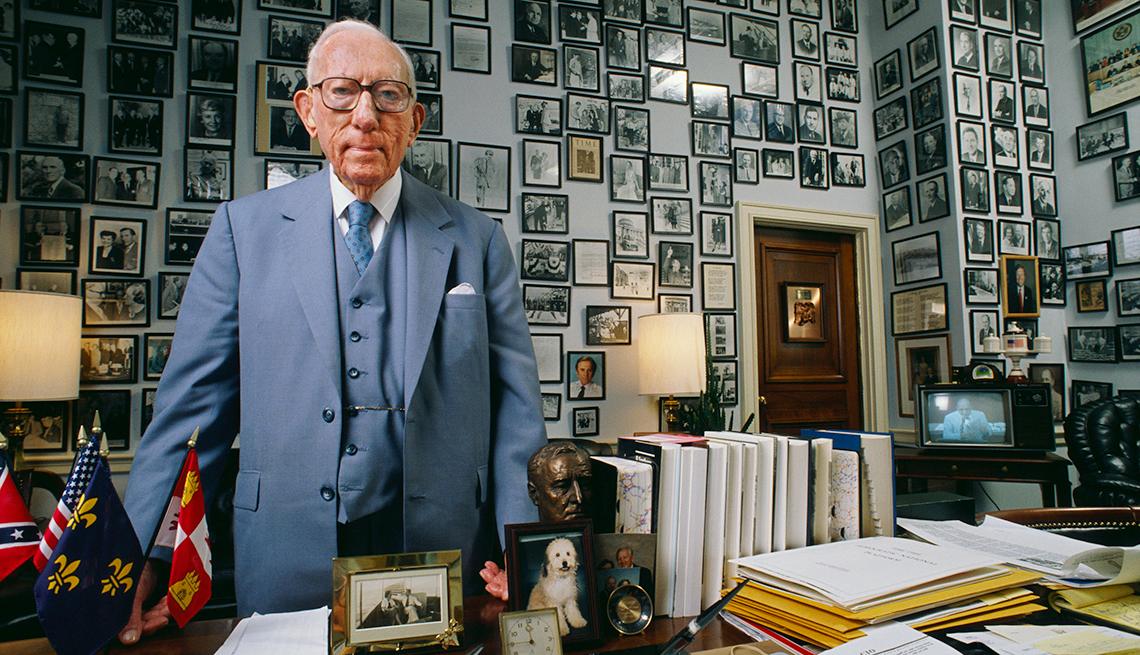 Florida Representative Claude Pepper in his Washington, D.C. office in June 1988.Mr. Senior Citizen’s concern for those in need may have grown out of his own early struggles.

Pepper was perhaps the first politician to grasp the potential political power of older Americans, and to marshal that clout to protect their interests.

The Florida Democrat, who chaired the U.S. House Select Committee on Aging from 1977 to 1984, earned the nickname “Mr. Senior Citizen” because of his fierce determination to protect programs for older Americans from cutbacks, and his unrelenting efforts to make sure that older people had affordable transportation as well as safe, crime-free places in which to live.

In 1987, when lawmakers from both parties met secretly to discuss postponing the annual cost-of-living increase in Social Security as a money-saving measure, Pepper found out and threatened to force a floor vote on the measure so that older Americans would know which lawmakers wanted to cut their benefits; the proposal was quickly dropped.

He introduced legislation to pay for improved security at housing projects for older people. And when he held hearings to expose snake-oil arthritis cures, the ensuing public pressure eventually forced the Food and Drug Administration to crack down on those peddling them.

Pepper’s concern for older people and others in need perhaps grew out of his own early struggles. Born in Alabama in 1900 to a family of sharecroppers, he dared to dream big: At age 10 he reportedly inscribed the prophetic graffiti “Claude Pepper, U.S. Senator” on a tree trunk. He had to work long hours as a boiler operator in a steel mill and a waiter to pay for his education at the University of Alabama, where he nevertheless earned Phi Beta Kappa honors. He also graduated from Harvard Law School, taught briefly and practiced law in a Florida lumber town before winning election to the state House of Representatives in 1929.

It was there that he sponsored his first legislation to help older people, a resolution that exempted Floridians 65 and older from having to buy fishing licenses. (When the Florida Fish and Wildlife Conservation Commission considered imposing a fee for licenses 76 years later, older people shouted down the proposal.) “My concern for the elderly preceded my joining their ranks,” Pepper once quipped.

Elected to the U.S. Senate in 1936, Pepper quickly emerged as an outspoken supporter of the New Deal liberalism of President Franklin D. Roosevelt. In 1950 he lost reelection, in part because a smear campaign depicted him as having Soviet sympathies. Opponents also capitalized on racial prejudices of the era by distributing a picture of Pepper with black actor and civil-rights activist Paul Robeson.

Humbled, Pepper moved back to Miami, practiced law and charted a political comeback. His resilience eventually paid off. After an unsuccessful Senate bid in 1958, he won election to the U.S. House of Representatives in 1962.

Pepper made his real mark during this second stint in Congress. But beyond his legislative achievements, Pepper — who called older people “one of the great treasures of the world” — provided an example of how an older person could remain vital and a force in society. As an octogenarian congressman with a pacemaker, trifocals and two hearing aids, he still worked long hours and remained influential, even feared, on Capitol Hill. And he still managed to find the energy for an occasional round of golf, switching to a lighter set of clubs to compensate for his age.

“That’s what you do in life,” he later explained. “When you come to a time when there’s a need for any sort of change, simply lighten your clubs and go right ahead.”