As a 1959 New York Times profile of AARP founder Ethel Percy Andrus noted, she had a favorite bit of advice to people who dreaded retirement: Don’t. Andrus practiced what she preached. 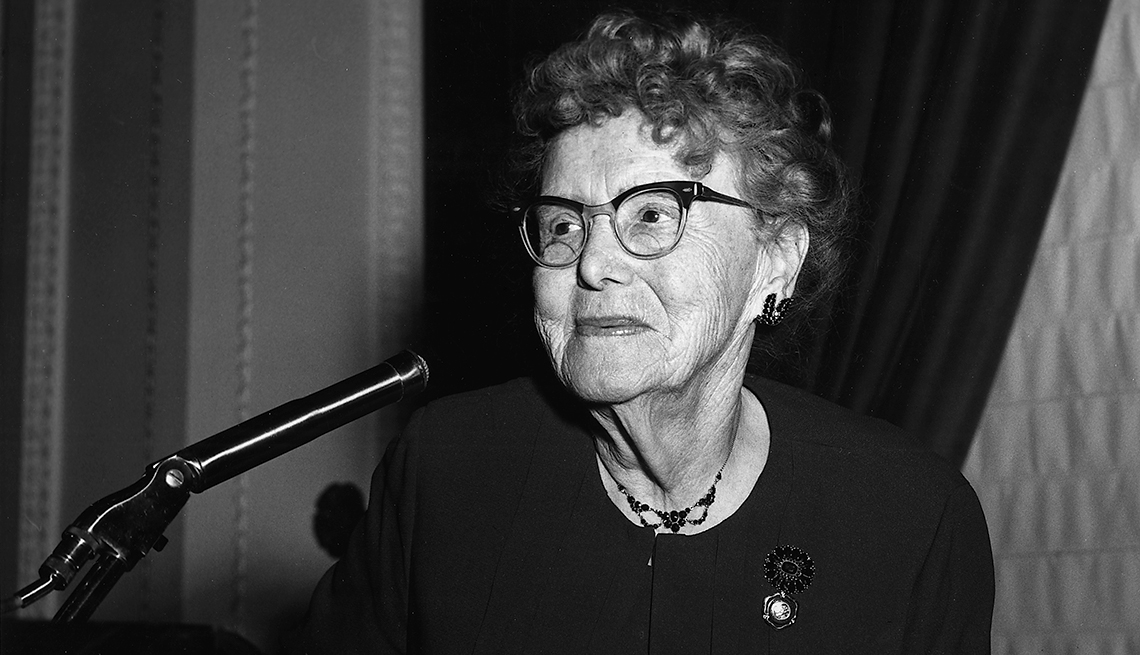 After retiring from her position as a Los Angeles high school principal in 1944, the award-winning educator began a second career that ultimately had a far bigger impact on society. She became an activist and organizer on behalf of other retirees and older Americans, fighting to improve their financial security, their health care and other services that they need.

Andrus was born in San Francisco but spent her early life in Chicago, where her father, George, moved the family while he studied law.  After earning an undergraduate degree in philosophy from the University of Chicago in 1903, Andrus began teaching. Her father, whom she once described as “a man who believed everyone should do good somewhere,” had instilled that credo in his daughter as well, and so the young woman ventured out of her upscale Chicago neighborhood in search of a suitable mission.

In those days, the city where Andrus lived was a prime destination for impoverished, uneducated immigrants from Eastern and Central Europe, who came in search of jobs in the city’s meatpacking plants, steel mills and railroads. These newcomers often were cruelly exploited, forced to work long hours for low wages and to live in crowded, unsanitary slums — a plight vividly depicted in Upton Sinclair’s 1906 novel, The Jungle.

In an effort to improve conditions for that underclass, progressive activists such as Jane Addams founded settlement houses, where immigrant families could obtain social services and education. The idealistic Andrus joined that movement, teaching school during the day and spending her evenings and weekends working at Addams’ famous Hull House and the Chicago Commons.

Andrus moved back to California with her family in 1910, where she taught at Santa Paula High School and the Manual Arts High School (her subjects included English and German).  In 1916, at age 32, she was appointed principal of Eastern High School (later renamed Abraham Lincoln High School), becoming California’s first-ever female high school principal.

At Lincoln, an inner-city school with a large, ethnically diverse student body, Andrus worked to raise academic standards, and started the Junior Coordinating Council, an outreach program that put students to work in the community, serving as volunteer nurses’ aides and running errands for older shut-ins. She even sometimes broke up street fights between boys, and regularly went to court to plead for a second chance for some.  “While there, I invited the policemen into the school to serve as big brothers,” she once told an interviewer. “And they did.”

The red-haired, bespectacled, soft-spoken Andrus was an iconoclast in an era of stern, authoritarian male principals. “She was the greatest principal, so nice and caring,” one of her former students told the Los Angeles Times in 2003. “She would talk to us about anything. No one was afraid to walk up to her and ask a question.”

Andrus also found time to worry about the plight of some of her retired faculty, who were penniless and struggling to make ends meet. In 1927, Andrus organized the Foundation to Assist California Teachers, and raised funds to start a retirement home in Inglewood and another in Pasadena.

In 1944, Andrus, who never married and was childless, retired so that she could care for her mother, who was in poor health. Despite her decades of service, Andrus was entitled to a pension of just $60 a month (the equivalent of $735.50 in 2010 dollars). She had enough money of her own to get by, but once again, she realized that many of her colleagues were not so fortunate. For Andrus, the galvanizing moment apparently came when she discovered a former colleague living in a chicken coop in a small town outside Los Angeles. Rather than merely bemoaning the injustice, she did something about it. She became active in the California Retired Teachers Association and in 1947 founded the National Retired Teachers Association (now part of AARP) to provide help to them.

But Andrus didn’t confine her efforts to health insurance and pensions. One of her first undertakings at AARP was to organize a dozen tours to Europe for older people, in which they could travel in small groups at a leisurely pace. Under her supervision, “Freedom Home” — a full-scale prototype house that adapted traditional architectural details to better meet the needs of older people — was built in Washington, D.C, for the 1961 White House Conference on Aging. And long before the term “ageism” was coined, she was among the first to argue that older workers should not be shunted aside or forced into retirement.

Just as important, Andrus sought to change Americans’ perception of aging. As she once explained, “Old age is not a defeat, but a victory, not a punishment, but a privilege.”

She urged retirees to be as active as possible — to pursue new passions, to travel and see the world, and, most of all, to continue to use the skills and experience developed over a lifetime to serve their communities.

She herself lived in Grey Gables, a retirement community for teachers in Ojai, Calif., that she financed with her own money. The 1959 New York Timesprofile of Andrus noted that residents “tutor children, work with the deaf, take up posts in the church or on the city planning board, and direct amateur shows.”

Andrus continued to work long hours and travel to promote AARP until her death from a heart attack at age 83 in 1967, the same year that membership in AARP reached 1 million. Nearly 1,000 of her former students gathered at Lincoln High to pay tribute to her. They included the actor Robert Preston, who pointed out the sign above the school’s gate, which was emblazoned with the word “Opportunity,” and remarked: “Isn’t it amazing that we didn’t know until we walked out [that] opportunity had red hair?”