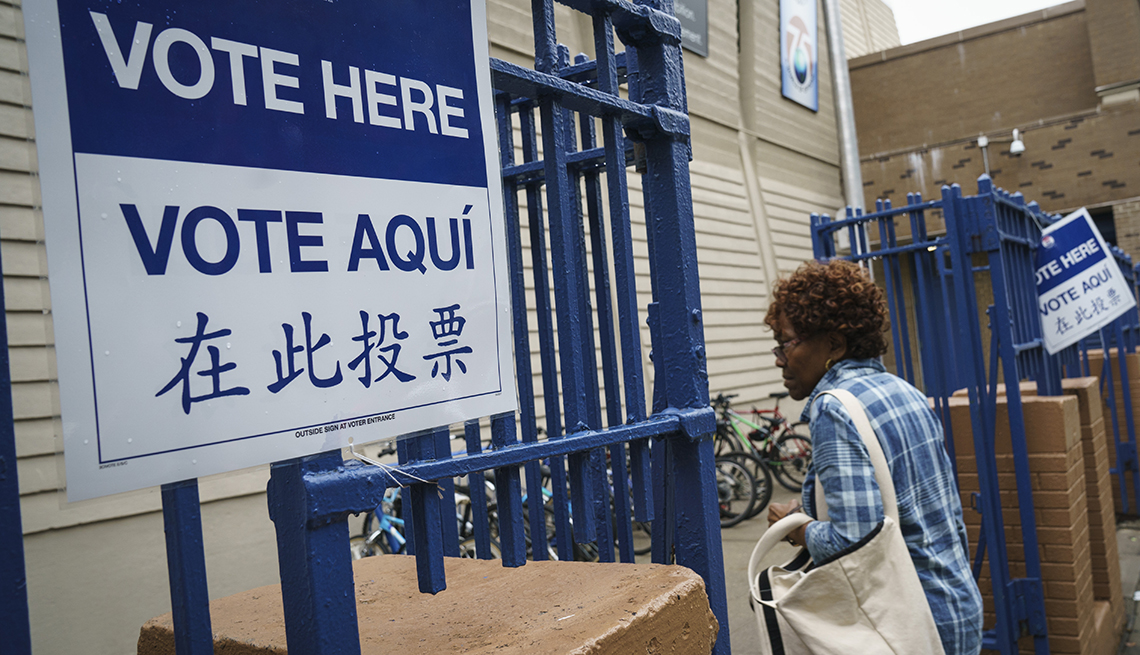 En español | It may seem like the 2020 election has been going on forever. But no one has actually yet cast a ballot for any potential candidate for president or any other elected office.

All that changes on Monday, Feb. 3, when Iowans will continue a nearly 40-year tradition of being the first citizens in the nation to declare their preferences in the presidential nominating process when they caucus. The four early primary and caucus states — Iowa, New Hampshire, Nevada and South Carolina — will all vote in February. And then on March 3 it's Super Tuesday, when Americans in 14 states will cast ballots for their presidential preferences.

On the Democratic side, polls show a competitive race among a number of hopefuls. The Democratic Party has scheduled four more debates in January and February, leading up to the first caucuses and primaries. The first debate of the year will be Tuesday night in Iowa, ahead of the state's caucuses. The three subsequent debates will be in New Hampshire, Nevada and South Carolina, ahead of each state's primary or caucuses.

Among Republicans, President Trump is assumed to be the party's nominee, and even though he has several challengers, the GOP in a number of states, including Alaska, Arizona, Hawaii, Kansas, Nevada, South Carolina and Virginia, have canceled the party's primaries and/or caucuses.

"If you had to win one age group, you would want to win those over 50 or over 60. They are probably the most important age group because they almost always vote."

— LARRY SABATO, founder and director of the University of Virginia’s Center for Politics

History has shown that voters over age 50 could well determine who will be on the ballot in November. “If you had to win one age group, you would want to win those over 50 or over 60,” says Larry Sabato, founder and director of the University of Virginia's Center for Politics. “They are probably the most important age group because they almost always vote.” An AARP national poll of voters over 50 released in December showed that 95 percent of women and 97 percent of men are likely to vote this fall.

Voters should remember that more than the presidency will be at stake when they go to the polls this year:

In some states, voters will be going to the nominating polls twice — once for a presidential primary and once to pick candidates for other federal and state offices. For example, in New York, voters will cast ballots in the Democratic primary April 28 but vote for down-ticket nominees June 23. And even though the Iowa caucuses are first when it comes to the presidential contest, the state will have a primary for all other offices June 2.

Here is a look at the primary contests throughout the United States. 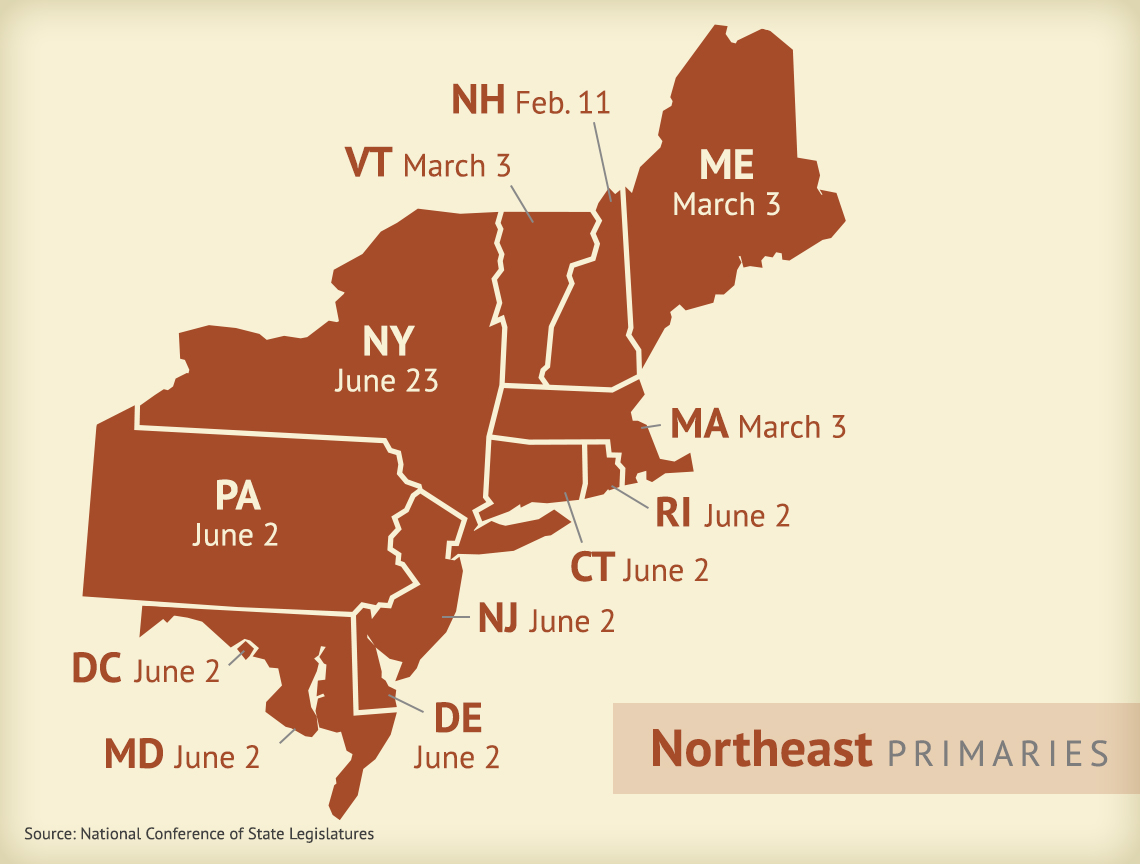 While all eyes will be on March 3's Super Tuesday, a group of states in this region could be decisive the next month in picking a presidential nominee. In what's called the Acela primary, after the high-speed Amtrak trains that run through these states, Connecticut, Delaware, Maryland, New York, Pennsylvania and Rhode Island will all have their presidential primaries April 28. 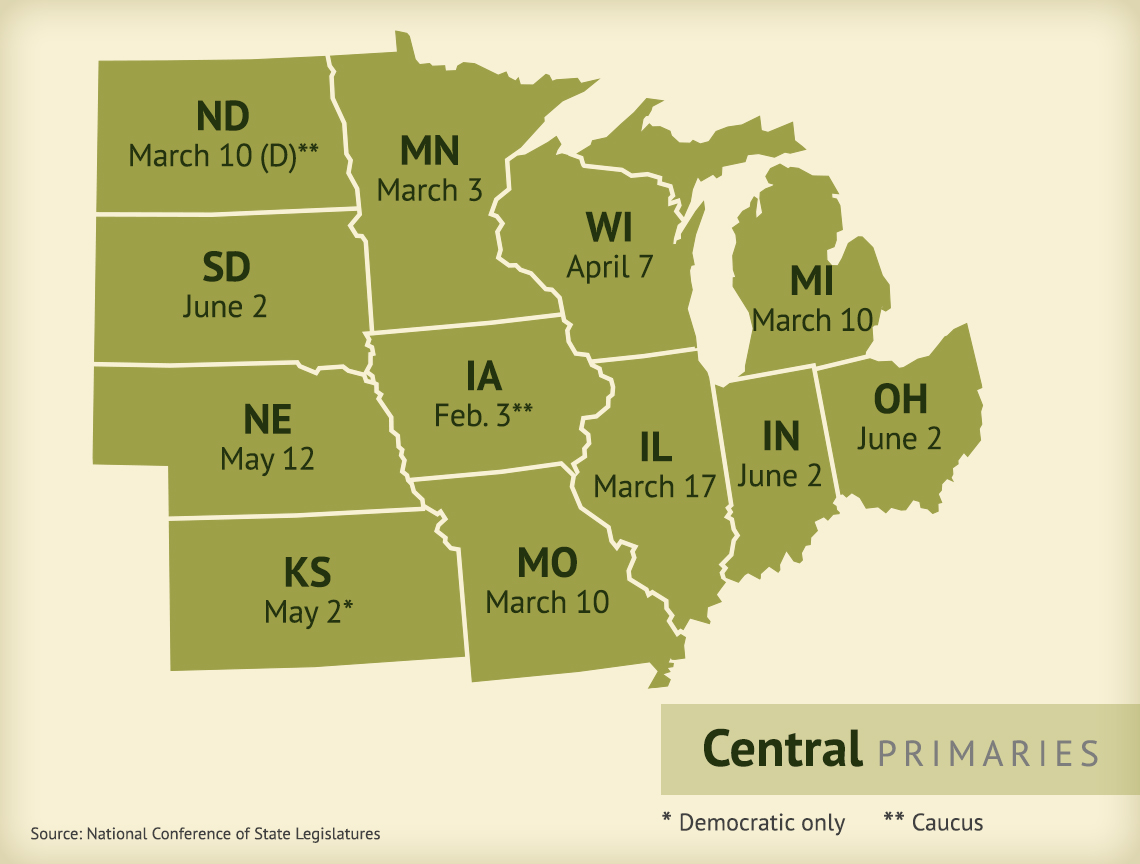 A couple of states in this region (North Dakota and Kansas) will have only Democratic primaries, and although some key battlegrounds are here — Michigan, Wisconsin, Minnesota and Ohio — only Minnesota will participate in Super Tuesday. Voters in a number of central states (Michigan, Missouri, Minnesota and North Dakota) should be prepared for two primaries: a presidential selection contest in March and primaries for statewide and local offices a few months later. 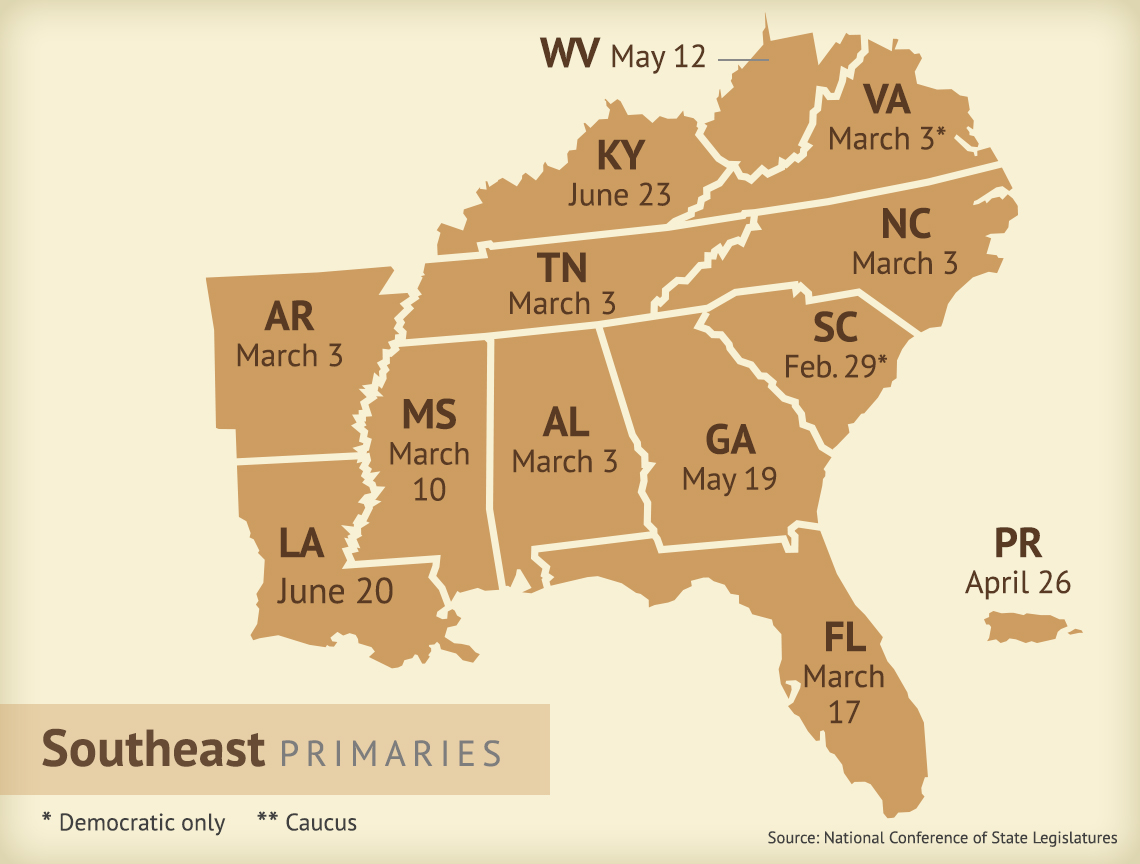 The road to a Democrat's victory in this region could well rest on the turnout and decisions by African Americans. According to a Pew Charitable Trusts Stateline analysis, African Americans are the fastest-growing group of voting-age residents in Alabama, Georgia, Louisiana and Mississippi. According to Pew, this region has seen a 14 percent increase in voting-age black residents, compared with 3 percent for whites. 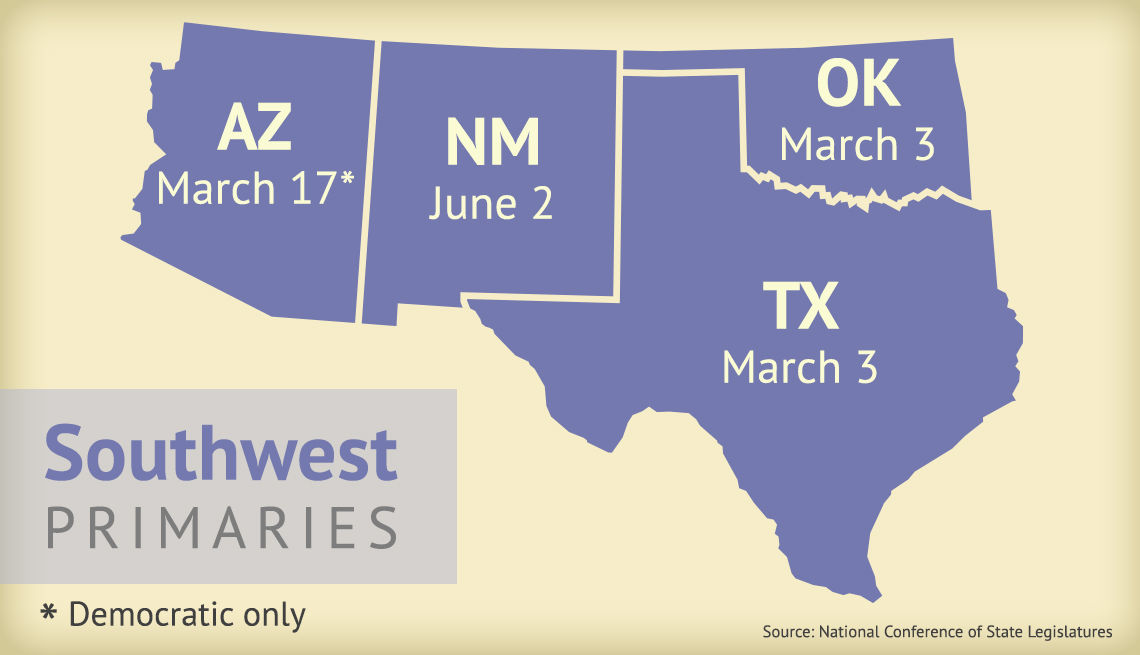 Three of these four states will be early deciders with their presidential primaries in March. Texas is one of 10 states that require a candidate to get 50 percent of the primary vote to win. If no one does, then the top two Texas vote-getters will face off in a May 26 runoff. Arizona is one of the states that will have its Democratic Party presidential preference election on one day (March 17) and its primary for all other offices on another (Aug. 4). 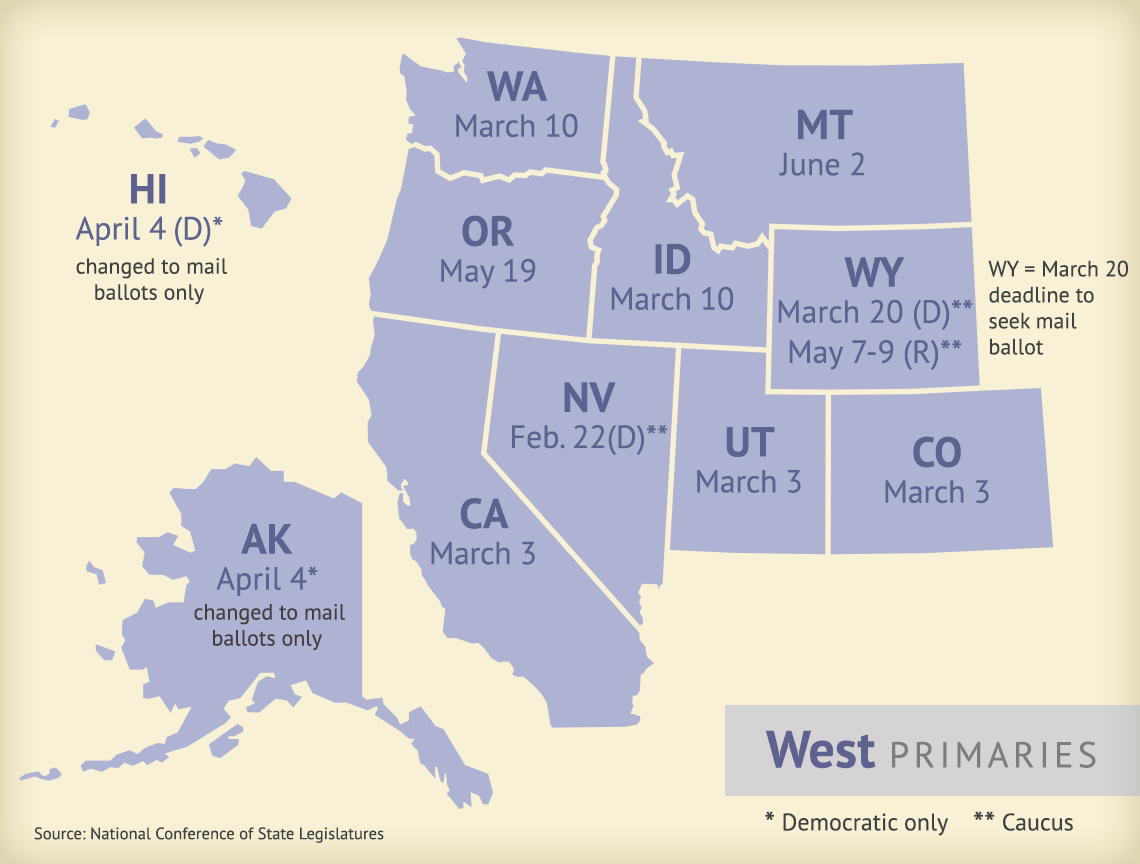 The big news in this region is California's participation in Super Tuesday. As the nation's most populous state, California's entry into that day's elections means that by mid-March, 60 percent of the delegates to the Democratic National Convention will have been selected. Two other states in this region (Colorado and Utah) also have Super Tuesday primaries, so it could be a late night for folks in the rest of the country watching to see who comes out ahead on that pivotal election day.

Presidential Primary and Caucus Dates in Every State