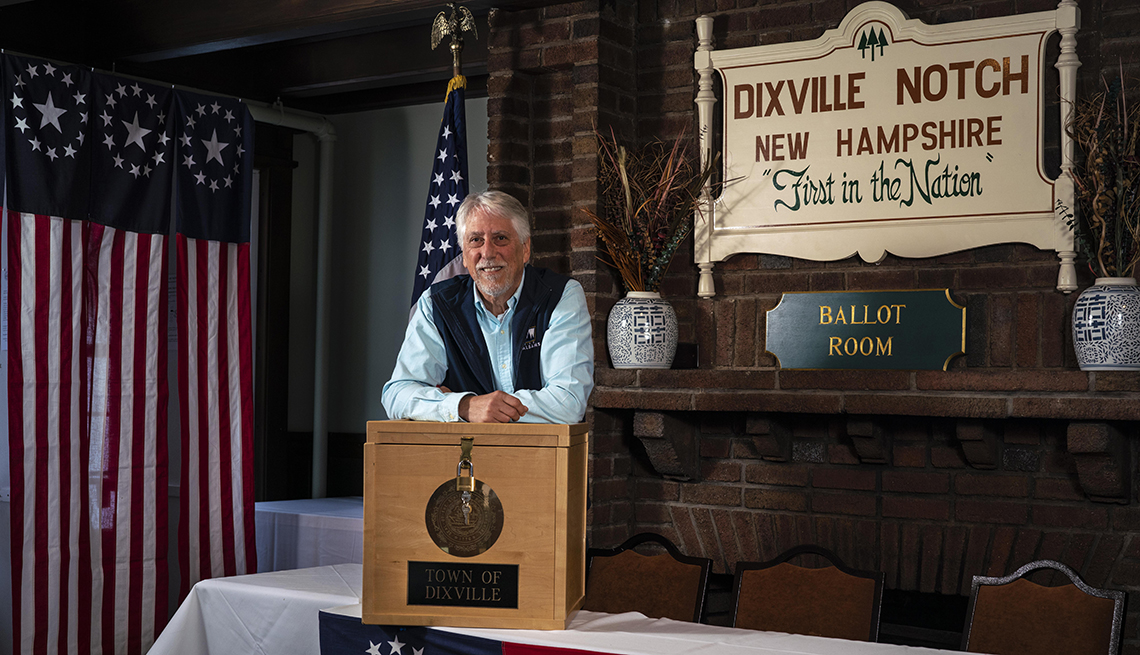 En español | It all started 60 years ago when Neil Tillotson decided he didn't want to drive 45 miles in the snow to cast a vote in New Hampshire's presidential primary. Determined to still do his civic duty, he went to the state legislature and got permission to create a polling place in Dixville Notch, where he lived and owned The Balsams ski and golf resort.

The story goes that a wire service reporter had told Tillotson that a couple of other small New Hampshire towns voted early at midnight. Intrigued by the idea of being among the first to cast a ballot, Tillotson decided to adopt the same practice. Six decades later, the Dixville Notch tradition remains alive today, carried on by his son.

"It's an honor and a privilege and a responsibility,” says Tom Tillotson, 75, who picked up the middle-of-the-night voting custom after his father, who operated a rubber factory and is credited with inventing the modern latex balloon, died in 2001 at the age of 102. “Voting to begin with is a privilege, which was the message we always hoped to send."

When the clock struck midnight and Monday turned into Tuesday, Feb. 11, five voters filed into the living room of The Balsams’ Beaver Lodge and put their paper votes into the same wooden box that Dixville Notch ballots have been placed in since 1960. Tom Tillotson was joined in the midnight voting ritual by his wife and son, as well as Les Otten, the new owner of the resort, and one of Otten's employees. Michael Bloomberg emerged as the winner. Three voters – two Democrats and the sole Republican – didn’t vote for any of the candidates on the primary ballots and instead wrote in the former New York City mayor’s name. Former South Bend, Ind. Mayor Pete Buttigieg and Vermont Sen. Bernie Sanders picked up the other two Democrats’ votes.

When Neil Tillotson was alive, he always cast the first vote, says his son, who didn't feel comfortable taking on that responsibility. Now, voters’ names are placed in a hat and they draw for who goes first.

"It's an honor and a privilege and a responsibility. Voting to begin with is a privilege, which was the message we always hoped to send."

Otten, 70, says the lodge, which is now his eight-bedroom home, will be transformed into a newsroom of sorts, with about 80 journalists there to record the first votes cast in New Hampshire's 2020 primary. “It's a great lesson in American democracy,” says Otten, who has been spending his time getting ready for the media onslaught, including making sure that the Wi-Fi in his house can handle the extra traffic Monday night.

The walls of the lodge's dining room are covered with photographs of the past presidential hopefuls who have come through, from Ronald Reagan to George Bush to Bill Clinton to John McCain.

As soon as the five Dixville Notch voters vote, the “poll” will quickly be closed and the scores of journalists in Otten's home will report the results. The midnight voting only works if everyone who is eligible to vote shows up. That's because under state election law, if even one eligible voter doesn't show up, The Balsams’ polling place must remain open until that voter votes or until 7 p.m. Tuesday, the statewide closing time.

That won't be an issue this year, when all five eligible voters will be in Otten's living room at the appointed time. But in years past, as many as 29 people were registered in Dixville Notch, and it wasn't unusual for election officials to fan out through the town to search out all the eligible voters and get them to the poll at midnight.

Dixville Notch isn't necessarily a bellwether when it comes to who will eventually get a party's nomination. In 2016, nine votes were cast: four for Sen. Bernie Sanders of nearby Vermont, who ran in the Democratic primary, three for former Republican Ohio Gov. John Kasich and two for eventual Republican nominee Donald Trump.

Dixville Notch also isn't New Hampshire's only midnight voting polling place. Millsfield, not far from Dixville Notch, and Hart's Location, about two hours to the southeast, both gather their voters at midnight to cast ballots. Hart's Location started the tradition in 1948 as a way to help railroad workers who had to be on the job before the polls opened. Tillotson says he doesn't consider it a competition — all three communities can claim the first-in-the-nation primary vote status.

"Here are these few towns that get up at midnight and 100 percent of the citizens vote,” he said. “If that encourages somebody else to get up at 9 a.m. and vote, it's a wonderful thing. It kind of begins the starting gun for the presidential election process."

Dixville Notch almost lost its place in voting history this year. Under New Hampshire law, five people must staff a polling place. Until last month, only four eligible voters lived there. That's when Otten stepped up and moved in. He was already in the process of trying to restore the resort, which closed in 2011. Dixville Notch is located just 20 miles from Canada and once provided a labor force for the paper and pulp industries. Those businesses have left, Otten said, but he is determined to bring The Balsams back to its former glory.

Otten is also determined to keep the midnight voting tradition alive — and see it grow. “I would like in 2024 for there to be at least 50 people voting,” he says, “and for us to be in an utter panic to make sure everybody shows up."

Editor’s note: This article has been updated to reflect the New Hampshire primary results.