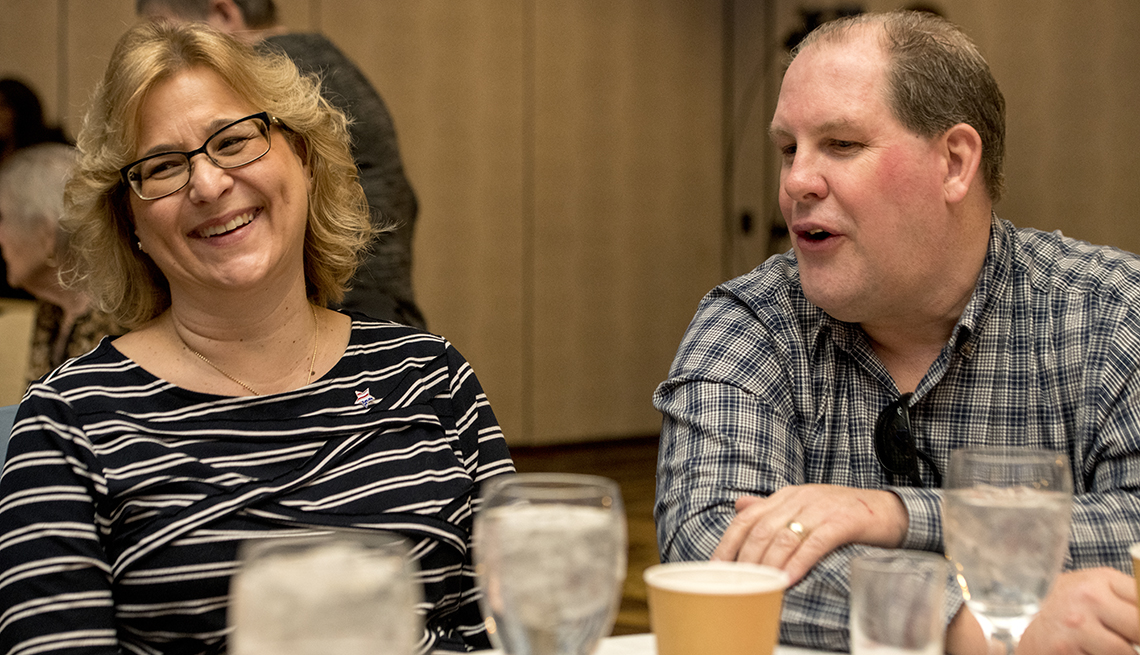 En español | When Bob Peters started his trade show business in 2001, his wife, Billie Jo, wanted to quit her job at a bank and join him in this new adventure. But he has diabetes, and no health insurer would cover his preexisting condition. So, she kept working to keep her husband on her insurance.

Then the Affordable Care Act (ACA) passed. “I was able to leave the bank to work with my husband and we were able to get covered,” says Billie Jo, now 54. She and Bob, 56, will be attending their first caucus on Saturday in Nevada and are looking for a candidate who can protect the ACA. “If they get rid of the Affordable Care Act, especially the preexisting condition parts, then we're back to where we were before,” she says.

In election poll after election poll, health care has been the top issue on voters’ minds — especially among older voters — and Nevada is no exception. This weekend, the Silver State will be the third to express its preferences for the 2020 Democratic nominee for president. It's also the most diverse state to participate in the process so far. According to U.S. Census data, Iowa and New Hampshire both are more than 90 percent white, while Nevada's population is nearly 30 percent Hispanic, 10 percent African American and nearly 10 percent Asian.

Nevada's Democratic Party made some changes to its process this year in an effort to broaden the reach of the caucus, particularly among minority citizens. Voters who can't or don't want to spend a good part of their Saturday caucusing were able to state their preferences during early caucuses that began Feb. 15 and continued through the President's Day weekend, ending on Feb. 18. In Las Vegas, early casino caucus sites were open late into the night to accommodate hotel employees, and there will be voting locations on the Strip on Caucus Day, Feb. 22. More than 70,000 Nevada Democrats went to an early caucus site over the four days — with long lines reported, according to the Las Vegas Review-Journal. In 2016, 84,000 voters caucused during Nevada's one-day event.

Vermont Sen. Bernie Sanders easily won Saturday’s caucus with former Vice President Joe Biden coming in second and former South Bend, Ind. Mayor Pete Buttigieg coming in third. Older voters clearly had a lot to say about the results, with 63 percent of those caucusing being age 45 or older, according to entrance polls reported by the Washington Post.

A new citizen ponders her decision

When Angelica Romero goes to her caucus site on Saturday, it will be the first time she'll be able to exercise her voting power. Romero, who came to the United States from Mexico 27 years ago, just became a U.S. citizen.

"Now I have a voice,” says Romero, 54, who is both excited and nervous about the decision she will soon make. Many issues are swirling around in her head. She's worried about the country's immigration policy, climate change and health care.

Romero has worked as a housekeeper for a casino on the Las Vegas Strip for the past 12 years, and those employees generally have good health coverage on the job. But she remembers when her two children, now in their 20s, were small and she worried about being able to pay for their health care. “Sometimes you have to decide between paying for food and going to the doctor” or paying for insurance, she says. “It's not fair.” She cares about the environment and would like to put solar panels on her house to help preserve the planet, but she can't “because they are too expensive." 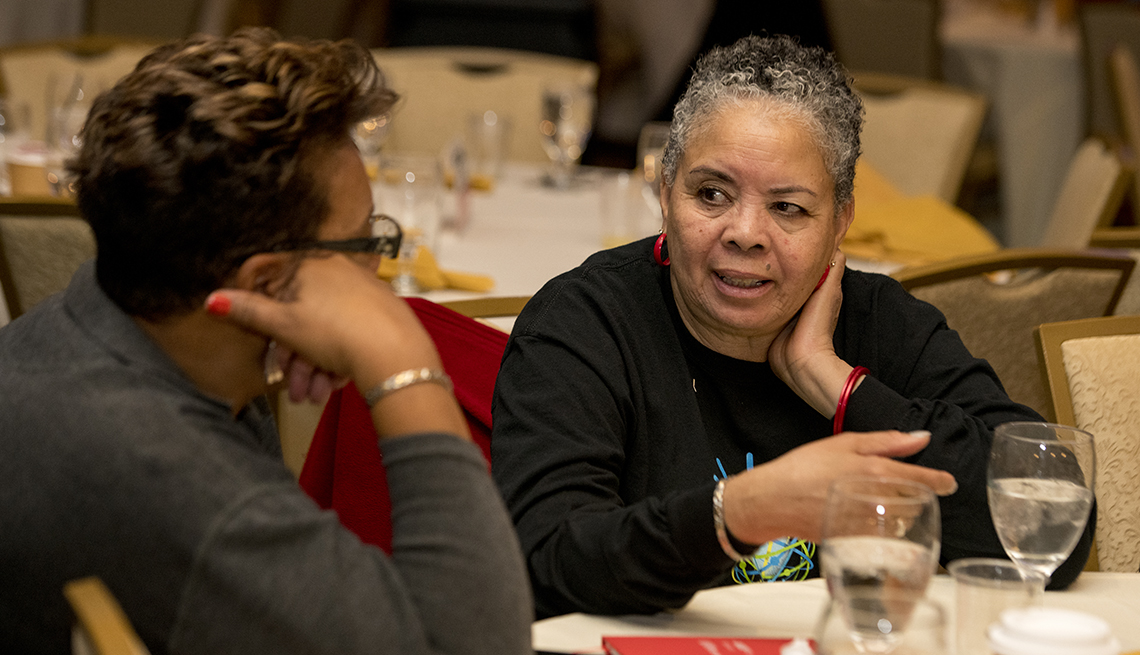 Above all, Romero is looking for a candidate she believes will respect the people he or she serves and who shares her values and principles. “If they promise something, they need to do it,” she says. As the caucus approaches, she feels a great weight on her shoulders. “Now that I can vote, I need to vote for me, for my family, for my community."

Romero's concern over a candidate's qualities are in keeping with recent AARP surveys of women voters 50-plus — both nationally and in the four early-voting states. In each poll, women voters ranked being trusted and ethical as the two top qualities they are looking for in their leaders.

Pat Sylvan, a native New Yorker and lifetime teacher, retired to Las Vegas. She says this election is especially important “because our democracy is seriously at stake.” Sylvan, 71, wants a leader she can trust to tell her the truth and is looking for someone who “can go into the White House on day one and know exactly what needs to be done."

Sylvan and the Peterses were among the Nevada voters who attended a recent event sponsored by AARP and the Review-Journal designed to energize voters to caucus and answer questions about the new process.

Doug Crawford attended the event in Las Vegas wearing a signature red AARP “Stop Rx Greed” T-shirt. For the past year, AARP has been waging this campaign to convince federal and state officials and lawmakers to do something about high prescription drug costs. With two weeks to go, Crawford was still making up his mind about the candidate he was going to caucus for and said his decision would come down to whom he believes can win in November. 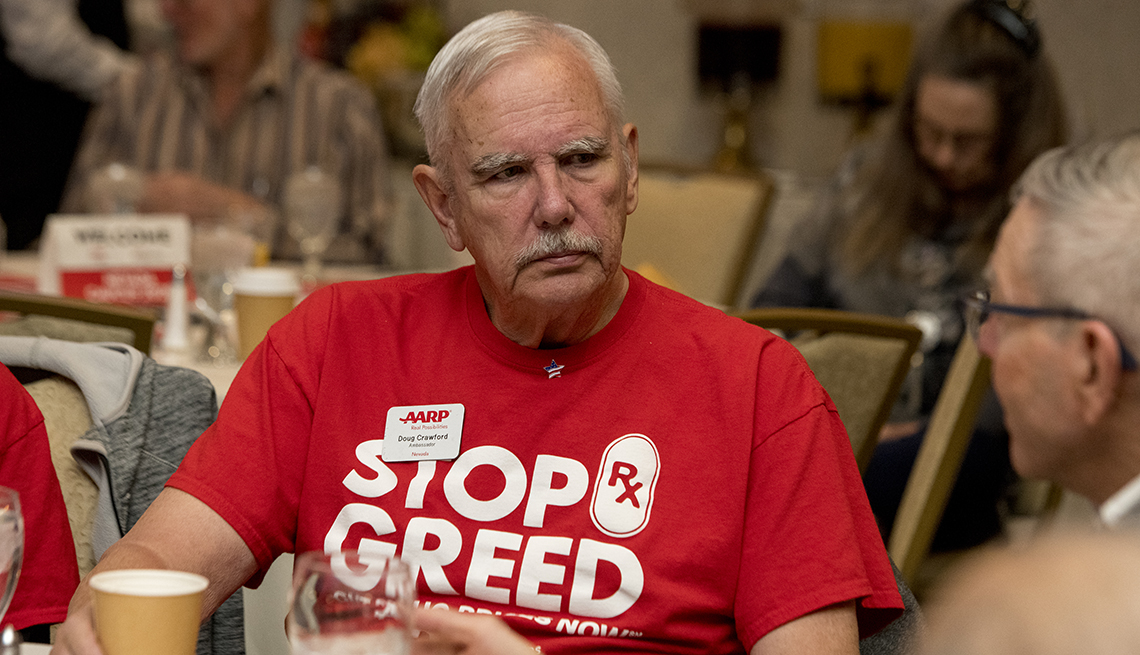 Crawford worries about assaults on safety net programs like Medicare and Medicaid that he said were a godsend when his father-in-law needed them after he developed Alzheimer's disease. “I've got my union insurance, so I'm taken care of,” says Crawford, 71, who retired to Henderson, a Las Vegas suburb, after a career as a U.S. Postal Service letter carrier in Toledo, Ohio. “But there are an awful lot of people who depend on Social Security and Medicare and couldn't afford to buy private insurance."

Crawford is particularly concerned about the runaway cost of prescription drugs and wants to see Medicare negotiate the price of medicines. That was also on Kathy Duncan's mind and was the topic of conversation at her AARP table.

"Every lady at this table was taking something,” says Duncan, 66, who says she's fortunate not to need expensive medications regularly. But it especially bothers her that people may not be able to take the drug that would be best for them because they cannot afford it.

"I think there should be some regulation on the drug companies,” says Duncan, who relocated to Las Vegas temporarily from Washington State to help with her new twin grandchildren. “I've always voted,” says Duncan, a retired substitute teacher, and she planned to go to one of the early caucus sites to make sure her voice is heard. “I figure as long as I'm here, I want to be part of the story."

Editor’s note: This article was updated with the Nevada caucus results.