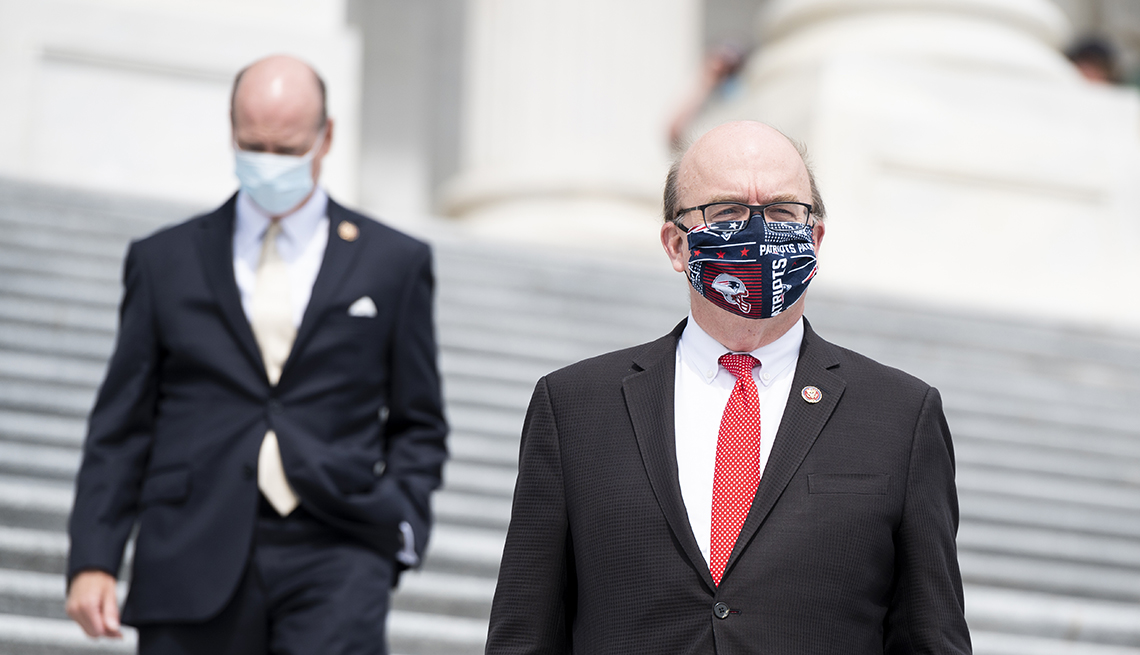 Members of the House of Representatives walk down the steps after voting on the rule for the Health and Economic Recovery Omnibus Emergency Solutions (HEROES) Act.

En español | With millions of American households struggling to stay afloat financially due to the pandemic, the U.S. House of Representatives passed a $3 trillion economic package Friday as lawmakers start to tackle what a new round of stimulus measures might include if enacted.

The 208-199 vote in the House on the Health and Economic Recovery Omnibus Emergency Solutions (HEROES) Act took place as federal lawmakers debate whether another round of stimulus legislation is necessary to spur the nation's economy. The bill should be seen as the House of Representatives’ opening bid in negotiations on the next round of legislation and almost certainly won't become law as is. Leaders in the Senate have said that the chamber will not vote on the bill and that they prefer to wait to see if previous rounds of stimulus measures are working. The White House has suggested it would veto the HEROES bill, though President Donald Trump has said his administration is exploring the possibility of additional stimulus payments to individuals.

Here's a look at some of the proposals the HEROES Act includes.

More than 36 million people have filed new claims for unemployment benefits in the eight weeks since the coronavirus pandemic caused widespread shutdowns of businesses. Under the CARES Act, people who lost their jobs during the pandemic are eligible to receive $600 per week from the federal government, on top of what they normally would receive in state unemployment benefits. That enhanced benefit is scheduled to end on July 30, 2020, but the HEROES bill would allow it to continue through January 2021. The CARES Act also made it possible for the first time for gig workers, freelancers, independent contractors and others to receive unemployment benefits through the end of this year. The HEROES legislation would extend their eligibility through March 2021.

More than 130 million Americans have already received the economic impact payments the CARES Act called for in March. If the HEROES Act were passed, a second round of stimulus payments would be distributed in a similar fashion, but with a few important changes. Individuals would once again be eligible for checks of up to $1,200 per person (or $2,400 for married couples filing taxes jointly). But under the HEROES Act guidelines for stimulus payments, dependents would be eligible for payments of $1,200 apiece. Under the first round of stimulus payments, children under 17 qualified for only $500 each. The new legislation also would make adult dependents eligible for payments of $1,200 apiece, which could make a big difference for caregivers of older adults and parents of college-age students. One household could only receive payments for three dependents.

The HEROES Act would provide $200 billion in funding for “pandemic premium pay” that employers could use to pay essential workers an additional $13 per hour for the time they have worked from Jan. 27, 2020, until 60 days after the last day of the COVID-19 public health emergency. Employers would have to apply for grants from the government to pass that pay premium on to their employees.

The HEROES Act would provide $500 million in funding so states could create “strike teams” that they could send to assist skilled nursing facilities where residents have been diagnosed with COVID-19.

According to the advocacy group Feeding America, food banks across the nation are seeing an average increase in demand of 60 percent as people who have lost their jobs look for ways to feed their families. The HEROES Act proposes a 15 percent increase to the maximum Supplemental Nutrition Assistance Program (SNAP) benefit that individual households could receive. The bill also would increase the minimum SNAP benefit to $30. (SNAP was previously known as the food stamp program.)

Money for state and local governments

The leaders of the bipartisan National Governors Association recently urged Congress to provide more money to states that have lost revenue due to temporary shutdowns at the same time they have seen the demands for many public services rise unexpectedly. The HEROES Act would provide nearly $1 trillion to state, local, territorial and tribal governments.

Public health officials have said that managing the outbreak will require performing more tests to determine who has been infected with the coronavirus, increasing efforts to identify and notify individuals who have come in contact with someone who has the coronavirus, and producing new treatments for people who have COVID-19. The HEROES Act would provide an additional $75 billion for such efforts.