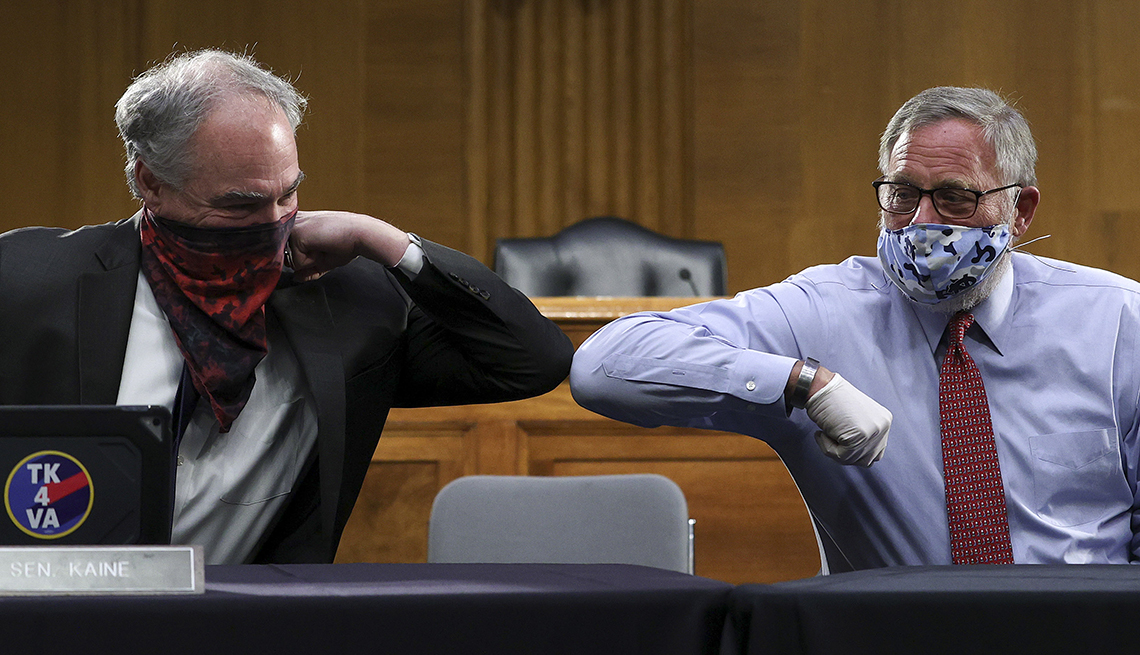 Senator Tim Kaine (D-Va.), left, and Senator Richard Burr (R-N.C.) greet each other with an elbow bump while wearing protective masks during a hearing in Washington, D.C.

"My concern is that if states or cities or regions, in their attempt to get back to some form of normalcy, disregard the checkpoints that we put in our guidelines, there is a real risk that you will trigger an outbreak that you will not be able to control,” Fauci told members of the Senate Health, Education, Labor and Pensions (HELP) committee.

Fauci, director of the National Institute of Allergy and Infectious Diseases, said a premature reopening of businesses would “not only set you back, not only leading to some suffering and death that could be avoided, but could even set you back on the road to economic recovery.”

The White House issued reopening guidelines in April that, in part, called for states to begin phased reopening after the number of documented new COVID-19 cases or positive tests dropped for 14 days.

Both Fauci and Robert Redfield, director of the Centers for Disease Control and Prevention (CDC), said that the virus is not yet under total control. “It's important to emphasize that we're not out of the woods yet,” Redfield said. “We need to stay vigilant with social distancing. It remains an imperative."

The HELP committee coronavirus hearing was the second in the past week. All four government witnesses testified remotely, and Sen. Lamar Alexander (R-Tenn.) chaired the session from his home state. Most of the senators in the Capitol Hill hearing room were wearing masks.

The hearing covered a wide range of issues — from the promise, timing and eventual access to a vaccine to how to better manage the pandemic in the nation's nursing homes.

Fauci also told the panel that he and most of his fellow scientists think the death toll from the coronavirus is higher than the current 80,000 reported, particularly because the challenges of New York's health care system in the early days of the pandemic probably led to people dying at home and not being counted as COVID-19-related deaths. Fauci did not say how many more people he thinks may have died from the illness so far.

Sen. Mitt Romney (R-Utah) asked whether Fauci thinks the development of a vaccine will be a “long shot.” No, Fauci said. “It is more likely than not that we will get a vaccine.” Fauci also said that the National Institutes of Health (NIH) will begin putting “hundreds of millions of dollars of federal government money” into producing promising vaccines even before they have completed the trials to determine whether they work. That way, he said, “we will have doses available to everyone who needs it in the United States."

Stephen Hahn, commissioner of the Food and Drug Administration (FDA), told senators that several administration agencies are working on a program called Operation Warp Speed to solve supply chain issues and speed production and distribution of a vaccine to the American public once one is ready.

Sen. Bernie Sanders (I-Vt.) pushed the government witnesses on when such a vaccine would be available free to all people regardless of income. Hahn committed to including all populations, including the most vulnerable and children, in vaccine trials, but said the FDA has no control over who receives the vaccine. Brett Giroir, assistant secretary of health at the Department of Health and Human Services, told Sanders he did not have the power to make any guarantees but said: “I will certainly advocate that everyone is able to receive the vaccine regardless of income."

Several senators noted that more than a third of deaths from the coronavirus have occurred in the nation's nursing homes and asked what more can be done to keep the residents and workers in those facilities safe.

"You've highlighted one of the great tragedies that we've all experienced together,” Redfield told Sen. Robert Casey (D-Pa.) when Casey asked why there has been a three-month delay in telling families of nursing home patients and the public about COVID-19 cases in those facilities.

Redfield pointed to the recent announcement by the Centers for Medicare and Medicaid Services that nursing homes must inform residents, their families and the CDC about coronavirus cases. Redfield also said the CDC is developing a national surveillance system to track the infection in nursing homes and other critical areas. Such cases are expected to be made public by the end of May.

Sen. Maggie Hassen (D-N.H.) asked Fauci whether he thinks residents and staff in nursing homes should have the same system of testing and masks in place as is now required in the White House. All West Wing staff members and visitors are supposed to wear masks, and there is daily testing for those coming in contact with President Trump and Vice President Pence.

Fauci said that nursing homes “need to be monitored very carefully,” and that while he didn't think daily testing would be feasible, “something that is much more aggressive than has been done in the past, I believe, should be done.” Long term, he said, “we will have to have infection control capabilities in nursing homes that are really pristine."