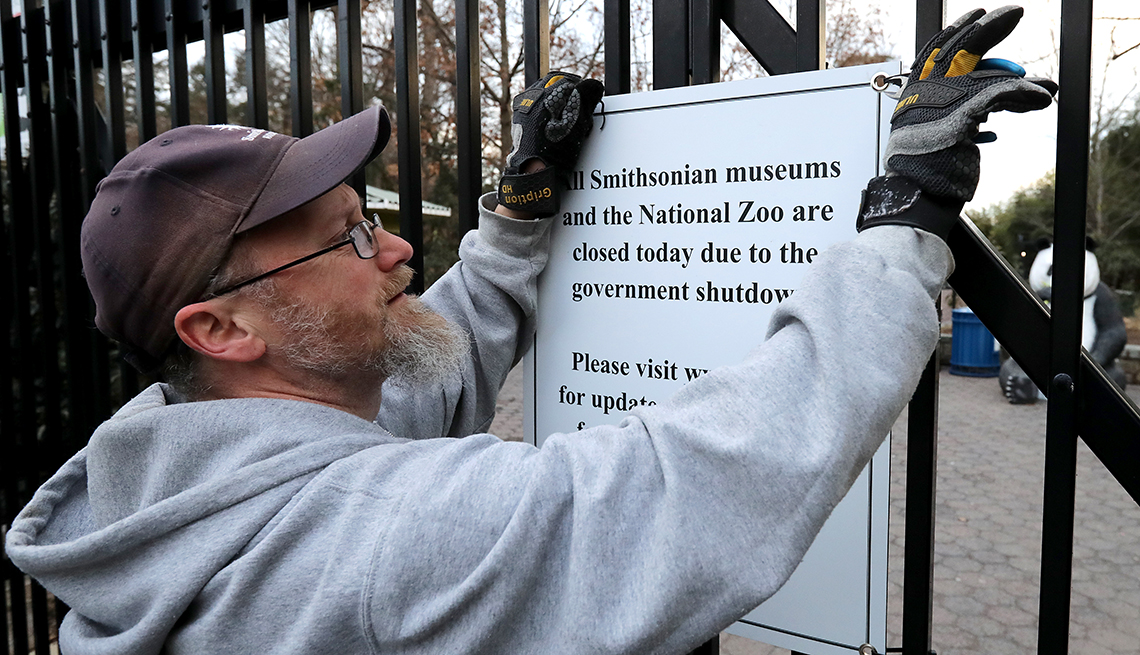 A worker at the Smithsonian National Zoo in Washington, D.C., removes a sign telling visitors the zoo is closed.

Federal departments Monday began recovering from the longest shutdown in history, but it will take time for normal operations to resume. And the possibility of another interruption looms because the spending bill the president signed late last week only includes enough funds to keep operations going until Feb. 15.

The 800,000 federal employees who were furloughed or worked without pay for the past 35 days are back and beginning to deal with work that piled up over the past five weeks. Federal officials say they expect that the employees who did not get paid during the shutdown will receive their back pay by the end of this week. But Congress must pass, and the president must sign, another spending bill by mid-February or risk another partial government shutdown.

On the National Park Service website, visitors are advised to contact the individual park they want to visit before planning an immediate trip. “Some parks which have been closed throughout the lapse in appropriations may not reopen immediately,” the website message says. During the partial shutdown garbage piled up at parks across the country, and park workers also will have to plow miles of roadways that have piled up with snow.

In Washington, D.C., Smithsonian Institution museums on the National Mall and the National Zoo are planning to open on Tuesday.

Monday, Jan. 28, is tax day, when the Internal Revenue Service (IRS) officially begins accepting tax returns. Even though all IRS employees are expected back at work, these workers will face a backlog on everything from audits that were halted during the shutdown to the complexities of implementing provisions of the new tax law. “Although we face various near- and longer-term challenges, our employees are committed to doing everything we can to help taxpayers and get refunds out quickly," IRS Commissioner Chuck Rettig said in a statement. Rettig says he expects the first refunds to go out in the first week of February and many refunds to be paid by mid- to late-February, as in previous years. Taxpayers can check Where's My Refund on the IRS site to get the status of their refunds. Call demand on IRS phones during the early weeks of the tax season is traditionally heavy, so taxpayers are encouraged to use IRS.gov to find answers before they call.