En español | A congressional panel, or "supercommittee," given special powers to reduce the nation's deficit conceded Monday that even those powers aren't enough to get past a fundamental political divide over whether to raise taxes and change spending programs like Social Security and Medicare. 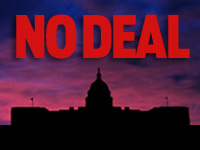 Congress will likely wait until after the 2012 presidential election to settle deficit dispute.

The Joint Select Committee on Deficit Reduction was charged with cutting at least $1.2 trillion from the deficit over the next 10 years. With no agreement on how to do that, some automatic actions will be triggered to reach the $1.2 trillion target: Defense spending will be pared almost $500 billion; an additional $500 billion would come from Medicare and other domestic spending programs; and interest payments on the national debt will go down.

Social Security and Medicaid are exempt from the automatic across-the-board reductions, called a "sequester." Medicare would face cuts of up to 2 percent, all from spending on health care providers, not benefits. AARP Legislative Policy Director David Certner says other programs for older people, such as Meals on Wheels, would be hurt.

President Obama on Monday night blamed Republicans for refusing to "listen to the voices of reasons and compromise." He threatened to veto any effort to stave off the automatic budget cuts. "My message to them is simple: No," Obama said. "There will be no easy off-ramps on this."

Pete Sepp, vice president of the National Taxpayers Union, says the cuts are hardly "doomsday" because they slow down growth instead of cutting from current spending levels. And the Medicare changes are small compared with the size of the program. "This is not a gigantic wound to the Medicare program," Sepp says.

Michael Tanner, senior fellow at the Cato Institute, agrees. "Spending 10 years from now will be higher than it is this year, despite cutting $1.2 trillion," he says. "The amount of debt we are facing is a severe drag on the economy."

And the supercommittee's failure to break Washington's logjam could add more drag on the economy. Frank Newport, editor-in-chief of the Gallup Poll, says the August debt ceiling showdown hurt consumer confidence. If that happens again now, holiday shopping sales could be suppressed, he says.

The deficit battles also have hurt public perceptions of Congress. The current congressional approval rating of 13 percent ties the record low. Recent polls, he says, show the public would like Congress to compromise and reduce the deficit by raising taxes and cutting spending. It's unclear, Newport says, whether the latest failure can drive approval ratings lower when they are already so low. "It's a pretty devastating report card on Congress."

The committee's failure sets up not just the automatic cuts but also potential negative reactions from financial markets and an unresolved fight over Medicare doctor reimbursement rates.

Medicare's reimbursement rate for doctors is scheduled to drop by 27 percent at the beginning of next year. Congress has faced a similar deadline in previous years and always done a last-minute "doc fix" to prevent the increase.

Sepp says the supercommittee might have been able to settle that issue for the long term as part of a large deficit reduction deal. But now it will be part of a year-end scramble along with other expiring provisions such as extra unemployment compensation benefits for workers who have been out of jobs long term and a 2 percent cut in payroll taxes. Certner says more than half of seniors don't pay income taxes. But a worker making $50,000 a year would have an extra $1,000 to spend if the payroll tax break is continued. Lawmakers must weigh that help to the economy against the additional deficit spending it causes.

The heart of the real dispute over how to get control of the nation's deficit — raising taxes and changing growing spending programs like Medicare — likely will wait now until after the 2012 presidential and congressional elections.

The six Republicans and six Democrats on the supercommittee worked for months to find a deal. But the effort devolved into finger-pointing. Republicans claimed that Democrats want to raise taxes at a time the economy can ill afford it, and Democrats charged the GOP with going after critical safety net programs such as Social Security and Medicare.

"There's a fundamental disagreement on how to approach the big issues, particularly Medicare and tax increases," Certner says. "It may be we need an election to settle that."

With economists and panels of experts calling for $3 trillion to $4 trillion in deficit reductions over the next decade, the issue will not disappear.

Certner says all the ideas that were on the table before the committee still will be under consideration. Those ideas included increases in patient costs for Medicare, a formula for a smaller cost-of-living increase for Social Security and getting rid of many tax loopholes.

Ed Coyle, head of the Alliance for Retired Americans, says advocates for older people need to continue to be on guard. "At a time when so many retirees are struggling to get by, and when today's workers wonder if they will ever be able to retire, it is unconscionable that Republicans continue to eye cuts to these programs as a way to fund an extension of tax cuts for the wealthiest Americans," Coyle says.

'We are deeply divided'

Now the deficit issues will be worked on without the protection a supercommittee deal could have offered — such as a guaranteed congressional vote and the ability to debate them without being filibustered. The debate also will include whether to continue the Bush-era tax cuts, which were enacted as a temporary measure and are scheduled to expire at the end of next year.

Republicans would like to continue them for all incomes, arguing that a slow economy is not the time to raise rates. President Obama has pushed for keeping the tax breaks for families earning less than $250,000 a year but allowing higher rates to return for wealthier families.

Already, lawmakers are complaining about the automatic cuts. Sepp says he is concerned that liberal lawmakers worried about domestic programs and conservatives upset over military reductions will work together to undo the sequester. That, he says, likely would lead to a downgrade of the U.S. credit rating.

Because the automatic cuts don't kick in until 2013, lawmakers could try to undo them after next year's election during a lame duck congressional session.

But getting agreement on undoing the cuts isn't any easier than finding the other budget deals that have proved elusive, Tanner says.

"The problem is we are deeply divided as a nation over the size of government, how to pay for government," Tanner says. "Until we argue that out at the ballot box, Congress is going to continue to reflect that divide."