Tick tock. The clock winds down for a special congressional panel charged with taking a major chunk out of the nation's deficit spending.

As the Joint Select Committee on Deficit Reduction heads toward a Nov. 23 deadline, it's still not clear whether its members will succeed in cutting deficit spending or fail just like a long string of high-level negotiators before them. 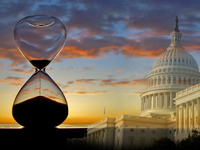 Time is running out for the congressional supercommittee to agree on deficit cuts.

President Obama urged the dozen members of the "supercommittee" to strike a deal that includes a balance of spending cuts, which Democrats have resisted, and tax hikes, which Republicans have opposed.

"There's no magic formula. There are no magic beans that you can toss on the ground, and suddenly a bunch of money grows on trees," Obama said during a news conference Monday in Hawaii.

But whether the committee of six Republicans and six Democrats can complete its mission to cut the deficit by at least $1.2 trillion over 10 years, older Americans have a lot of stake.

If no deal is reached, automatic cuts will hit military and domestic spending, including Medicare providers and funds for home-delivered meals and housing for older people. And jittery financial markets could punish the United States for its huge debt, driving up interest rates that consumers and the government pay.

"What's at stake is confidence in our democracy as well as our economic future," says Brookings Institution scholar Isabel Sawhill.

If a deficit-cutting package is passed, it could cut Social Security cost-of-living adjustments, increase Medicare costs for beneficiaries and change the tax code.

"There are still significant Social Security and Medicare cuts on the table," he says. "These would not [just] be cuts on future retirees but on current retirees."

Social Security could be trimmed

The change to Social Security's COLA formula is among the proposals that will likely be part of a deal, says Robert Bixby, executive director of the Concord Coalition, a nonpartisan organization that pushes for eliminating the federal deficit.

The "chained consumer price index" would cut the annual benefit in the first year by an average $42 per beneficiary and would be compounded annually. The formula assumes that when prices go up, citizens subsidize cheaper products — such as buying chicken instead of steak. But that smaller inflation increase isn't fair to older people because many have high medical costs that increase faster than inflation, have limited incomes and already buy cheaper products, Certner says.

"For moderate-income seniors, they are already eating chicken," Certner says. "The chained CPI is not an accurate measure for the elderly."

The formula change also would apply to other federal programs and to federal taxes, which would push people into higher tax brackets more quickly. The Social Security portion of that change alone would cost seniors $112 billion over 10 years.

The loss in benefits compounds yearly, so younger retirees would see the most effect over their lifetime, according to Max Richtman, president and CEO of the National Committee to Preserve Social Security & Medicare.

Older people could end up with less in Social Security benefits and higher costs for health care through Medicare, he says. "It's going to really squeeze a lot of beneficiaries."

Next: Higher costs for Medicare patients are a possibility. >>

Medicare is getting heavy scrutiny

Among the Medicare proposals are reduced reimbursement rates for health care providers and some higher costs for patients, along with higher premiums for wealthier seniors. Democrats on the committee have suggested new copayments for patients for clinical lab services and home care.

Certner says the committee also is considering making medigap policies more expensive. Critics of medigap argue they encourage older people to use more health services and drive up costs. But Certner says seniors are unlikely to tell doctors not to do medical tests that the doctor thinks are necessary.

Raising premiums for the wealthy could add about 15 percent to the costs of Medicare Parts B and D, Certner says. The hike likely would affect the beneficiaries earning more than $85,000 who already pay higher premiums.

"Medicare is a heavily subsidized program. Wealthier people don't need to be subsidized that much," Bixby says.

But Richtman worries that higher premiums for the wealthy make Medicare more like a welfare program, which could undermine its widespread public support.

A poll released this week asked people what they would least like to see cut. "Medicare and Medicaid" was the most popular answer, followed by Social Security and defense spending. On options like closing tax loopholes and cutting farm subsidies, more people favored cutting than protecting.

The poll was sponsored by George Washington University and Politico, a Washington newspaper that focuses on government and politics.

A more major change to Medicare — raising the eligibility age — is fading as a possibility because it's so controversial, Bixby says. Also, it would raise little money during the next 10 years because it likely would take a while to implement.

"It's common sense. People are living longer, working longer," says Brian Darling, senior fellow for government studies at the Heritage Foundation. With growth rates of 5 percent to 6 percent a year — well above inflation — Medicare needs to be reined in, he says.

Medicaid has not been center stage, but a Democratic proposal recently suggested $50 billion in cuts, including a tax on providers. Few details have been released.

Much of the committee's work has been done in secret, and Darling says that's a mistake.

"Trying to steamroll the American people with unpopular changes to taxes and entitlement reform is not democratic," Darling says.

Next: Agreement on tax breaks but not on revenue gained. >>

Taxes may be too complicated to address

In an era of political warfare, a rare front of agreement is on eliminating some tax breaks to raise more revenue and to make income taxes simpler.

But, Bixby points out, "some of the things that make the tax code more complicated, the public likes — like home mortgage interest deductions." The less popular tax breaks, like those for oil companies or corporate jets, don't cost nearly as much as mortgage deductions and other popular tax breaks.

One point of contention between the parties is how to use the additional revenue from any tax breaks that are eliminated. Democrats have pushed for lowering the deficit. Republicans have said they want to use the money to lower overall income tax rates. The top tax rate is now 35 percent but will go up to nearly 40 percent in 2013, when the Bush tax cuts are scheduled to expire. One recent GOP proposal would reduce the top rate to 28 percent.

Rewriting the entire tax code in the week before the panel's Nov. 23 deadline is seen as unlikely. The committee reportedly has considered directing that it be done but asking the regular congressional committees to work out the details later.

Darling sees that as mere wishful thinking. "If politicians failed over and over to cut this deal, why would we think it's going to happen in another year?"

Washington politicians have a long history of pulling together deals under deadline pressure, so the supercommittee could still produce $1.2 trillion in deficit savings to ward off across-the-board cuts, or a smaller package that would reduce the automatic cuts. If Congress makes the full $1.5 trillion in cuts, the debt ceiling will be raised as well, forestalling another fight on that.

If the committee fails to offer a package of deficit cuts, it will be a wasted opportunity, Bixby says. The law that established the committee gave its proposals special treatment in Congress. Any proposal would be guaranteed a vote in Congress by Dec. 23 and couldn't be amended or filibustered.

But that's only if the panel can produce a deal by the Nov. 23 deadline.

"They have superpowers. That doesn't mean they are going to do anything with them," Bixby says.