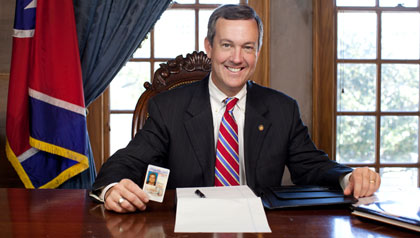 AARP worked to make sure people can get a free state ID card so they can produce the required identification before voting. Secretary of State Tre Hargett holds a sample.

It was 1960 when Shirlee Sullivan voted for the first time, proudly casting her ballot for John F. Kennedy. Nearly every election since then the Chattanooga-area resident has showed up at the polls with her voter registration card.

Earlier this year, Sullivan, now 73, was shocked to learn that soon it may not be so easy to cast a ballot. Under a law that takes effect Jan. 1, Tennessee will become one of seven states that require residents to show photo identification in order to cast their ballot.

Sullivan has a photo ID, but she is concerned about people who don't. So is AARP Tennessee.

The new rules allow for voters without approved photo identification to cast a provisional ballot on Election Day.

Voters who cast a provisional ballot will have two business days to present proper ID at their county election commission office in order for their vote to count.

But what actually happens will depend on how familiar poll workers are with the law, said Shelley Courington, AARP Tennessee advocacy director. "There are going to be hurdles on Election Day."

When the proposed rules were under discussion in the legislature, AARP Tennessee worked to make sure people could get a free state identification card if they didn't have another form of photo ID.

Because people older than 60 can decline to include a photo on their driver's license — as many as 126,000 Tennesseans have chosen that option — older residents are of particular concern.

Tennessee Secretary of State Tre Hargett, R, said they can use an expired license that includes a photograph or go to a driver service center to get a new one with a photo for no charge.

AARP Tennessee also pushed to make sure nursing home and assisted living residents were exempt if they vote at the facility.

Both provisions were included in the law, which will apply to next year's elections.

People with religious beliefs that prevent them from having their photo taken are exempt. People who cast absentee ballots by mail also are exempt; unlike younger people, those 65-plus do not need to state a non-age reason to get a mail-in ballot.

State officials say most residents have some form of acceptable photo identification, so they're focusing on helping people understand what will or won't work come Election Day.

Both the secretary of state's office and AARP Tennessee are preparing information campaigns to make sure voters are aware of the new requirement.

Residency proof a must

To get a free state ID card, Tennessee residents will need to show a birth certificate or other proof of citizenship and two items with their current address, such as a utility bill or bank statement, to prove state residency.

AARP Tennessee has received phone calls from worried voters wanting to know why they need a photo ID and how to get one.

In response, AARP Tennessee is distributing fact sheets about the new law and will conduct two conference calls to explain the new procedures.

To register to participate in the Dec. 1 or Dec. 5 tele-town hall, go to facebook.com/aarptennessee.

"It would be great to have no cases of disenfranchised voters in the 2012 election," Courington said.

You may also like: Photo ID law impact in Wisconsin. >>

Michelle Diament is a writer living in Memphis, Tenn.