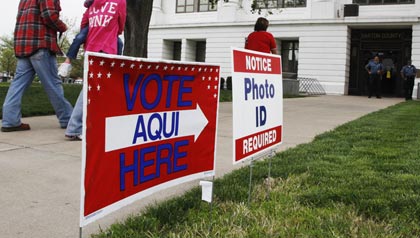 Signs such as this one may become commonplace if voters approve a referendum requiring photo IDs. Supporters say it would reduce fraud; opponents say it would keep thousands of Minnesotans from voting.

Minnesota voters will decide next month on a proposed constitutional amendment that would require people to present government-issued photo identification in order to vote in future elections.

Opponents, including AARP Minnesota, say it would disenfranchise people, particularly older and minority voters who may not have a valid photo ID. Some voters do not have a current driver's license because they no longer drive — or the required paperwork to get one, such as birth certificates or marriage licenses.

Minnesota is one of 20 states plus the District of Columbia that currently require no identification at the polls, according to the National Conference of State Legislatures.

Nearly 64,000 registered voters 55 and older do not have a valid state ID, according to Minnesota Secretary of State Mark Ritchie (D). A survey by the Brennan Center for Justice at New York University School of Law found that 11 percent of adult Americans — and 18 percent of Americans over 65 — do not have a valid, government-issued photo ID.

Unlike in other states, the amendment does not have any exemptions, such as for people in nursing homes.

"AARP's concern is with the older voter," said Michele Kimball, AARP Minnesota state director. "That is why we are in this fight."

Not everyone can easily obtain a valid state photo ID. When 13 Minneapolis nursing home residents needed photo IDs to go on a cruise, a staff member said it took nine months to help them track down birth and marriage certificates costing $9 to $39 each.

One resident, born on a farm in Mississippi and delivered by a midwife, never had a birth certificate. She was denied a state ID and missed the trip. "My heart was broken," wrote Eveyln Collier, adding that she is a registered and regular voter.

The Republican-controlled legislature passed a bill in 2011 that would have required all voters to present a valid, government-issued photo ID. Democratic Gov. Mark Dayton vetoed it. So lawmakers decided to put the issue directly to voters as a proposed constitutional amendment. If it passes, lawmakers would hash out details for its implementation next year.

Next: Legal precedent for voter ID. »

Supporters of the amendment argue that the state already has a process for people who are missing supporting documents such as a birth certificate and that the state would provide a free approved ID.

Dan McGrath, executive director of Minnesota Majority, a conservative watchdog group that is leading support for the proposed amendment, said a voter ID would protect the votes of seniors.

"Votes can easily be cast in their names without their knowledge, and other fraudulent votes steal the voice of legitimate voters," McGrath said.

Hennepin County Attorney Mike Freeman (D) said there were no cases of voter impersonation anywhere in the state in the past two elections.

"What this is is a lot of noise by the right wing trying to keep a lot of good people from voting - particularly seniors," said Freeman. "There is absolutely no need for photo voter ID in the state of Minnesota. None."

Supporters point to legal precedent as well as high-profile endorsements. The U.S. Supreme Court upheld Indiana's photo ID requirement in 2008, ruling that it "is amply justified by the valid interest in protecting 'the integrity and reliability of the electoral process.' "

A bipartisan federal election reform commission chaired by former Democratic President Jimmy Carter and James A. Baker III, chief of staff to Republican President Ronald Reagan, recommended in 2005 that all states require a valid photo ID. "Photo IDs currently are needed to board a plane, enter federal buildings, and cash a check," the commission wrote. "Voting is equally important."

But "boarding a plane, entering a federal building or cashing a check are not constitutional rights," Kimball said. "Voting is. Unfortunately, many people, especially older people, don't have the identification required under this extreme ballot initiative to exercise that right. This measure does nothing to deter voter fraud.

"The more we talk about the details of this, the more people are taking a second look. We urge people to vote no and send it back to the legislature to craft a fair, bipartisan measure," Kimball said.

Amy McDonough, AARP Minnesota associate state director for advocacy, said: "We're finding that the more we talk to AARP members about the details of this and the lack of details in the constitutional amendment, people are taking a second look. Even if they first thought, 'This makes sense — I have an ID in my pocket; I don't see what's the big deal,' I don't think most voters want to intentionally disenfranchise older people."

Amy Kuebelbeck is a freelance writer in St. Paul, Minn.