With an AARP membership, there's always more to discover. Take a look at your member benefits. 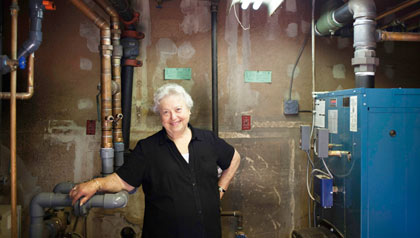 Frieda Denenmark, president of the Heritage Village Civic Association, has her eye on the boiler replacement program, supported by AARP and included in Connecticut’s new energy law.

Help is on the way for Connecticut residents battered by the highest electric rates in the continental United States as well as aggressive marketing practices by some electric suppliers.

See also: 18 ways to save on your utility costs.

Consumers could see electric rate reductions — up to 10 percent has been predicted — partially as a result of a massive reform of how Connecticut buys energy. The law passed by the legislature earlier this year sets a new energy course with dozens of policies designed to rein in costs, promote efficiency and create jobs.

The legislation makes Connecticut the second state to hire an electric power procurement manager. Previously, energy was purchased by the state's two major utility companies, which had to adhere to strict rules governing how and when they purchased power. The manager will have greater flexibility to purchase power on behalf of Connecticut residents. Those changes should mean faster reactions to market fluctuations to get the best deals.

"I think you're going to see rates down measurably in 2012 over 2010," said DEEP Commissioner Dan Esty, who noted that rates also have been falling because of lower natural gas prices.

That's welcome news for AARP Connecticut, which backed the legislation. "Our focus in our public policy is how do we get rates down," said Claudio Gualtieri, senior program specialist. "After years of paying the highest rates in the continental U.S., relief is in sight for Connecticut residents."

For low- and moderate-income households, the legislation could provide discounted electric and gas rates.

AARP Connecticut supported numerous consumer protections in the law, such as:

To promote energy efficiency, the state will develop a financing program — possibly through low-interest state-guaranteed loans — to help residents replace inefficient boilers and furnaces that are at least seven years old and have an efficiency rating of less than 75 percent. To participate, a customer must have a home energy audit, which can also be financed under the program.

The law also creates a quasi-governmental Clean Energy Finance and Investment Authority (CEFIA). This so-called green bank will help finance renewable energy projects. Part of the funding for the authority will come from electric ratepayers.

"We wanted to balance the need for support of renewable energy with the cost of electricity, and this definitely is a balance," said state Rep. Vickie O. Nardello, D-Prospect, co-chair of the Energy & Technology Committee. "We wanted to do it so it doesn't burden the ratepayers."

Heritage Village in Southbury, the largest condominium complex in the state with about 2,600 units for people over 55, uses all electric heat. Civic association president Frieda Denenmark has her eye on the boiler replacement program and another program that will finance renewable energy grants for condos.

"This is a major, major provision," she said. "I can only hope there will be financial incentives for conservation, too."