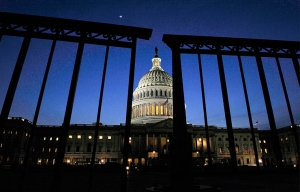 The U.S. Government is partially closed for business.

En español | Only months ago the nation teetered on the "fiscal cliff" until Congress and President Obama reached a deal to stave off calamity.

Here we are again. You probably recognize a number of factors in the latest fiscal crisis, which so far hasn't gotten a clever moniker like "fiscal cliff."

What does all this mean for you? We take a look at 20 questions and the possible answers.

1. How could Washington have prevented a government shutdown?

Congress could have funded the government past Sept. 30, the last day of the 2013 fiscal year. Lawmakers could have passed a temporary funding bill, called a continuing resolution.

3. Is the entire federal government closing?

Not all of it. By law, essential government services relating to public safety and national security must continue. This means that the military, air traffic controllers, the Border Patrol, the FBI, prison guards and many other U.S. government employees will remain on duty. But many facilities will close and many services will be unavailable. In a five-day shutdown in 1995, 800,000 federal employees were told not to report to work. Several weeks later, 240,000 employees were furloughed in a 21-day shutdown.

Social Security recipients will probably be largely unaffected by a shutdown. Checks for seniors, those with disabilities and survivors will go out as usual. But Social Security Administration employees could face furloughs.

Next page: What happens to Medicare, post offices, national parks. »

5. Will there be any disruption to Social Security?

During the 1995-96 government shutdown, the Social Security Administration stopped processing new applications for benefits, although as the shutdown dragged on, the agency eventually brought in more employees and renewed the process. It may be harder to get questions answered and problems dealt with.

6. What will happen to Medicare?

New applicants had to wait in 1995-96. There should be no immediate impact on enrollees' medical services, experts say, though reimbursements to doctors and hospitals could slow down if the contractors that process claims are deemed inessential. Still, doctors and hospitals aren't paid every day, so unless a shutdown continues for weeks, the effects will likely be minimal. A government shutdown will likely affect Social Security disability recipients who are applying for Medicare. By law, Social Security disability recipients must wait two years from the date of their receipt of disability benefits to qualify for Medicare. Delays in decisions caused by the shutdown could have a significant impact on these individuals.

7. How will veterans' benefits be affected?

Veterans Affairs services were curtailed in 1995-96. VA hospitals did not close; medical inpatient care and outpatient emergency care are considered critical services. But other services for veterans were cut back, and some benefit checks were reportedly delayed.

8. What will happen to Meals on Wheels programs?

A shutdown could have an effect on any federal program not deemed as "essential government services," as well as federal grantees like Meals on Wheels, which has already felt an impact from sequestration.

No, the U.S. Postal Service is self-funded and will continue to operate.

10. What government facilities will close?

The National Zoo, parks, museums and monuments nationwide are very likely to lock their doors, as they did in 1995-96.

11. Will Congress shut down?

No, Congress considers itself essential and will have to meet to reach a deal.

12. What happens if Congress doesn't raise the debt ceiling?

No one really knows, because Congress has always voted to raise the debt ceiling.

The government could be forced to default on some of its financial commitments, limiting, delaying or denying payments to creditors, beneficiaries, vendors and others.

Next page: A shutdown's impact on the economy. »

14. Would Social Security payments be delayed if the debt limit isn't raised?

Social Security has never missed a payment, but that doesn't mean it's impossible. When Congress threatened to let the Treasury default in 2011, AARP sent a letter to the president insisting that Social Security payments should "continue to be made regardless of congressional action to raise the debt ceiling."

15. What about Medicare and Medicaid?

Again, because there has never been a default, it is unclear what could happen to these programs. Politico reported widespread uncertainty during the debt ceiling crisis in 2011.

16. Could the economic fallout be widespread?

That's what many economic experts predict, an especially unnerving prospect for those still trying to regain retirement savings lost in the Great Recession. A delay in raising the debt ceiling before near default in 2011 resulted in the first-ever downgrade in the U.S. credit rating and a sharp drop in the stock market.

17. What impact would the second year of sequestration have?

In 2013, sequestration cut about $85 billion in equal parts from national security and other spending. Unless Congress acts, similar cuts will hit early in 2014 and for eight subsequent years.

18. What impact would sequestration have on Social Security, Medicare, Medicaid and Veterans Affairs?

There's no change in any of the benefits.

19. What does the health care law have to do with anything? The U.S. Supreme Court upheld it, and plans available from its health insurance marketplace, which is now open, take effect on Jan. 1, 2014.

Some members of Congress are still determined to withhold funding for the health care law, often called Obamacare. Some made it a reason for the government shutdown, some want to make that a condition for raising the debt ceiling.

20. What impact could the budget battles have on Social Security and Medicare?

Among the proposals to cut spending, we can expect to keep seeing some that would harm Social Security and Medicare.

Kim Keister is the news and politics editor at AARP Media.