Join us at 1 p.m. ET TODAY for a coronavirus tele-town hall: Protecting your health and caring for loved ones. Learn more.

The thorny problems of state budget deficits, Medicaid bills and programs for the poor and elderly top the agendas in 37 governors' races this fall, but it's the future political calendar that has caught the attention of astute political observers and professionals. 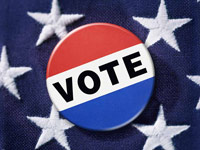 The election of 37 new governors and state legislatures in 46 states this year formally starts the reapportionment of state and federal legislative districts — the decennial event that may well determine the makeup of state legislatures and Congress in 2012. In addition, governors dominate statewide organizations, which will come into play in a big way for the 2012 presidential elections. That's why President Obama will be spending time in several of the swing states this fall, figuring that if he helps elect a Democratic governor, it would be good for him in his bid for return to office in 2012.

The competitiveness of the statehouse races is visible all over the nation. Democrats are defending 19 seats; the Republicans 18. State budget deficits, many of which exceed the federal deficit as a percentage of the budget, are creating troubles in the elections.

The "throw-the-bums-out" mentality that has bedeviled House and Senate races is just as evident in the statehouse contests, meaning that no one is safe this election year.

There are seven governorships held by retiring Democrats that Republicans expect to take — Tennessee, Oklahoma, Kansas, Iowa, Michigan, Wyoming and Pennsylvania, though Obama's campaigning and a late rush by the Democrat could make this one close. Democrats have just one Republican-held governorship they are especially optimistic they'll take — Hawaii.

Of the 18 governorships held by Republicans that are up for grabs, about a half-dozen of them are vulnerable to Democratic takeovers.

The result could be a reshuffled gubernatorial map after Election Day that could also scramble the calculations for the presidential contest in 2012.

The respected Cook Political Report sees a net gain of six to eight governorships for Republicans, which would mean good things for the GOP in upcoming political maneuvering and elections, but not a wipeout for Democrats.