En Español| Voting is easy, right? You simply show up. If the poll worker isn’t a neighbor, you might be asked for identification, but most anything will do. Then your name is checked off the list, and you vote.

Not so fast, James Madison. Over the past 18 months, state legislatures around the country have passed laws requiring voters to present government-issued IDs before they can cast a ballot. Some of the battles over the new requirements have moved from statehouses to courthouses. 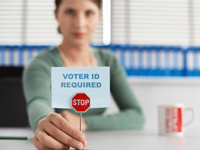 The government-issued voter ID requirement is an obstacle for many older voters.

Proponents of the laws say they are needed to fight voter fraud. Opponents say there is little evidence of voter impersonation. They say the laws not only raise unnecessary obstacles to exercising constitutional rights, but also disproportionately hamper certain segments of the population, including older voters.

Eighteen percent of voters over 65 lack a current, government-issued photo ID, according to the Brennan Center for Justice at New York University School of Law. If the most stringent photo-ID laws stand, hundreds of thousands of eligible citizens could be disenfranchised Election Day, Nov. 6.

AARP voiced its position on a number of voter ID bills, and has gone to court to challenge the laws, as have the League of Women Voters and American Civil Liberties Union (ACLU).

“AARP does not view these cases through a partisan lens at all,” says Daniel Kohrman, senior attorney for AARP Foundation Litigation. “We should not be a society where voters are forced to jump through so many hoops in order to vote, particularly if they’ve been voting for decades.”

Here are key states with photo ID laws to watch as Nov. 6 approaches:

Pennsylvania. Not only is the presidential race highly contested there, the state’s 15 percent of residents age 65 or older ranks fourth highest in the nation.

After the ACLU of Pennsylvania and other groups mounted a legal challenge, a state judge in October blocked enforcement this year of the voter ID law signed by Republican Gov. Tom Corbett in March. The law requires a government-issued photo ID card. The state has announced that it has no evidence of in-person voter fraud.

AARP joined the legal challenge to the law in a friend of the court brief filed with eight other senior advocacy groups.

Next: More key states with photo ID laws to watch. »

Minnesota. The Gopher State might have the most convoluted voter ID situation. After the Republican-controlled legislature passed a strict photo ID law and Democratic Gov. Mark Dayton vetoed it, the legislature moved to put the question to voters as a proposed constitutional amendment on the ballot this November.

The League of Women Voters Minnesota filed suit to block the referendum, arguing that the summary of the amendment that would appear on the ballot was highly misleading. AARP supported the challenge in a friend of the court brief.

Then Minnesota’s secretary of state reworded the title of the referendum, to the dismay of its sponsors.

The state Supreme Court needs to sort out all of this by Aug. 27, say state election officials, to leave time to prepare the November ballot.

Wisconsin. Two decisions in separate suits filed in state court — one by the Milwaukee NAACP, the other by the League of Women Voters — both invalidated the state’s voter photo ID law, enacted last year.

The state attorney general has appealed one decision and is expected to appeal the second. AARP is weighing its legal options. In any case, no ruling is expected until after Nov. 6, meaning a photo ID won’t be required to vote.

The University of Wisconsin-Milwaukee estimated in 2005 that nearly 180,000 state residents 65 and older lacked a driver’s license or official photo ID.

Virginia. After considering several voter ID bills that AARP Virginia testified against, the state legislature passed a law that allows a greater variety of ID to vote, including a current utility bill. But there’s a catch: If you come to the polls without acceptable ID, you can sign a provisional ballot and if you return with an approved ID within three days your vote will count.

Texas. A federal court ruled against a lawsuit that Texas filed after the U.S. Justice Department blocked the state’s voter ID law on the grounds that it discriminates against Hispanics. The case may wind up in the U.S. Supreme Court.

AARP Texas lobbied against the 2011 law, which requires voters to show certain forms of government-issued photo IDs. AARP hasn’t joined in the suit.

Next: Expect efforts to pass these laws to continue. »

South Carolina. The Justice Department twice rejected South Carolina’s photo ID law, enacted in 2011. The state attorney general has asked a federal court to allow the law to go into effect, but the case won’t be heard until late September.

A year ago the state election commission said that nearly 217,000 registered voters in South Carolina didn’t have a state-issued photo ID. Now the commission is expressing concern about being able to provide photo IDs by Nov. 6 if the court allows the law to go into effect. The commission also said it has no documented cases of voter impersonation at the polls.

Battles over voter ID laws have played out in a number of other states, many with involvement by AARP state offices or AARP Foundation Litigation. A law challenged in Missouri fell, but those challenged in Arizona, Georgia, Indiana and Michigan were upheld. AARP and allies thus far have succeeded in setting aside a law requiring Arizonans attempting to register to vote to present proof of citizenship. This requirement is unnecessary, AARP argues, given that all such voters face serious criminal penalties if they violate a signed and sworn oath that they are citizens.

Marsha Mercer is an independent journalist in Northern Virginia.

You may also like: The new technology at the polls.