Viviette Applewhite has marched for civil rights and has voted in nearly every presidential election since 1960.

"I believe in saying what I think," says Applewhite, 93, of Philadelphia. 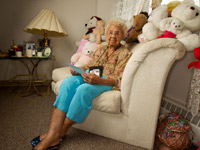 Viviette Appelwhite is challenging the law requiring voters to show a photo ID.

Applewhite is lead plaintiff in a lawsuit challenging the law, which requires voters to show a photo ID. In August a state judge refused to grant the suit’s request for an injunction that would block the law for the November election. The decision was appealed by the American Civil Liberties Union of Pennsylvania and other groups that filed the suit, contending that the law imposes a heavy burden on voters.

Pennsylvania is one of 30 states with voter ID requirements of some kind for 2012.

But that's not the end of her worries, says Witold Walczak, legal director of the Pennsylvania ACLU. To get a photo ID, Applewhite also needs a Social Security card, and she'll need to make a trip in her wheelchair to a Social Security office, he says.

"What we're finding is this law disproportionately affects the elderly who no longer drive and have mobility problems," Walczak says.

You may also like: U.S. Supreme Court rules on Affordable Care Act.

A look at voter ID requirements; is it a tool aimed at adding election transparency or is it a form of voter discrimination?