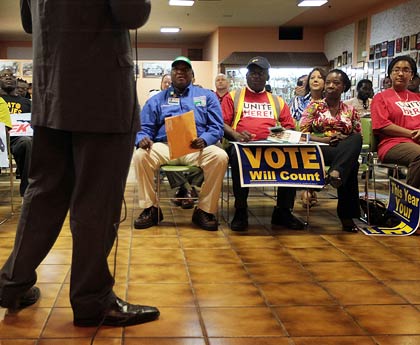 You’ve heard plenty of personal attacks and seen the negative ads. But where do this fall’s general election candidates stand on issues important to you? AARP Florida is helping you find out by co-sponsoring the state’s leading series of debates.

In addition, there will be forums for candidates running for statewide Cabinet offices Oct. 5 at the Bob Graham Center for Public Service at the University of Florida.

“These debates will provide opportunities for voters to cut through the negative attacks and to focus on the issues that matter to them,” said AARP Florida State Director Lori Parham. “For example, how do the candidates propose to re-energize Florida’s economy? That is a great concern for Floridians. In these debates, we hope to hear how candidates would lead Florida to regain its top ranking in attracting retirees. Other states are competing for retirees because they know that attracting older residents can supercharge their economic growth.”

Parham noted that in the last decade, Florida has slipped from the nation’s leading retirement relocation destination to No. 4, behind Arizona, Texas and North Carolina. By regaining the state’s No. 1 relocation spot, Florida could revive many jobs.

According to a leading Florida economist, Dr. James Zingale, more than 650,000 of the jobs lost in Florida in the last three years were in three sectors heavily influenced by older Floridians – real estate, construction and finance.

Parham said AARP Florida also hopes to hear from U. S. Senatorial candidates about their plans to protect Social Security and to keep it strong for future generations. Some voices in Washington are suggesting that reductions to Social Security benefits could aid efforts to shrink the federal deficit.

“Social Security has never contributed a dime to the deficit,” Parham noted. “It should not be included as a deficit-reduction strategy.”

“AARP will provide opportunities for voters of all ages to understand exactly where the candidates stand on the key issues of the day,” Parham said. “AARP Florida is proud to bring this debate series to voters.”

In addition to the debates, AARP Florida also will bring Floridians a series of voters guides www.aarp.org/yourvote, which provide information on where candidates for federal office stand on issues important to older Floridians. Please go to to learn more.

The debate series is brought to Floridians by Leadership Florida, the state’s leading leadership-development organization, and the Florida Press Association. In addition to AARP Florida, other organizations supporting the debate series include the Claude Pepper Center and the Claude Pepper Foundation of the Florida State University, the Florida League of Cities and the Florida Association of Insurance Agents. The debates will be hosted by Nova Southeastern University and the Bob Graham Center for Public Service at the University of Florida. The honorary co-chairs of the debate series are former Florida Govs. Bob Martinez, a Republican, and Bob Graham, a Democrat.

The debates will be broadcast statewide on network television stations in each of Florida’s 11 major media markets. Stations anchoring production of the debates include WPLG-TV Ch. 10 (ABC) in Miami, WKMG-TV Ch. 6 (CBS) in Orlando and WJXT-TV Ch. 4 in Jacksonville. The debates will also be broadcast in Fort Myers, Gainesville, Panama City, Pensacola, Tallahassee, Tampa Bay, Sarasota and West Palm Beach. In addition, the debates will be carried live on Florida radio and will be covered extensively by Florida newspapers. Please look in your local broadcast listings for the debates.

Decision 2010: Before You Vote