Election season is upon us, which means you'll soon be bombarded with attack ads and robocalls. One thing you won't hear? Catchy campaign slogans. "All the Way With LBJ" has been replaced by "Believe in America" and "Forward." 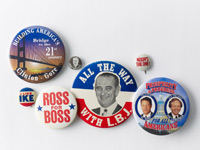 In past and present campaigns, the candidates' slogans — the good and the bland — influence the voter.

And if you can't tell which snoozy saying belongs to which presidential candidate, that's a problem, because the candidate with the best slogan usually wins, says Steve Cone, an AARP executive vice president and author of Powerlines: Words That Sell Brands, Grip Fans & Sometimes Change History. Dwight Eisenhower's "I Like Ike" trounced Adlai Stevenson's "The Experienced Candidate"; Ronald Reagan's "Are You Better Off Than You Were Four Years Ago?" was more memorable than Jimmy Carter's "It's a Matter of Values." When both taglines are equally blah — JFK's "A Time for Greatness" versus Nixon's "Experience Counts" — it's a close race, says Cone.

"Slogans work for one of two reasons: Either they reinforce the candidate's personality or focus on an issue Americans can rally around," he explains. But with campaigns now making decisions by committee, "candidates can no longer find the right words to define themselves," Cone says. The proof? John McCain changed his slogan six times.

A candidate can have a spirited catchphrase and still lose - Barry Goldwater's "In Your Heart You Know He's Right" is a prime example - but a popular slogan can boost votes by 1 or 2 percent, says Robert Lehrman, former chief speechwriter for Al Gore. Better 2012 slogans may be on the way: Candidates tend to spend more money on media buys after Labor Day, adds Lehrman, "when voters start to pay attention." And in case you're wondering, "Forward" belongs to Obama, while Romney says "Believe in America." Neither of which is as catchy as "Keep Cool With Coolidge."

You may also like: Will you be allowed to vote in the 2012 election?