See also: Taxes are no burden for GE. 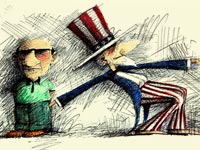 At least 3,700 businesses that received government contracts or grants under the American Recovery and Reinvestment Act of 2009 are delinquent on a whopping $750 million-plus in unpaid corporate income tax, payroll taxes, and excise and unemployment taxes, according to a report from the Government Accountability Office.

And that figure is probably an underestimate, since the report doesn't take into account businesses that failed to submit tax returns altogether.

The companies that federal investigators are calling out collected a combined $24 billion for everything from construction to security work.

The kicker: Federal agencies could not have done much to prevent delinquent companies from securing the contracts. That's because federal law does not require them to be current on tax bills in order to do business with the government.

"Since the problem of federal contractors who get paid with taxpayer dollars while dodging their own tax obligations isn't going away, we need to do more to stop the abuse," said Sen. Carl Levin, D-Mich. "Tax deadbeats should not be getting taxpayer dollars, and they shouldn't be allowed to compete against honest businesses that meet their tax obligations."

You may also like: Clear the clutter after tax season. >>