Editor's note: The following article was adapted from "Flacking for Big Pharma," published in the summer 2011 issue of The American Scholar.

When John Abramson, M.D., author of Overdosed America: The Broken Promise of American Medicine, lectured at Harvard's 2008 Ethical Issues in Global Health Research course, he dismissed much of the content of contemporary U.S. medical journals — widely embraced as irreproachable bastions of disinterested scientific evaluation — as "little better than infomercials."

It is true that Big Pharma, as the top tier of the $310 billion pharmaceutical industry is known, advertises copiously and often inaccurately in peer-reviewed medical journals, impinging heavily on editorial content, sometimes with surprising brazenness. It's also true that medical journals are utterly dependent on pharmaceutical advertising, which can provide 97 percent to 99 percent of their advertising revenue. But what prompted Abramson's especially harsh assessment? 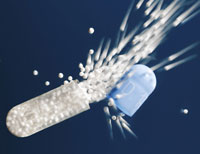 Doctors and patients seeking nonbiased research can dig into the following books and websites:

The Truth About the Drug Companies by Marcia Angell

Our Daily Meds by Melody Petersen

A medical reviewer is supposed to be an expert in the field who evaluates medications, devices and practices, distilling expertise and informed, disinterested opinion for a journal's readership. Journals do not pay the authors of such articles. But the manufacturers of the drugs and products in question often do.

Today, an estimated 95 percent of the academic-medicine specialists who assess patented treatments have financial relationships with pharmaceutical companies. Drs. Paul M. Ridker and Jose Torres at Harvard Medical School found that 67 percent of the results of industry-sponsored trials published from 2000 to 2005 in the three most influential medical publications favored the sponsoring company's experimental heart drugs and often its devices. Trials funded by nonprofits, however, were as likely to support the drugs or devices as to oppose them.

Moreover, many biased medical-journal articles are not even the work of physicians or scientists, but of ghostwriters who script them in accordance with the drugmakers' marketing messages. A medical expert is found who, for a few thousand dollars, is willing to append his or her signature, and then the piece is published without any disclosure of the ghostwriter's role.

Save on prescriptions. Do

Use a pill identifier. Do

In September 2010, Adriane Fugh-Berman, M.D., of the Georgetown University Medical Center, drew back the veil on a ghostwriting campaign undertaken by Wyeth, a drugmaker now a part of Pfizer. At the time, Wyeth had been promoting Premarin and Prempro, its brands of hormone replacement therapy (HRT). By shoring up hormone levels, HRT promised to preserve health and femininity indefinitely by treating the biological torments triggered by menopause, such as heart disorders, troubled skin, hot flashes, vaginal dryness and insomnia.

Next: How to check for bias in peer-reviewed articles.

But some medical data suggested links between HRT and cancer, so an alarmed Wyeth poured resources into addressing this hazard — by hiring ghostwriters at the publicity firm DesignWrite to promulgate the company's sales messages in the form of more than 50 articles for peer-reviewed medical journals, as well as supplements, medical abstracts and reports. From 1997 to 2003, DesignWrite scribes followed Wyeth's instructions to, as Fugh-Berman notes in an article published in PLoS Medicine, "mitigate perceived risks of hormone-associated breast cancer," to "promote unproven, off-label uses, including prevention of dementia, Parkinson's disease, and visual impairment," to "raise questions about the safety and efficacy of competing therapies (competitive messaging)," to "defend cardiovascular benefits" and to "position low-dose hormone therapy."

Eighteen medical journals published DesignWrite's HRT spin control, including the venerable American Journal of Obstetrics and Gynecology and the International Journal of Cardiology. Between the introduction of Prempro in 1995 and 2002, 13 million women, representing 38 percent of the postmenopausal women in the United States, were taking HRT, garnering $3 billion in sales a year.

However, Wyeth persisted in "educational" efforts, such as seminars directed at doctors who had withdrawn their patients from HRT — some scripted by the ghostwriters of DesignWrite.

What help exists for doctors, who need to know the potential sources of bias in peer-reviewed articles? Several books offer clear, impeccably researched guides to sniffing out manipulation. Marcia Angell's The Truth About the Drug Companies and Abramson's Overdosed America are likely to be most helpful to a busy clinician. PharmedOut.org offers tools for detecting undue influence in medical research and publishing.

Leadership has also come from open-access journals, including the Public Library of Science publications. Their business models vary, but because they don't accept pharmaceutical advertising or funding and are usually freely accessible to all online — in contrast to journals that must maintain income to answer to stockholders — open-access publishers can keep their hands in their pockets and avoid the rest of the profession's rampant conflicts of interest.

Harriet Washington is the author of Medical Apartheid: The Dark History of Medical Experimentation on Black Americans From Colonial Times to the Present. Her new book, Deadly Monopolies: The Shocking Corporate Takeover of Life Itself — And the Consequences for Our Health and Our Medical Future, will be published in October.