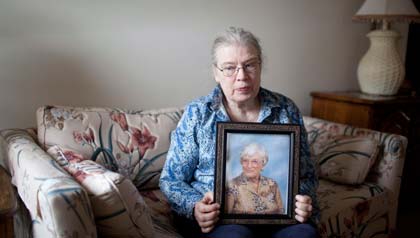 Carol Rudy recalls the obstacles that her mother, Isabel, faced trying to get a photo identification. She worries that a proposal to require a photo ID might prevent older residents from voting.

Isabel Rudy was a conscientious voter throughout her 94 years, including serving for many years as an election judge. But obtaining a state photo ID proved so daunting she eventually gave up.

Her experience is just one example of why many older voters could be disenfranchised if, as expected, a proposed constitutional amendment that would require all Minnesotans to present a photo ID at the polls is ratified by voters in November.

See also: Can we still vote?

Rudy, who died in 2010, wanted a photo ID in order to make it easier to cash checks. So with her daughter's help, she tried to get one using an expired driver's license and her Social Security card a few years ago. But because the license had expired, a birth certificate was required along with a marriage certificate to prove that her last name had been changed. The problem was that the 1915 birth certificate had an error, likely caused by the poor English skills of her Polish-immigrant parents, according to her daughter, Carol Rudy, 69, of Ramsey.

They decided that seeking a corrected document from her place of birth in New Jersey was one step too many, and gave up. But Carol Rudy said that if a photo ID had been required to vote, "we would have figured out a way to get her the ability to vote." A retired American history teacher, Carol noted that her father was active in the Republican Party and that politics have always been significant for her family.

"I can't picture that we would have let it go," she said. "Some things are important."

With polls showing about 80 percent of Minnesotans support a photo ID requirement — including nearly two-thirds of Democrats and more than 90 percent of Republicans — the amendment is an attempt to circumvent Gov. Mark Dayton, D, who vetoed a similar bill last year. If it is approved, the legislature would flesh out the rules for it to take effect in subsequent elections.

"One of our biggest concerns is that this is an unnecessary barrier between the voter and the ballot," Wang said.

"It's a hard thing to explain to people because most of us have wallets or purses filled with IDs, and we're fairly accustomed to pulling them out on a regular basis."

But many older residents don't have official photo IDs. Among them are people who no longer drive or who never had a driver's license — many of them women — and people without an official birth certificate, such as some who were born at home in the early 20th century and whose birth record consists of a handwritten entry in the family Bible.

"Attempting to find the required documentation from decades past has been found to be extremely difficult for family members — and nearly impossible for a frail elder," said Patti Cullen, president and CEO of Care Providers of Minnesota, which represents nursing homes and home- and community-based caregivers.

People moving into assisted living or nursing homes close to Election Day also might fall through the cracks if they didn't have the time — or help — to get a photo ID with a current address, said Amy McDonough, associate state director for advocacy for AARP Minnesota.

State Rep. Mary Kiffmeyer, R-Big Lake, who oversaw Minnesota elections for eight years while secretary of state, is leading the effort to require voter photo IDs. She said voting is such an important constitutional right that it needs more safeguarding from fraud than cashing a check — not less.

"A vote is infinitely more valuable," she said.

To critics who say there is no evidence of widespread voter fraud, Kiffmeyer responds: "How do you know? Without a photo ID, how do you know whether or not you have fraud?" She noted that courts have upheld voter ID laws elsewhere without evidence of fraud, ruling that shoring up public confidence in elections and deterring and detecting fraud are sufficient reasons to implement voter ID.

Kiffmeyer promised that the referendum bill would be "written in a way that allows a path for [older people] to get what is needed."

"The seniors are my greatest concern," she said, "but I'm confident with our approach to make sure their ability to vote is protected."

The League and AARP Minnesota plan to inform the public about the implications of voter ID proposals, especially for older citizens. They hope the details will give voters pause.

"Traditionally, older voters participate year in and year out, and have for their entire lives," said Seth Boffeli, AARP Minnesota communications director. "This is a really big part of these people's lives that now is going to be called into question."

Amy Kuebelbeck is a freelance writer in Saint Paul, Minn.