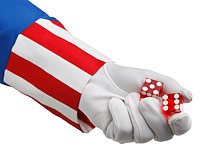 Is Washington gambling with the nation's future?

In Spanish | Here we go again: Congress and the White House simply can't get past their budget differences.

At this point, the nation is no longer facing a single trigger point that would unleash economic calamity. Instead, with no deal in sight, we face a series of them:

The most pressing question right now: What impact will the sequester have? No one really wants these cuts, but neither has anybody come up with the silver bullet to stop them.

So here's what you should know:

I'm on Medicare. What happens to my benefits?
Good news. No change in Medicare benefits, including Part D low-income premium and cost-sharing subsidies and catastrophic subsidy payments.

Will Medicare pay my doctor for my visit?
Yes, your doctor will still be paid, but not quite as much. Like all Medicare providers, doctors will take a 2 percent cut in payments. That won't please the docs, but let's hope it isn't enough to make yours — or any of them — drop Medicare patients.

What about Medicaid and Veterans Affairs compensation payments?
The same as for Social Security — no change in benefits. That's also true for SNAP (formerly the food stamps program) and Supplemental Security Income (SSI).

Will Meals on Wheels keep delivering to my home?
The program will take a hit, although the immediate effect is unclear. Long-term, it could mean 4 million fewer meals for older people, according to the White House budget office.

What will happen to the economy?
That's a tough one. Predictions aren't nearly as dire as they were for the fiscal cliff, but economic growth will likely slow and, by some estimates, up to 1 million jobs could be lost. A few economists even say we'll slip back into recession.

What could happen to my retirement investments?
That's anyone's guess. Many Wall Street analysts think the stock market will tumble as a result of the projected decline in gross domestic product — and the gridlocked situation in Washington. Others, though, think the markets will show little change — and even improve in the long run. So, depending on where your money is, this could have different effects on your portfolio. Still, all this is highly speculative at this point.

If you're relying on your investments right now for retirement income, your situation is just as unpredictable.

What if I have plans to visit a national park?
Definitely check ahead. A National Parks Service memo instructs staff to plan for sharp cuts in the ranks of park rangers and deep cuts in park hours and services.