Americans are less civil today than they were a decade ago when they debate issues facing the country, and politicians are partly to blame, according to an AARP Bulletin poll.

Nearly three in four adults (71 percent) surveyed say they believe people are respectful to each other, but only one in two (53 percent) says that civility carries over when Americans debate national issues.

The poll of the 1,006 people age 18 and older was conducted in January.

Overall, 30 percent of younger adults ages 18 to 49 say that a lack of civility is prevalent in America, while 20 percent of adults 50-plus feel that way, the poll found.

More than two in three (69 percent) say politicians have a negative influence over how Americans treat each other. About half blame popular music (53 percent) and talk radio (50 percent) for the lack of respect and courtesy among people.

Adults 50 and older (17 percent) are more likely than their younger counterparts (11 percent) to say that talk radio has a "very" negative effect on how people treat each other. Conversely, 42 percent of all Americans say it has a positive effect.

Slightly more people (47 percent) believe Facebook, Twitter and other social media negatively affect people's attitudes; 42 percent say that influence is positive, the poll found. Cable television was considered a negative influence on civility by 47 percent of respondents but a positive one by 49 percent. 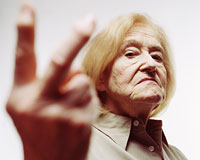 Overwhelmingly (85 percent), those polled said parents or guardians should primarily be held accountable for teaching civility; 7 percent said schools should be responsible, followed by government (5 percent) and religious institutions (1 percent).

James McCloud, 64, a father of five from Salem, W.Va., says he believes that children and young adults are less respectful today, and that parents must do a better job of instilling civility. The grandfather of 13 also says his adult children are not as strict with their kids as he had been as a parent.

"Younger people don't care how they talk to or deal with others anymore, especially older people," McCloud says. "We were slapped upside the head or swatted on the buttocks if we talked to our parents in the way that kids talk to their parents today."

Civility apparently takes a back seat for some when they're behind the wheel. Thirty-two percent of those 50-plus say they were most likely to lose their cool while driving; 31 percent said at home; 9 percent said in stores or restaurants, and 8 percent said at work.

Among younger people surveyed about where they lose their temper, 34 percent cited driving, 32 percent said at home, 17 percent at work, and 7 percent at stores or restaurants.