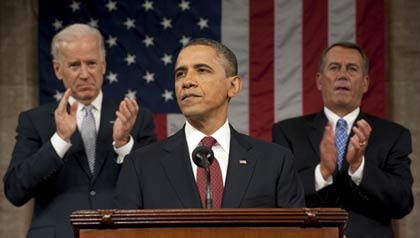 En español | President Obama called for aggressive government action to boost the economy in his State of the Union message on Tuesday night, as he outlined a populist appeal for fairness that he’s likely to repeat often on the campaign trail.

See also: Tell us what you think about Social Security.

In his call for “a renewal of American values,” the president devoted little attention to Social Security, Medicare and Medicaid. He made no pitch specifically aimed at older Americans — a clear signal that the White House would just as soon keep those issues on its election-year back burner, at least for now.

In 2008, Obama’s Republican opponent, Sen. John McCain of Arizona, won the support of 65-plus voters 53 percent to 45 percent – the only age group in which McCain outpolled Obama.

“I’m prepared to make more reforms that rein in the long-term costs of Medicare and Medicaid, and strengthen Social Security, so long as those programs remain a guarantee of security for seniors,” Obama said Tuesday night. “But in return, we need to change our tax code so that people like me, and an awful lot of members of Congress, pay our fair share of taxes.”

The prospect of changes in the three programs only in the context of a deal to raise taxes on the wealthiest Americans is regarded as a nonstarter for congressional Republicans, who oppose any tax rate hikes.

The president said that without higher taxes on the wealthiest Americans, “somebody else has to make up the difference — like a senior on a fixed income; or a student trying to get through school; or a family trying to make ends meet. That’s not right.”

Gov. Mitch Daniels of Indiana, who delivered the official GOP response to the president’s speech, countered that Obama’s “trickle-down government” has held back the nation’s economic recovery, and he urged action on Medicare and Social Security. “We must unite to save the safety net,” Daniels said. “Medicare and Social Security have served us well, and that must continue. But after half and three-quarters of a century, respectively, it's not surprising they need some repairs. We can preserve them unchanged and untouched for those now in or near retirement, but we must fashion a new, affordable safety net so future Americans are protected, too.”

Daniels seemed to be endorsing the concept of means testing, where those who need help the most would get assistance, while the wealthiest would get reduced – or no – benefits. “The mortal enemies of Social Security and Medicare are those who, in contempt of the plain arithmetic, continue to mislead Americans that we should change nothing,” he said. “Listening to them much longer will mean that these proud programs implode and take the American economy with them.”

Should the party’s standard-bearer embrace Daniels’ approach, the debate over the future of the programs will almost certainly move to center stage in the 2012 presidential campaign.