Myth: If you want to save the planet at every meal, reduce the "food miles" to your plate.

Facts: Eating foods produced in one's immediate geographic area, whether defined as a 100-mile radius or within state boundaries, caught on as the latest trend in the food world, with the New Oxford American Dictionary naming "locavore" its word of the year in 2007. Today grocery store placards tout "local," and restaurant menus cite nearby farms and ranches by name. People seek out locally produced food for a whole host of reasons — supporting local farms, preserving genetic diversity of crops, and fostering community, to name a few. 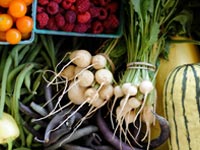 Eating locally may not be as protective to the environment as previously believed.

For many people, the chief reason to eat local is to reduce the greenhouse gasses emitted when food is transported long distances. Minimizing "food miles" — the distance a turnip or steak travels from farm to plate — means bringing our food shorter distances before we eat it. Shorter distances mean less fuel, we reason, which in turn means reduced greenhouse gas emissions.

But recent research is challenging this logic.

"Food miles are a poor indicator of greenhouse gas emissions or environmental impact," says Rich Pirog, senior associate director of the C.S. Mott Group for Sustainable Food Systems at Michigan State University. "All food miles are is a great indicator of localness. It's a metaphor for comparing local and global systems. But it is not a proxy for environmental impact." Pirog should know. His 2001 report, "Food, Fuel, and Freeways," ignited the food miles discussion nationwide, and he has continued to work on the subject over the past decade.

Pirog cites a 2008 study in which two Carnegie Mellon researchers looked at greenhouse gas (GHG) emissions associated with food in the United States. They found that the vast majority, 83 percent, of GHG emissions happen in the production phase — in applying fertilizer to crops and managing manure from livestock, for instance. Only about 11 percent of emissions could be chalked up to transportation. A 2010 study by the U.S. Department of Agriculture placed that number even lower — it found that less than 5 percent of the energy used in the U.S. food system goes to commercial transportation. Still another study, this one conducted at the University of Michigan, pegged that number at 13.6 percent.

With transportation responsible for such a slim margin of food's GHG emissions, it would be hard to significantly cut them just by buying local. Plus, local markets in most places lack the economy of scale that can actually make food from far away more energy-efficient. "You've got to make a lot of trips in a light pickup truck to feed the same number of people that you'd feed with a semi," says Pirog.

A more effective approach? Choose foods that cause fewer GHG emissions during production. Red meat production, according to the Carnegie Mellon study, is some 150 percent more GHG-intensive than that of chicken or fish. According to Christopher Weber and H. Scott Matthews, the study's authors, "Shifting less than one day per week's worth of calories from red meat and dairy products to chicken, fish, eggs or a vegetable-based diet achieves more GHG reduction than buying all locally sourced food."

Beth Goulart is a freelance journalist based in Austin, Texas.