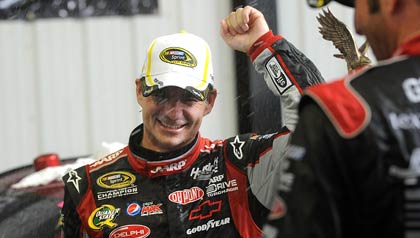 Jeff Gordon wins his first race of the season at Pocono.

LONG POND, Pa. (AP) — In a race marred by the death of a fan hit by lightning, Jeff Gordon earned his first victory of the season on Sunday, taking advantage of an accident sparked by teammate Jimmie Johnson and going on to win when the race was called because of a downpour preceding the fatal storm.

Jeff Gordon wins the Pennsylvania 400 at Pocono in AARP's Drive to End Hunger Car No. 24. This is Gordon's first win of the season.

After the race, Pocono officials said one person died and nine others were injured after a lightning strike in the parking lot behind the grandstand.

"You hate to hear something like that," Gordon said. "Certainly our thoughts are with them."

Monroe County Coroner Bob Allen would only identify the victim as a 41-year-old Pennsylvania man. The victim was in or near his car in a parking lot after the race had ended when lightning struck the car, Allen said.

Gordon earned his 86th career victory, winning for the first time since September 2011 at Atlanta Motor Speedway to thrust himself into wild-card contention in the Chase for the Sprint Cup championship.

This win meant more than about all the others for Gordon. This was the first time his wife and both of his two young children joined him celebration.

"That experience to me today means so much more than anything else," he said.

Johnson inadvertently gave his Hendrick Motorsports teammate the help he needed. Johnson's No. 48 had a flat tire off a restart and slammed Matt Kenseth into the wall. Kenseth slid down the track and took out Denny Hamlin and three other cars.

With an unexpected opening triggered by the accident, Gordon zagged and zipped the No. 24 through holes like an All-Pro running back, splashing his way to victory.

"When I saw the opening to get inside, I was taking it," Gordon said.

It couldn't have come at a better time. The skies opened and cars were ordered off the track. The race was called moments later with 98 of the 160 scheduled laps completed. Gordon, who started 27th, had a drive to remember.

Gordon, who turned 41 on Saturday, had a string of bad breaks this season and knew he needed wins over the final six races before the Chase cutoff to have any shot at running for a fifth championship during the 10-race playoffs. The win moved him into the second wild-card spot that would guarantee a berth in the field.

Gordon, who also won a rain-shortened race at Pocono in 2007, passed Bill Elliott for most career wins at Pocono with six.

Gordon had winless seasons in 2008 and 2010 — a late-career drought far removed from the years when he was a regular in Victory Lane. He had double-digit victories in three straight seasons (1996-98) and seemed a lock to hit 100 victories by 35 and put himself behind only Richard Petty on the all-time list.

Petty leads with 200 wins and David Pearson is second with 105. Gordon is a comfortable third on the list.

He had a painfully mediocre start to season — including consecutive 33rd and 35th place finishes at Talladega and Darlington — before finding his groove of late with crew chief Alan Gustafson.

Gordon has three straight top-six finishes and has finished in the top six in six of his last seven races.

He was due for a breakthrough and kept grinding it out.

"The last several weeks, we've had something to build on," Gordon said.

Kahne refused to rule out another Gordon championship run if he stays in the Chase field.

With the storms coming — spotters told their drivers the heavy rain was coming — Johnson was in prime position to follow last week's win in Indy with another trip to Victory Lane. Johnson had a flat, though, and he made contact with Kenseth. Johnson dropped back but suffered no real damage. Kenseth touched the wall and slid down the track. Hamlin had nowhere to go except right into the side of the No. 17.

Hamlin was taken to the infield care center and complained of discomfort around his abdomen but was released.

Gordon, who was sixth in the restart necessitated by Kurt Busch's wreck, took off and took the lead.

"I know that you don't want to win them quite like this, but we've earned it because of all the things that we've done this year," Gordon said.

"I shouldn't feel bad about that, but not much you can do with a right-rear flat," he said.

Then the downpour came. The scheduled 400-mile race had already been postponed about two hours because of rain.

"For all the things that have gone wrong for us this year, I still can't believe what just happened," Gordon said. "But, I think this is the one that makes up for all the ones that have gotten away. I'm just so proud of this team."

While Kahne and Gordon had a great race for Hendrick, Johnson and Dale Earnhardt Jr. had one to forget.

Earnhardt was lucky to maintain his overall points lead after he was forced to the garage on lap 51 because of a busted transmission. He later returned to the track and finished 32nd.

Rain or shine, the race belonged to Gordon.