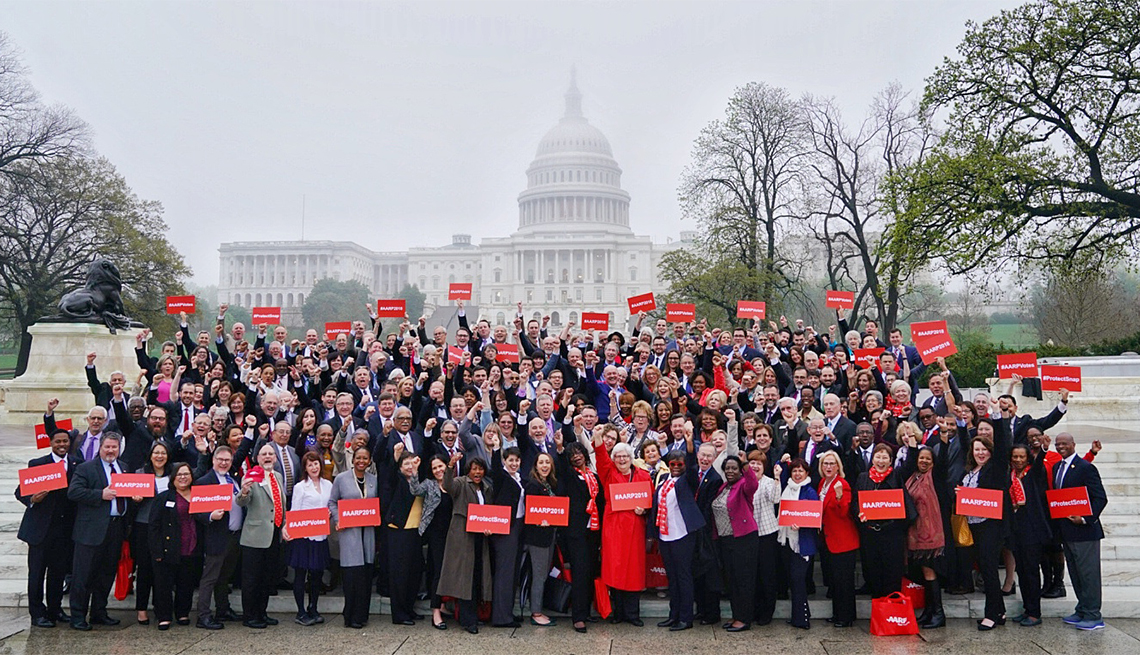 Leaders and volunteers from AARP’s state and territorial offices converged on Congress, pressing lawmakers to protect policies and programs vital to Americans 50 and older.

From Hawaii to Maine, Alaska to the U.S. Virgin Islands and Texas to Oregon, leaders and volunteers from all 53 of AARP’s state and territorial offices converged on Congress Wednesday, pressing lawmakers to protect policies and programs vital to the health and finances of Americans age 50 and older.

More than 300 AARP advocates fanned out to 400 meetings with Republicans and Democrats in the House of Representatives and the U.S. Senate.  They had three main messages for lawmakers and their staffs: Make the current 7.5 percent medical expense tax deduction threshold permanent; protect the Supplemental Nutrition Assistance Program (SNAP) that provides food to millions of older Americans, and show support for family caregivers by joining the caucus created to help America’s 40 million family caregivers.

AARP advocates not only represented the organization’s 38 million members, they spoke for citizens whose high voting turnout reflects the need for lawmakers to pay attention to them. In 2016, more than 90 percent of registered voters over 50 went to the polls and in 2014- the last midterm election, 75 percent of 50 plus registered voters cast ballots. Those turnout numbers dwarf all other age groups.

One of the most urgent issues on the AARP advocates’ agenda was the tax deduction for medical expenses.  Unless the law is changed, as of January 2019 the deduction will only be available to taxpayers whose health care expenses exceed 10 percent of their income, rather than 7.5 percent.   Adults 50 and over make up nearly three-quarters of the nearly nine million Americans who use the medical expense deduction to offset high health care costs.

Erin O’Quinn, deputy chief of staff for Rep. Ami Bera, D-Calif., told AARP California State Director Mark Beach that the medical expense issue is “incredibly important for people who are middle class and for those in longterm care.”  O’Quinn, whose boss is a physician, assured the AARP visitors that Bera is steadfastly behind the 7.5 percent threshold.

The AARP contingent also urged lawmakers to protect SNAP from changes that would make it harder for those in need to qualify for food aid.  They said SNAP is a lifeline for the approximately 10 million Americans 50 and older who struggle with food insecurity.

The farm bill sent to the House floor earlier this month by the Agriculture Committee imposes a stricter work requirement for SNAP on adults age 50 to 59. AARP advocates pressed members of the House and Senate to reject the expansion of work requirements for SNAP, noting the program’s positive impact on the health care of its recipients and the fact that it takes longer for older workers to find permanent employment.

In a meeting that AARP’s Arkansas contingent and AARP National Volunteer President Eric Schneidewind held in Sen. John Boozman’s office, the Arkansas Republican’s staff pointed out that the senator is a co-chair of the Senate hunger caucus. Boozman is very committed to trying to alleviate hunger domestically and abroad, according to one of his legislative assistants. Boozman’s staff also said he is working with his colleagues on the Agriculture Committee to develop a bipartisan farm bill.

Throughout the day, AARP advocates encouraged members of Congress to join the Assisting Caregivers Today (ACT) Caucus, a bipartisan group that brings together members of the House and Senate looking for solutions to help America’s unpaid family caregivers. As they made the rounds on lawmakers’ offices, they also thanked those who are members of that caucus, including Boozman. AARP Arkansas’ Associate State Director for Advocacy, Vanessa Nehus, pointed out that Arkansas alone has over 450,000 family caregivers.

David Certner, AARP’s legislative counsel and legislative policy director, says Wednesday’s visits “provided an opportunity for the members of Congress to have a conversation on the key issues with their constituents” rather than just with those based in Washington.  “The people from back home have much more of a sense of what’s going on in their state and can bring those concerns in a more personal way,” Certner says.

Two AARP state directors echoed Certner’s views about the value of personal stories and of the state-specific data the AARP advocates presented to the lawmakers.

“It’s a chance to talk to our Congressional delegation on how these bills will impact people in Hawaii directly,” says Barbara Kim Stanton, AARP’s Hawaii state director.  “They’ll hear not just the facts but stories that resonate.”

AARP Arkansas State Director, Herb Sanderson, says these visits armed lawmakers and their staffs with the data they need to make the case for AARP’s priorities.  “Members of Congress have a lot of business before them and it’s hard for them to know the details,” Sanderson says. “We provide specific state data and build relationships.”