Ordinarily, I'm not the kind of guy who chooses to dance in front of strangers. But there I was, circling the room hand in hand with other audience members, led by a Native American dance troupe in Oklahoma City in October. The dance was part of an inspiring annual ceremony honoring 50 Native American elders, sponsored by AARP Oklahoma. It struck me once again how lucky I am to have the opportunity to travel on behalf of AARP and witness firsthand so many of the remarkable projects we create.

AARP Oklahoma’s Annual Indian Elder Awards has for nine years brought together representatives from all 39 tribes in the state, meeting in harmony to pay tribute to the wisest and most experienced among them. It’s a rare gathering, and I was proud to dance in their honor.

The Oklahoma ceremony was an excellent reminder that, at AARP, we reach deeply into multicultural communities in ways that community members have told us best meet their needs.

We learned that among Asian Americans and Pacific Islanders, the danger posed by fraud is a particular concern. We now have videos exposing scammers’ tricks, available in Mandarin and Cantonese, in addition to web pages published entirely in Chinese. 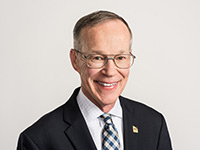 As the 50-plus population grows more diverse, AARP looks forward to continuing to play a positive, vital role in addressing each community’s needs throughout life’s stages.