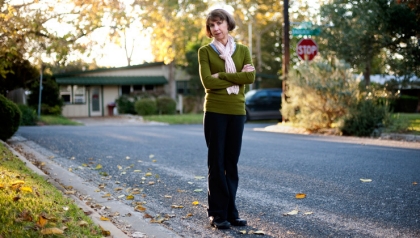 Ruth Joy Bryant wants to get back to the active life she had before a recent fall fractured her ankle, putting the 92-year-old Austinite in the hospital and into daily physical rehabilitation sessions.

Bryant did so well her doctors sent her home with instructions to walk as much as possible. Unfortunately, her block does not have sidewalks, and it is not safe for Bryant — who uses a walker — to be in the street alone, so she has a neighbor take walks with her.

Bryant's situation shows why a "complete streets" initiative, promoting streets designed to be shared by motorists, pedestrians, cyclists and wheelchair users, is one of many AARP legislative priorities for the upcoming session that opens Jan. 8.

"Complete streets are important because as people age, mobility tends to be an increasing concern," said Amanda Fredriksen, advocacy director at AARP Texas.

Another AARP legislative priority is establishing standards for the new "smart meters" that some Texas energy suppliers are installing in homes. The meters store a large amount of information on residents' electric use, which can help a utility and its customers make wiser usage decisions.

But the utility company can provide the data to third parties. Consumer advocates are concerned that could lead to invasions of privacy.

Austin resident Carla Penny, a member of the AARP Texas executive council, said it could become a security issue.

"How easy would it be for criminals to infer from the patterns of usage when a home was empty?"

AARP Texas also plans to advocate for continued state funding for home- and community-based services that allow people to defer moving to a nursing home as long as possible.

Next page: Is Texas eliminating the defined benefit retirement pensions of state employees? »

Thirty-seven states have a lower percentage than Texas of people with lighter care needs who are in nursing homes, according to a recent report released by the Commonwealth Fund, the SCAN Foundation and AARP.

"This means Texas is not doing as good a job as other states in screening and diverting individuals to community-based care, when it's appropriate," Fredriksen said. "Seniors want to remain in their own homes, and it's a lot less expensive."

She noted that programs that help provide home- and community-based care cost about a fourth as much as nursing home care.

"As our population continues to [grow older], it is vitally important for us to ensure that seniors have access to long-term care in a variety of settings," Nelson said.

Another AARP legislative priority is to oppose any attempts to weaken or eliminate the defined benefit retirement pensions of public school teachers and state employees.

It's an issue with personal importance to Leonard Strub, 70, of Allen, a retired state university employee. When Strub was working, he put away savings in addition to his pension and Social Security, in order to have financial peace of mind for his retirement. But without the defined benefit plan from the Teacher Retirement System of Texas, "I wouldn't be able to maintain my quality of life," he said.

"Folks who paid into public pensions took their job — and tended to take less pay than in the private sector — with a promise that if they gave so many years of service, they would get [a certain amount]," Fredriksen said. "We think it's important to keep that promise."

To volunteer to become an AARP Texas legislative activist, contact Amanda Fredriksen at aarptx@aarp.org. Keep up with the latest legislative issues that impact you by signing up for the AARP Advocate email newsletter.

Louis B. Parks is a freelance writer based in Wimberley, Texas.