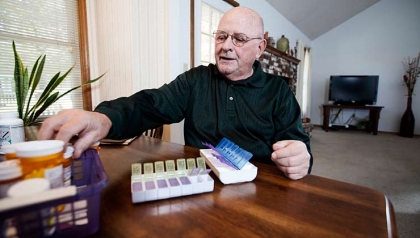 Tom Beisner, 74, of Joplin, favors immediate action to stabilize Social Security and Medicare. But two-thirds of Missourians who filled out a questionnaire say changes should be gradual.

A strong majority of Missouri residents who weighed in on the future of Medicare and Social Security say some changes to benefits and revenue are needed so the programs will be available to their children and grandchildren.

"I don't think the country can keep going on the way it is from a financial standpoint," said Joplin resident Tom Beisner, 74. "Something has to be done."

Beisner's support for immediate action isn't widely shared among those who completed AARP-sponsored questionnaires about the programs. Two-thirds don't want any major changes to Medicare or Social Security immediately.

"So many people are afraid [the Medicare eligibility age] is going to be raised or benefits cut," said Hannibal resident Marge Capp, 78, an AARP Missouri volunteer who coordinates the state chapters.

"There are a lot of people who are very concerned about whether the prices are going to be raised," she said.

Beisner and Capp were among the roughly 51,000 Missourians who filled out questionnaires about Medicare. Nearly 22,000 responded to the Social Security questionnaire.

The responses were collected at AARP Missouri events, on a website, by phone and from questionnaires printed in the AARP Bulletin.

The results were provided to Missouri congressional candidates. The responses from across the country will inform AARP's advocacy next year as policymakers consider the future of Medicare and Social Security.

Medicare trustees say the hospital fund will be exhausted in 12 years. Social Security trustees project that the program can pay full benefits only through 2033. After that, payments to beneficiaries would drop to about 75 percent.

When the new Congress convenes next month, policymakers are likely to consider changes to the programs, including an increase in the amount of income subject to the payroll tax that finances most of Social Security and some of Medicare, benefit reductions, an increase in the eligibility age for both programs, a curb in the cost-of-living increases for Social Security beneficiaries and higher Medicare premiums for higher-income enrollees.

No consensus on funding

Among Missouri residents who filled out the questionnaires, none of those options was fully embraced.

In fact, 40 percent said "none of the above" was the best source for additional Medicare funding when asked to choose among general federal revenues (24 percent), higher payroll taxes (26 percent) and higher Medicare premiums (9 percent).

Next page: More findings from the survey. »

"I think the survey results are pretty reflective of where people are in their lives," said Craig Eichelman, AARP Missouri state director.

"The older members seem to think there are less problems with Medicare. And younger members are kind of split on how much Medicare is really in crisis and how much of it can be changed to keep it stronger for current and future generations."

DeAnn Smith is a writer living in Independence, Mo.