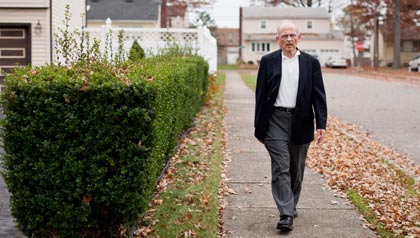 David Mollen, of Union, has seen how New Jersey’s Board of Public Utilities protects consumers and wants it to continue to oversee Verizon and two smaller companies that provide basic telephone service.

En español | David Mollen has seen firsthand the power of the state Board of Public Utilities (BPU) to protect consumers.

Mollen, 69, of Union, still bristles over his months-long battle with AT&T years ago to get a persistent wiring problem in his home phone corrected.

That ended when he called the BPU.

"Within 20 minutes I had a call from AT&T. … And then the problem was solved. It's a very clear signal to me of the value of the Board of Public Utilities."

Today Mollen is adding his voice to a growing chorus opposing legislation ​(S 2664/A 3766) that would release Verizon and two much smaller phone companies — Warwick Valley Telephone Communications and CenturyLink, which operate mostly in the state's sparsely populated northwest — from BPU regulation. Only basic, stand-alone residential and single-line business service is regulated by the BPU.

Passage of the bill would mean state regulators would no longer hold sway over the telecom giant, which now must file reports monthly on everything from service complaints to dial tone speed.

The legislation also would remove a requirement that the regulated companies offer a minimum basic rate for bare-bones service without long distance. That service costs consumers $26.89 per month, including about $10 in federal and state taxes and fees.

Earlier this year, Johnston helped mobilize a campaign that generated some 18,000 phone calls to lawmakers' offices in opposition to the bill.

"This bill is radical," said Stefanie A. Brand, director of the Division of the Rate Counsel, which advocates for the state's utility consumers.

Because it's considered "proprietary information," the BPU won't say how many customers would be affected. Verizon refuses to disclose how many of its roughly 2 million subscribers have the bare-bones service.

Verizon spokesman Lee Gierczynski said the legislation is needed to offset a "competitive disadvantage" with cable companies like Comcast and Cablevision that also offer phone service but aren't similarly regulated.

The bill's opponents have formed a coalition that includes AARP New Jersey, the New Jersey State League of Municipalities and the Communications Workers of America, which represents 1,600 New Jersey Verizon workers.

The legislation overwhelmingly passed the General Assembly in February but stalled in the Senate. It is expected to resurface during the current lame duck session.

State Sen. Bob Smith, D-Middlesex County, called the legislation "a stinker of a bill" in an interview with the AARP Bulletin. His primary concerns are the loss of the minimum phone rate and removing BPU oversight. "There's no redress, no remedy for the consumer."

But Assemblyman Jon Bramnick, R-Union County, a co-author of the bill, said Verizon and the other companies would be kept in check by lawmakers. "This legislature would not allow seniors to be penalized."

Assemblyman Paul Moriarty, D-Gloucester County, is one of seven lawmakers who voted against the measure. He said basic phone rates would skyrocket without regulation. "And that would disproportionately impact older people and seniors."

Studies show that in some states, rates climbed dramatically after deregulation. In California, the increase was 50 percent.

Verizon's Gierczynski doesn't dispute the findings, but argued that prices in those states were "so artificially low that when rates were brought up to reflect actual costs, it looked dramatic."

But he won't predict an outcome here, adding, "You're asking us to look into a crystal ball."

AARP and other coalition members are supporting an alternative bill sponsored by Smith (S 3062) that would retain the BPU's authority over the companies, streamline some regulations and expand others.

Johnston called it "a smart and balanced regulation bill ... that, while eliminating outmoded and/or redundant regulations maintains essential oversight of these lifeline services and protects all consumers." He said AARP New Jersey is mobilizing volunteers for a telephone campaign to support S 3062. To contact your legislator, call 1-800-844-2272.

Jim Hooker is a freelance writer living in Lawrenceville, N.J.