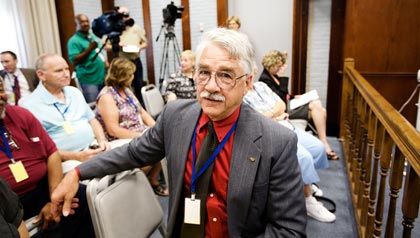 En español | Less than a year after receiving a $44 million increase in its electric and natural gas rates, Ameren Illinois has asked for an additional $90 million rate increase.

If it's approved by the Illinois Commerce Commission (ICC), typical residential customers would pay up to $3.78 a month more for electricity delivery and $4.53 a month extra for the piping of natural gas. A decision is expected in January.

AARP Illinois, along with the Citizens Utility Board and Illinois Attorney General Lisa Madigan, D, is fighting the proposal, which was scaled back from an original request of $111 million.

"We shouldn't have to foot the bill to help the utility pump up its profits," she said.

Dean Clough, 66, a member of AARP Illinois' volunteer Executive Council, told the ICC at a public hearing in August: "Millions of consumers are bracing for another possible recession. This is the worst possible time for Ameren to greedily demand that they pay more for the service they receive."

Ameren Illinois, which serves 1.2 million electric customers and more than 800,000 natural gas customers in central and southern Illinois, was formed in 2010 by the consolidation of three of Ameren Corp.'s affiliate utility companies.

Since 2007, the Ameren Illinois utilities have filed rate requests totaling $563 million and been granted nearly $206 million.

Ameren says the current rate request is necessary to upgrade the utility's infrastructure and to replace an aging vehicle fleet.

"There is no good time for a rate increase, and there is only so much we can do to cut costs," Jacqueline Voiles, Ameren Illinois director of regulatory affairs, told the ICC.

AARP Illinois and consumer advocates argue that the roughly $50 more per year that utility customers would pay could be a hardship, particularly for older and low-income ratepayers.

"On average, low-income individuals over the age of 50 in Illinois spend 14 percent of their annual household income on utilities," said Scott Musser, AARP Illinois associate state director for advocacy. "If this rate increase is approved, it would have a particularly damaging effect on the wallets of seniors and low- and middle-income families."

About 10 AARP volunteers attended the August hearing, part of the association's effort to inform the ICC of its opposition to the rate hike. Volunteers also have participated in news conferences around the state, written letters to newspaper editors and filed comments on the ICC's website.

"These rate increases keep going up and up, and do these companies know what this means to seniors?" asked Marguerite Culton, 84, an AARP volunteer from Springfield.

Barbara Schmidt, 75, of Litchfield, told ICC Administrative Law Judge Stephen Yoder that "consumers are sacrificing and doing everything they can to be energy-efficient, but these rate increases are becoming a hardship." She asked Yoder to "deny this rate increase."

Frank Price, 69, an AARP volunteer from Springfield, said Ameren should pay for the improvements out of its profits. "They seem to have a lot of profit."

Gerardo Cardenas, AARP Illinois communications director, said the fight over the Ameren rate request is just one part of a broader battle between consumer advocates and the two major utilities serving Illinois — Ameren and ComEd. The utilities are also lobbying for the legislature to overturn a veto by Gov. Pat Quinn, D, of a bill that would allow them to increase electric rates every year for the next decade while diminishing the ICC's regulatory oversight.

"If AARP doesn't do anything, if we don't raise our voice … the utilities are going to continue to increase rates and balance their profits on the backs of Illinois consumers," Cardenas said.

Thomas Schuh, 80, an AARP volunteer from Springfield, noted that times are tough. "I didn't get a pay increase the last two years, so they shouldn't get one either."

Sarah Caraher is a journalist based in Chicago.