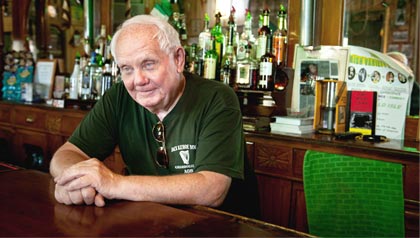 Girardville bar owner Joseph Wayne, 70, switched suppliers when electricity generation was deregulated in his area. He says it’s difficult to discern whether he has saved any money.

Utility customers won't be forced to pick a power supplier, the chairman of the Public Utility Commission has promised. Nonetheless, consumer advocates, including AARP Pennsylvania, are closely monitoring the outcome of the agency's study of the electric utility system.

"AARP has believed the [PUC] investigation is intended to make a determination about the future of default service providers," said Ray Landis, AARP Pennsylvania advocacy manager.

See also: 15 tips to save on home energy costs.

Most residential and commercial customers have been able to buy power from independent suppliers since January while still having their electricity delivered by companies regulated by the PUC.

Rate caps established in 1997 were lifted late last year and in January. As a result, the part of the utility bill that reflects the cost of generating electricity increased for some customers.

In some areas of the state where more than one power-generating utility operates, customers can compare prices and switch to a less expensive supplier. The delivery utility remains the same. Customers also have the ability to keep their original supplier — called the default supplier.

The PUC is reviewing how the default supply system is working since the rate caps expired.

"I want to state for the record … the default supply is not going to go away," he said. "If my father, who is a PECO customer, does not pick an alternative supplier, default supply will be there for him."

In a letter to the editor published in a Harrisburg newspaper, Powelson wrote that "the question is who provides [electricity] and the manner in which it is provided."

Landis said AARP Pennsylvania's concern is "that we're going to change a system that seems to be working for consumers."

AARP Pennsylvania and other consumer advocates want to make sure customers' option to keep their default supplier isn't eliminated and that those who remain customers of a default supplier don't see higher prices.

Although customers won't lose their "shop or not" option, Powelson said the way utilities buy power might change after the PUC's study concludes in April.

Changing the way power has to be purchased, Landis predicted, "is inevitably going to lead to higher prices for the default power."

Sonny Popowsky, the state's consumer advocate, said under the current system, "we have some assurance that all customers will have a source of supply from [a utility] who goes out and buys at the lowest cost available and passes that on to the consumers. Without that, we really don't know what would happen."

The current system is very good, he said, but not perfect. "It can be changed. It can be improved. I just want to be sure that, if anything, we strengthen the model, not weaken it."

What happened in August with about 8,500 customers of a supplier in central Pennsylvania is "an example of how customers will fare in the competitive market," Landis said. "Companies can decide to serve them or not serve them."

Dominion Energy Solutions dropped the customers, many of them retirees. Dominion said the customers used so little power — but much of it during expensive peak midday hours — that it would have been cheaper for the customers to get their electricity from PPL, their default supplier.

You may also like: Even more ways to trim utility bills. >>

Kathryn Canavan is a writer living in Wilmington, Del.